The Media in the Recent War on Gaza

Paul Beckett is the newest addition to the growing family of Rag Bloggers. We are grateful he found us and wants to participate in the effort we have undertaken. 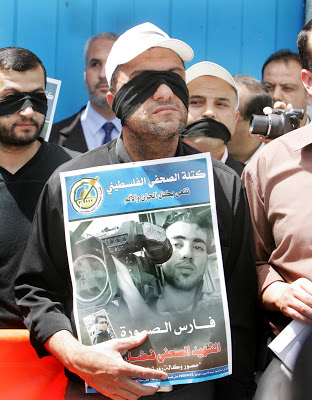 Journalists protesting against censorship outside the UN office in Gaza in September 2008. Photo: Mohammed Omer.
Creating Eyelessness in Gaza: Israel Controls the Old Media – But What About the New?
By Paul Beckett / The Rag Blog / February 12, 2009

Israel’s attack on Gaza was meticulously planned, over a six-months period. (Ilan Pappe and others have reported that a mock-up Gaza target city was constructed at a cost of millions in the Negev, and IDF soldiers practiced urban destruction for months before December 2008.)

Just as meticulous – and lasting just as long – was the planning for the media-control operation to accompany the military one.

When Israel invaded Lebanon in 2006 the spin had spun totally out of control as free-range journalists on the ground documented the killing, displacement and destruction (and the prolific use of weapons such as cluster bombs and bunker buster bombs against civilian targets). Very embarrassing for Israel (not to mention Condoleezza Rice!).

There must be a better way to suppress journalistic truth. Imbedding complaisant journalists with the IDF troops? Stricter filtering of applications for press passes (only the extremely safe need apply)? More effective censorship?

Ah! Then the wonderful idea came: how about no first-hand journalistic coverage at all! Genius!

Jon Snow’s U.K. Channel 4 show called “Unseen Gaza” (January 22, 2009) reports on his experience with the Israeli operation, first hand. With Israel’s attack (timed to begin in the American Christmas holiday week when nobody would be watching anyway), all the international media sent reporters. They were welcomed at the Press Accreditation Centre with a display of Hamas rocket debris. (That set the tone.) They were issued briefcase-loads of slick-paper reports and booklets laying out the “background story” for the journalists. Then, they were installed on a hill in southern Israel with a distant – really distant! – view of the edge of the Gaza Strip.

Visits to Sderot and the other Jewish towns that had taken Palestinian rocket fire (usually, but not always ineffectual) were furnished lavishly.

But not one journalist was permitted into the Gaza Strip.

Reporters or photographers who tried to jump the reservation were detained and sometimes had their discs erased.

The reporters watched and filmed white smoke and grey smoke and black smoke as, sporadically, it appeared over what they were told was Gaza City. They heard the dull thump of heavy bombs from time to time.

Sitting and standing there ineffectually, aware they were being used by Israel, reporters called it with sour humor, the “Hill of Shame.” Then “Hill of Same” because every day they wrote, called in, and photographed the same.

“Shame” is indeed appropriate. The reporters groused among themselves, but to my knowledge not one major Western news organization protested vigorously and left.

The media control operation was effective. On their hill, the reporters saw nothing they were not supposed to see. (Jon Snow remarks that often, as they called in their stories to London, the home office knew more than they.)

Now an interesting fact is that many of these organizations were in touch with Palestinian stringers in the Gaza Strip. They had access to the horrific reality of children blown apart, of white phosphorous wounds that burn and burn and burn in the flesh until they have burnt to the bone. They had access to shots of the hospitals where Palestinian doctors worked double and triple shifts trying to save some while others died at their feet. They had access to shots of the U.N. schools where hundreds of the homeless were pressed together to sleep on floors without water or electricity – and then (in several cases) were bombed and shelled by the Israeli forces (who had the precise coordinates of every rock and brick in Gaza, let alone the schools).

But of course, for the most part, the Western journalists on the Hill of Shame couldn’t use these, could they? After all, they had not seen these things “first-hand” with their own, highly-paid and officially-accredited, professional-journalist eyes.

Further, the gruesome pictures were much too strong (in their judgment) for their Western audiences, accustomed to infotainment. Snow permits us to listen to the self-justifications of several UK journalists or media managers (and these were not even the Americans!).

Was it a triumph for the Israeli Press Office? Well, certainly the media operation had gone exactly as planned.

Almost. What went wrong? Al Jazeera. Al Jazeera was there, and they stayed, and they were able to broadcast out. This best of the international news media ate the lunch of the Western big-name media organizations (as they’ve been doing now for years). They just told what they saw. And showed it. As much as would be humanly possible given the brutality of the attack, they even dutifully parroted Israeli official statements for balance. It was just good old-fashioned journalism in the midst of falling bombs, tank shells, and white phosphorous.

So half the world was seeing exactly what was going on. For Israel, it was not the important half. The all-important (for Israel) U.S. TV audience saw and heard only what they were supposed to.

But arguably the audience for Al Jazeera’s work was the most important part of the world. It included the entire Arab and Muslim world. And it included the younger generations everywhere, more internet-savvy, watching Al Jazeera live via Livestation, or trading clips via YouTube.

Israeli media-control failed to control the plain, good, fair, honest and old-fashioned television journalism of Al Jazeera. Meanwhile they firmly put themselves in the category (a Hall of Shame?) of regimes such as Burma or North Korea. Alas, this is not anything very new for contemporary Israel (and that’s a shame).

But there is still something else to this story, something unexpectedly heartening. There was another kind of media-control failure. This comes from the people themselves, and it is something (relatively) new in the world. This is ordinary Gazans filming blasts, wounds and killings with their cell-phones and sending out their stories. This is youthful Facebookers and bloggers who are telling the incredulous world what they’ve just been through.

This is what a new kind of media looks like, and what a new kind of democracy looks like. It’s difficult for authorities like the Israeli ones to control. Its devastating power is that people are just telling the truth, one to another. In this increasingly saddening world of ours, this is something to be excited about!

[Paul Beckett lives near a small lake in the university town of Madison, Wisconsin. In the past he lived in Nigeria and he co-authored books and wrote articles on Nigerian and African politics. Now he is active in a number of progressive causes and organizations including The Madison Institute, the Progressive Roundtable, and the Madison-Rafah Sister City Project. He is films librarian for the latter. Much of his reading and writing now focuses on the Israel-Palestine situation. He is on the lazy side with all too many recreational interests but might manage to do a book on Israel-Palestine next year. He can be reached at snkbeckett@yahoo.com.]

1 Response to The Media in the Recent War on Gaza