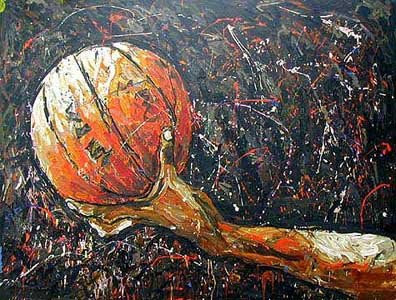 Even if you’re not a basketball fan, if you’re not watching the Spurs-Hornets matchup in the NBA Western conference semi-finals, you are missing some show! Last night’s game, the second win in two games for the upstarts from New Orleans, was absolutely jaw-dropping, as young point guard (and league MVP runner-up) Chris Paul took multi-MVP Tim Duncan, as well as San Antonio stars Manu Ginobili and Tony Parker, to school. Literally running circles around the lightning-fast Parker, Paul is the quickest thing on the court since kangaroos, with an arrogant, self-assured ‘tude reminiscent of M. Ali when he was still lean and hungry Cassius; there’s also a definite footwork resemblance!

The 22-year old is being compared to a lot of aged NBA stars, but so far I haven’t heard today’s wannabe Cosells state the obvious — they’ve been wrong too many times — but this is the next Michael Jordan. MJ transformed his team, the lackluster Chicago Bulls; transformed the game of basketball as sport, spectacle, and business; and is still the ideal of aspiring young hoopsters worldwide. Chris Paul is gonna do and be all that, too, and be just as much fun to watch. It will be interesting to see how this series plays out when the inexperienced Hornets, who nonetheless have home court advantage over the reigning NBA champs, play game 3 Wednesday night in San Antonio. And LA’s Kobe Bryant, with the Lakers facing a tough opponent in Utah, better enjoy his MVP-ship this year; good as he is, there’s a new kid down on the block.

Meanwhile in the East, the Boston-Cleveland matchup is shaping up as a thriller, although Boston exits game two tonight with a two game lead. League-leading Celts’ star Ray Allen was held scoreless for the first time since 1997, and the Cavs’ LeBron James had an extremely poor shooting night as well. When the heavy hitters on either of these teams start hitting, it’s likely to be contagious! The series moves to Cleveland on Thursday, and I’m hoping for overtime! Also in the East, Detroit had handed Orlando two straight defeats without a lot of trouble. One young Pistons fan seen on teevee during Tuesday’s game two — who ironically was a ringer for the movies’ “Harry Potter” — had the real deal on this series painted on his chest: “THERE’S NO SUCH THING AS MAGIC.”

Well, almost no such thing. Anybody know when quidditch season starts?

This entry was posted in Rag Bloggers and tagged Sports. Bookmark the permalink.