Thomas McKelvey Cleaver : ‘Crossing the Rubicon’ at the Gulf of Tonkin 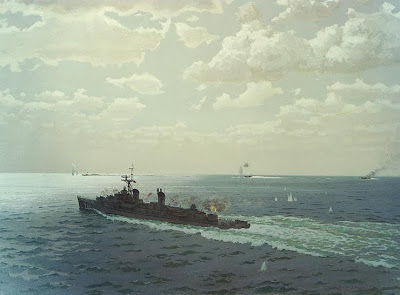 It’s an event I can never forget, because I was there, a young sailor working in the operations office of the Admiral in charge of the two destroyers.

Today, August 4, is the 46th anniversary of the attacks on four North Vietnamese ports by the U.S. Navy, ordered by President Lyndon Johnson in response to reported attacks during the two days previous by “North Vietnamese torpedo boats” against two American destroyers cruising in “international waters,” the USS Maddox and the USS Turner Joy.

It became the causus belli for direct American military involvement in the Vietnam War, known forever after as the “Tonkin Gulf Incident.”

It’s an event I can never forget, because I was there, a young sailor working in the operations office of the Admiral in charge of the two destroyers. The Seventh Fleet Patrol Force operated extensive reconnaissance networks, from off Vladivostok and the Soviet Far East in the Sea of Japan, down the coast of China to Taiwan and on down to the South China Sea. The initial story, that the two destroyers had been patrolling in the Gulf of Tonkin, in international waters, immediately set off alarm bells to me.

That was because I knew, having worked to set up the briefing for the Admiral the week before, that these two destroyers were operating in support of something known as a “34-Alpha” operation, and that they were very close to Hon Me Island, a piece of real estate in the middle of the Gulf of Tonkin internationally recognized as being part of North Vietnam. My doubts grew more when I got mail from home the following week, with newspaper clippings on the event. Not one of the maps published in the newspapers showed Hon Me Island as even existing.

A month later, we were in Subic Bay, the Philippines, and I was on liberty in Olongapo. I walked into a bar and there sitting at the bar was a sailor I had met a year previously, when he and I went through fire fighting training in San Diego while awaiting transportation to Japan to join our units.

The last time I had seen him, he was a Fire Control Technician 3rd Class, a petty officer. Now he wore Seaman’s stripes on his sleeve. We talked, and things finally got around to how he’d “lost his crow.” He told me he’d been court-martialed. That didn’t surprise me, it happened all the time, if a Captain was upset about some kid coming back off liberty late and wanted to make an example of him. “What for?” I asked. “Disobedience of a direct order,” he replied. That wasn’t some late-liberty offense.

“What was the order?”

And then he told me the story.

He was crew aboard the USS Maddox. During the second night, when the two destroyers were reported under attack by several torpedo boats, he was in charge of the fire control tower, responsible for operating the main armament of six five-inch cannons. When ordered to “open fire,” he refused and told his captain that the only target out there was the other destroyer, the Turner Joy. The order was repeated and he refused again. It was repeated a third time and he refused again.

A Chief Petty Officer was sent to arrest him. By the time he was brought to the bridge, the event was over, with the captain of the Turner Joy having established by radio that the torpedo boats had “disappeared.” Still, my friend had refused the order, and was given a general court-martial, where he lost his rank. I’ll never forget the last thing he said: “That whole story is bullshit. Nothing happened out there.”

A year later I was out of the Navy and people would ask me why I was opposed to the war, and I would tell them that story. They’d say “where’s your proof?” and I would have to admit it was somewhere in some sub-basement of the Pentagon, wrapped in a Top Secret clearance. And so not many believed me, it was just too much to take in, that the war was started on such a lie.

Yet, over the years, the story did come out in bits and pieces.

In 1966, an officer I knew who had been part of the Admiral’s staff gave an interview to a newspaper in New York, where he told of how he had interviewed the Chief Sonarman on the Maddox, and that he’d been told there were never any sounds of torpedo boats in the water — a distinctive sound that is unmistakable for anything else.

In 1968, Professor Peter Dale Scott of UC Berkeley interviewed the former Assistant Gunnery Officer of the USS Turner Joy, who related how he had convinced his captain not to open fire that night, because the only target out there was the USS Maddox.

One can only imagine how history would read, had one of those two men been less conscientious in doing his job and had opened fire as ordered. As my friend had told me, “We were so close I’d have blown them out of the water with the first salvo.”

I remember in 1970, when Sixty Minutes ran the first story that told the truth about Tonkin Gulf, revealing that “34-Alpha” operations were code for South Vietnamese commando raids on targets in North Vietnam. The report went on to say that the available evidence looked like the two ships had been where they were to support the raid.

I sat down at my typewriter that night, and wrote the program, telling them what I knew. A week later, Joe Werschba, one of the legendary “Murrow’s Boys” at CBS, called me and told me they had proof my letter was accurate, because he had shown it to a senator in Washington on the Armed Services Committee who confirmed the main points.

And then in 1971 — 39 years ago last month — came the publication of the Pentagon Papers, and the true story of Tonkin Gulf was out there in all its detail. Several people I knew apologized to me for having doubted me over the years. I didn’t have any trouble with their doubt. I had wanted to doubt what I knew myself, because the implications were enormous:

My government lied and millions of people died.

I date my personal political “revolution” to this day, 46 years ago. The day I found that the country I had grown up believing in, that 10 generations of my ancestors had fought and died for at times and in places that made us who we were, that that country didn’t exist.

America has a long history of being lied into wars.

The War of 1812 was far less about “freedom of the seas” and far more about an attempt to grab Canada.

In 1846, Abraham Lincoln stood up in the House of Representatives and demanded that President Polk “point on a map” to the spot where American blood was shed on American soil — Polk couldn’t do it because Taylor’s cavalrymen weren’t in Texas — which wasn’t part of American territory to begin with — they were in territory recognized as part of Mexico, and America was off on its first grand imperial adventure, “liberating” half the territory of Mexico.

In 1876, President Grant decided it was easier to declare war on the Sioux under the pretext they were “killing whites” than to enforce a treaty and expel the thieving miners from the Black Hills of South Dakota.

In 1898, an accidental explosion on a poorly-maintained American ship was taken by William Randolph Hearst and turned into “a splendid little war” that expanded the empire by taking the Philippines and eventually involving us in our first genocidal Asian war, the Philippine Insurrection, which resulted in the deaths of 20 percent of the population of the country over five years, including the near-total annihilation of the population of Panay Island, an event celebrated by the commander of the troops responsible for killing 40,000 Filipinos as “leaving the island a howling wilderness,” which prompted Mark Twain to write the famous “War Prayer” in response to the news.

It took a lot for me to finally understand there is a difference between loving one’s country and supporting the government. It’s not surprising at all that most of my fellow citizens can’t bring themselves to see the lies and do something about them.

[Thomas McKelvey Cleaver is an accidental native Texan, produced screenwriter, and journalist who is frequently accused by his fellow lefties of not being left enough. Being shallow enough to have written successful horror movies and articles about Second World War aviation, he won’t argue the point. But he does take pride that he personally raised $350,000 for Obama in 2008 and has been an activist on anti-war, political reform, and environmental issues for almost 50 years. It should count for something.]

This entry was posted in Rag Bloggers and tagged Gulf of Tonkin, Imperialism, Military, Thomas Cleaver, Vietnam. Bookmark the permalink.

2 Responses to Thomas McKelvey Cleaver : ‘Crossing the Rubicon’ at the Gulf of Tonkin