BOGOTA, Colombia — I had lunch this week with Alejo, I can say his name without worrying that he’ll be moved up higher on a target list because he, and the group he works with, the Conscientious Objectors Collective, are already so out there, I doubt anything could add to their profile.

(One public act a few years ago was to follow a military parade with brooms, and “sweep up the trash the Army left” while handing out antiwar pamphlets. In Bogota! Remember, there’s a war on in Colombia.)

Alejo is around 25 and he’s been with the Collective for at least eight years. He’s finished his work for a university degree, but because he has not served in the military, nor gone through a process that would allow him to buy an official exemption (as he says, “This would also give the government more money to continue the war”), he has not received his degree. 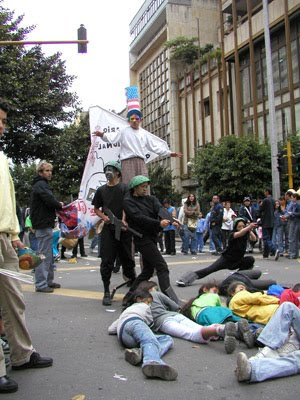 Street action by Concientous Objectors Collective in Bogota. Image from website of Concientious Objectors Collective.
The COs’ Collective is a group of young men and women in Colombia who work to promote a nonviolent lifestyle. Not only do they oppose the obligatory military service required of all young Colombian men, but also the other sorts of violence that young people get involved with: gangs, guerrilla and paramilitary groups, drug traffickers, and so forth.

They currently are working in high schools in seven cities to help young people understand the option to be a CO, and have just won their first Supreme Court decision supporting the rights of CO’s.

They have organized networks in other cities, too, and now have ID cards from War Resister’s International (WRI) identifying them as CO’s, so that when the military stops a bus, and checks all the young men for their draft cards (libreta in Spanish), with the intention to take all youths who have not served to the base for immediate induction, they are left alone, mostly, because, “They know it’s not worth it to take one of us in, because we have a network that will respond immediately, and the publicity is very bad for them.”

Small victories, perhaps, but important ones. I know there are young people (and not so young ones, too) in the U.S. who are looking for ways to carve out lives not beholden to the military-industrial complex. I’d love to hear their stories.