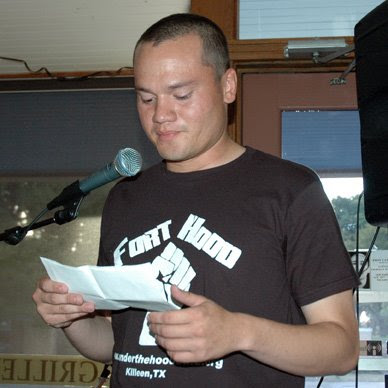 Victor Agosto speaks at Austin benefit for Under the Hood Cafe. Photo by Carlos Lowry / The Rag Blog.
Soldier of conscience to be court-martialed
SPC Victor Agosto refuses deployment and faces incarceration

A victim of the highly unpopular stop/loss policy, SPC Agosto, whose contract was over at the end of June, was told that his next assignment would be deployment to Afghanistan. At the end of April, with support of local residents, Agosto went public with his intent to refuse the orders to Afghanistan, on the basis of the occupation being “immoral and unjust.”

Instead of going “underground” and trying to escape punishment from the Army, Agosto chose to remain at Fort Hood as a tangible symbol of GI resistance. Refusing all orders that directly support the war, he has found himself in an overwhelming struggle to maintain his honor and position. His court-martial will culminate with the sentencing portion of the trial, at which, it is believed that the Army will enforce the highest form of sentencing it can impose.

SPC Agosto’s attempt to raise awareness and support has not fallen on deaf ears, even in a military community; he has found supporters and friends who are willing to help. As the unit serves overseas, he continues to voice his dissent for an “unjust” war. There will be demonstrators present the day of his arraignment, located off-post due to military regulations concerning demonstrations on military posts.

Supporters are urged to gather to support Victor Agosto from 7:00 to 8:30 p.m., Wednesday, August 5th, at the Fort Hood East Gate in Killeen, Texas. SPC Agosto’s attorney, James Branum will be available for interviews and will read a public statement by Victor Agosto.