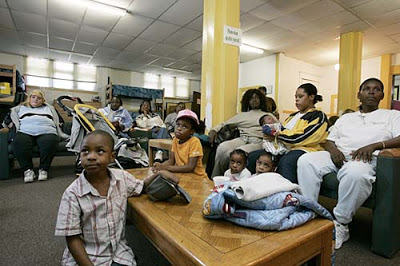 People at Mom’s Place, a homeless shelter in Detroit.
Photo: Ankur Dholakia / The Detroit News.
A Post Racial America?
Are we anywhere NEAR there yet?
By Zwarich / The Rag Blog / November 15, 2008

A very good article from a young Black activist, Austin McCoy, was published this morning and is deservedly being circulated. In this deeply thoughtful article, Mr. McCoy digs deeply into the difficult questions on race that are being posed after this historic election. I don’t think that he digs quite deeply enough, however, to get to the basic roots of human racial animosity.

Human beings have an innate instinct to organize ourselves into groups. Many other higher mammal species, (bears for example, or many species of cats), lack this instinct completely. Among species that have this group instinct, individuals use key clues to recognize members of their group, and they have innate fear and hostility toward individuals of their own species who are not members of their own self-identified groups. Race is one of the most basic ‘keys’ that is used by humans as a basic group identifier.

Much of our struggle, as humans, to be ‘civilized’ is an exercise in trying to rise above our instinctive animal nature. This is certainly the case as regards to racial animosities.

But in this noble quest to become ‘civilized’, we must remember that racial animosity is nearly universal among human societies, and is no more prevalent among any race than among any other. (To suppose otherwise is itself a racist notion).

As we all know as American progressives, (living in a nation that was founded on slavery), racism is often socially institutionalized. But even in societies in which institutional racism has been largely discredited and renounced, (I don’t think we yet deserve to claim to be a ‘post-racial’ society, but the recent election is certainly an historical milestone in that direction), virulent racial identification, competition, and animosity remain widespread among lower economic classes.

It is among these poorest classes where competition for the necessities of survival is most intense. To address their self-perceived best chances to succeed in this competition, individuals use race as the most obvious key identifier of their own meta-groups. They then commonly divide themselves into smaller groups, identified by more refined keys, (such as color of headband one wears, etc). But even in the midst of fierce competition between these smaller groups, they retain their identification with their race, in direct competition with other races, as their meta-group.

The most virulent racism in America exists at the lowest end of the scale. In prisons, it is often impossible to survive at all unless an individual joins the group identified with her or his own race, for protection. Even if one does not personally harbor attitudes of racial animosity, one must take them on in order to enjoy the protection of her or his own ‘kind’.

Racism almost as virulent as in prison is also found among the poorest classes, and it is found more or less equally among and between all races. Poor Hispanics, Blacks, Asians, and Whites, (to mention only some), are victims in equal measure and proportions of the race-based animosity they learn and foment against one another. They perceive themselves as competing directly in the economy for a slice of a pie that is too small for all to receive their fair share.

In upper economic classes, at least within societies in which institutionalized racism has been discredited and largely overcome, better educated individuals are able to overcome their more primitive instincts. It doesn’t matter what race we are talking about. As people, of any race, become better off economically, and especially when they are better educated, they are dramatically less inclined to feel hateful racial animosities toward people of other races. (Again, this is mostly restricted to societies which have advanced to a significant degree beyond institutionalized racism, which we surely must agree that the US has, even recognizing the distance we have yet to cover).

I think that many well-educated white Americans do not see Barack Obama as a Black man at all. They only see him as a man whom they admire. It is my perception that it is more difficult for many African Americans, even well educated African Americans, to understand this, due to the painful legacy they have overcome. Many militant African Americans still bitterly and angrily denounce this as “impossible”. But I don’t think it is at all. I think that many Americans simply see Barack Obama in terms they admire. They do NOT see his race at all. I think that as his presidency progresses, that propensity for seeing completely past race in perceiving our president, (for good or ill), will increase. (We’ll see. There are other directions this could go).

During his campaign, Barack Obama failed almost completely, (by design it seemed), to address the issues of poverty that are the most important determinants of racism in our society. He addressed his concerns almost totally for the middle class, but had almost nothing to say about addressing or alleviating poverty. Many think he did so as a deliberate electoral strategy, to avoid being perceived as a ‘black candidate’. Perhaps…..And let’s hope so.

Let’s hope that this man who solicited our Hope so skillfully does not claim that America has arrived at a post-racial plateau. Let’s hope he has plans to address the virulent pockets of urban poverty, in what was being called just a few years ago, (before they fell off the radar entirely), the ‘permanent underclass’. Let’s hope he has plans to rekindle Hope where Hope itself died long ago, under the spirit-crushing oppression of multi-generational poverty. America will NEVER deliver itself into a ‘post-racial’ epoch so long as millions of our citizens, among our poorest classes, live lives from which Hope has long ago been banished by the soul destroying poverty in which they live.

Anti-racism activists take on a very noble cause, but they often don’t seem to realize that if their goal is to eradicate the human instinct to identify with one’s own racial group when basic economic survival is at stake among poorly educated people, they are very likely pursuing a futile goal. We all wish we could change human nature, but we cannot. Racism is deeply ingrained in human nature, and it is only by removing the factors that bring it to the fore, (poverty), and by augmenting the factors that suppress and overcome it, (general prosperity and education), that racism can be eradicated from human society.

We will never eradicate racism in America, (or anywhere else), until we eradicate the ghettos of poverty and deprivation where it thrives and festers.

This entry was posted in Rag Bloggers and tagged Poverty, Progressives, Race, Racism. Bookmark the permalink.