A Hole in Their Argument? : Krispy Kreme’s Pro-Abortion Donuts 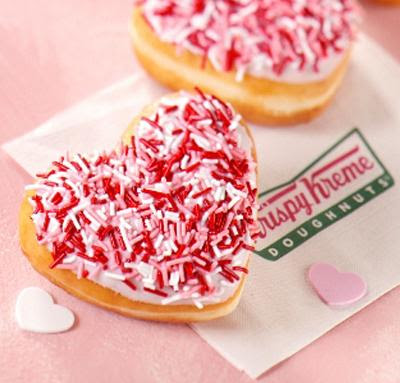 Jesus would undoubtedly want you to go out right now and buy a dozen donuts to support choice and abortion rights, so what are you waiting for?

Just in case you think that everybody in America is happy with everybody else today, and that Obama’s inauguration signals a New Day of tolerance, understanding, and freedom for all, think again! The ultra-right is still with us, still frothing at the mouth, and still willing to demonize anyone and anything that may even remotely interfere with their moralistic agenda.

Krispy Kreme donuts are criticized by some for their high caloric, low nutrition content, and because their slick advertising campaigns and specials have taken business away from Mom-and-Pop donut shops coast-to-coast. (Personally, I never touch any of these coronary depth charges!) But I couldn’t help but feel sorry for the fried-white-flour-and-sugar-treat makers today, when I read the following example of what’s going on in the teeny-tiny pointed heads of the anti-choice religious right. Jesus would undoubtedly want you to go out right now and buy a dozen donuts to support choice and abortion rights, so what are you waiting for?

The following comes by way of BlueDogDemocratNH at Democratic Underground, who said: “best part: this was sent to me by a Catholic priest who was laughing his ass off, and probably headed to the Krispy Kreme as soon as he read it.”

The next time you stare down a conveyor belt of slow-moving, hot, sugary glazed donuts at your local Krispy Kreme you just might be supporting President-elect Barack Obama’s radical support for abortion on demand – including his sweeping promise to sign the Freedom of Choice Act as soon as he steps in the Oval Office, Jan. 20.

Krispy Kreme Doughnuts, Inc. (NYSE: KKD) is honoring American’s sense of pride and freedom of choice on Inauguration Day, by offering a free doughnut of choice to every customer on this historic day, Jan. 20. By doing so, participating Krispy Kreme stores nationwide are making an oath to tasty goodies — just another reminder of how oh-so-sweet “free” can be.

Just an unfortunate choice of words? For the sake of our Wednesday morning doughnut runs, we hope so. The unfortunate reality of a post Roe v. Wade America is that “choice” is synonymous with abortion access and celebration of ‘freedom of choice’ is a tacit endorsement of abortion rights on demand.

President-elect Barack Obama promises to be the most virulently pro-abortion president in history. Millions more children will be endangered by his radical abortion agenda.

Celebrating his inauguration with “Freedom of Choice” doughnuts – only two days before the anniversary of the Supreme Court decision to decriminalize abortion – is not only extremely tacky, it’s disrespectful and insensitive and makes a mockery of a national tragedy.

A misconstrued concept of “choice” has killed over 50 million preborn children since Jan. 22, 1973. Does Krispy Kreme really want their free doughnuts to celebrate this “freedom.””

As of Thursday morning, Communications Director Brian Little could not be reached for comment. We challenge Krispy Kreme doughnuts to reaffirm their commitment to true freedom – to the right to life, liberty and the pursuit of happiness – and to separate themselves and their doughnuts from our great American shame.”

1 Response to A Hole in Their Argument? : Krispy Kreme’s Pro-Abortion Donuts