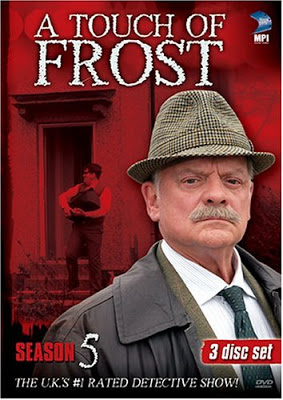 A Touch of Frost is an outstanding, fun British cop series that aired 42 exciting episodes from 1992 to 2010 (all of which are on Netflix and Netflix Instant, and many of which can be seen on YouTube). Here is the first episode.

Beloved Britcom star David Jason (Only Fools and Horses, The Darling Buds of May, Open All Hours) was asked by the show’s producers to star in a detective drama series, and only after he accepted did they decide to base it on R.D. Wingfield’s Frost novels.

The show was a long-running hit and won 11 awards and 13 other nominations (11 for Best or Most Popular Drama and 12 for Jason himself). Before and after A Touch of Frost, Jason earned 11 other top awards and five more noms for six other series. In the 2002 National Television Awards, Jason won both the “Most Popular Actor” award for A Touch of Frost and the “Most Popular Comedy Performance” honor for Only Fools and Horses (which a 2004 national poll chose as the best Britcom ever).

The series has aired in more than 20 countries, including Croatia, Lithuania, Finland, Japan, Brazil, and New Zealand. More than 92.8% of the 2,267 viewers who rated it at imdb.com gave it thumbs up, and 25.4% consider it a perfect 10.

In the fictional town of Denton (somewhere in Oxfordshire), Jason plays police detective inspector “Jack” Frost, an observant, acerbic, old-school, nonconformist investigator who has an unsatisfying home life but who is greatly respected by those who work under him. He is assisted by able, loyal detective sergeant George Toolan (John Lyons) and is often thwarted by his ambitious, social climbing, bureaucratic-minded boss, detective superintendant Norman Mullett (Bruce Alexander), with whom he has a consistently humorous (uncooperative) relationship.

Those were the only three characters who ran through all 15 seasons of Frost, but in every episode Frost was teamed with a different assistant, and his verbal byplay with them was always interesting and entertaining. Inspector Frost is full of wisecracks, and Jason handles the consistently clever dialogue masterfully.

Between takes, the cast (particularly David Jason) and crew were forever playing pranks on John Lyons (DS Toolan). They devised fake scripts which Lyons had to learn at short notice, involving ludicrous situations. Once they made his character wear a neck brace; another time they made him ferret around in a smelly rubbish bin, looking for evidence. Each time, Lyons vowed “You won’t catch me out like that again,” but he always fell for the next prank.

Because the Frost mysteries are so well written and played, and because Jason is so entertaining in the lead role, I have gone to Netflix Instant to enjoy them again. There is a very good chance that you will enjoy them too.