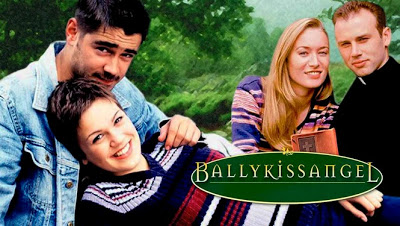 Ballykissangel was a quirky, small-town Irish drama that ran for 94 episodes in six seasons between 1996 and 2001 — making it the BBC’s longest-running drama series. More than 90.9% of viewers polled at imdb.com gave it thumbs-up, and 30.7% rated it a perfect 10. It was nominated for 18 awards in Ireland, Britain, and San Francisco, winning six (including Best Drama Series and Best Television Drama).

Four members of the cast won or were nominated for acting awards: Stephen Tomkinson as the earnest English Catholic priest sent to minister to this collection of rural oddballs, the late Tony Doyle as the greedy richest man in town, Tina Kellegher as his daughter, and Dirvla Kerwin and the cynical pub owner. Frankie McCafferty and Joe Savino were very funny as a couple of local boobs who try to help the rich man carry out his various schemes.

Other characters include a strict head priest, a dull straight-arrow cop, a nosy shopkeeper, a gruff lady veterinarian, a cheerful mechanic, a comical schoolteacher, an ancient farmer, a former monk, a female horse trainer, some mischievous kids and an Australian clergyman. With a cast this large, there is lots of plot — some dramatic, some comical, some romantic, and all of it pretty enjoyable.

The writing and performances were excellent, and the picturesque Irish countryside and cute little town were a treat. If you have any Irish relatives or ancestors, you will probably find this very hearty fare.

All episodes are on Netflix and many, such as this one, can be seen on YouTube.