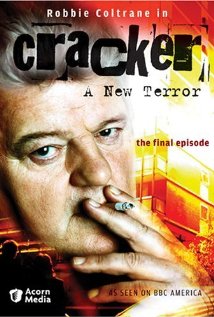 Former comedy star Robbie Coltrane is outstanding as an obese, alcoholic, degenerate gambler and psychologist who profiles sicko criminals for the Manchester Police.

One of the best crime series ever was Britain’s Cracker, starring a brilliant Robbie Coltrane. Three series originally aired from 1993 to 1995, a 100-minute special set in Hong Kong followed in 1996, and another two-hour story was broadcast in 2006. All 25 episodes are on Netflix and Netflix Instant, and most can be seen on YouTube. Here is an episode.

Obese Eddie “Fitz” Fitzgerald (Coltrane), smokes, drinks, gambles and cheats on his wife. He’s also a brilliant criminal psychologist, or “cracker,” employed by the police to aid them in profiling and questioning Manchester’s worst criminals. Fitz has an uncanny knack for drilling directly into the hearts and minds of his warped subjects.

Cracker was a critical and audience hit, earning 20 awards plus 14 other nominations, including six best actor statuettes for Coltrane, seven best drama series wins, three awards for writer Jimmy McGovern, and a best supporting actor for Robert Carlyle (in one of the most chilling performances my wife and I have ever seen). The first new Cracker in a decade was a UK ratings winner in 2006, pulling in 8.1 million viewers (in a country of 63 million).

Writer/Creator Jimmy McGovern, one of Britain’s greatest drama/mystery writers, earned a total of 16 awards and 16 other noms for Cracker and six other series. Two of his Cracker episodes won the Mystery Writers of America’s Edgar award. Writer-Producer Paul Abbott won 14 awards plus 17 noms for great works including Cracker, Shameless, State of Play, Touching Evil, The Girl in the Café, and four other series.

Coltrane and McGovern worked on bringing Fitz to life for months.”Though I am a car maniac,” Coltrane says, “we decided he wouldn’t drive, because we thought it would be quite funny if he would have to rush places and wait for the bus, like real people have to and not have all that macho screeching of tires and nonsense.”

Some of the plot lines in the cases took as their starting point real events, such as the 1989 Hillsborough disaster, in which police misjudgment resulted in 96 soccer fans being crushed to death and 766 others being injured.

Several different psychotic types with increasingly complex psychological motivations were explored during the run of the show. As the series entered the middle of the second season, the story lines became as much about the interactions of the regulars as they were about the crimes. To emphasize how fine a line the police (and Fitz) walk in their close interaction with criminals, all three series featured several stories in which the police themselves commit criminal acts or become victims of crime.

Because of the remarkable characters, highly intelligent and dramatic plots, and fine production values, Cracker is a series that crime/detective fans should definitely check out.