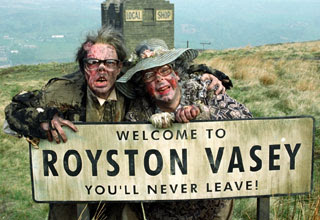 The League of Gentlemen is a mind-blowing British horror spoof.
Waldman’s film and TV
treasures you may have missed:

The League of Gentlemen is a bizarre, hilarious Brit TV spoof of horror films. It is one of the most original and unpredictable comedy series ever.

The League of Gentlemen (not to be confused with the critically hated comic book movie The League of Extraordinary Gentlemen) is a mind-blowing British spoof of the small-town horror genre. Three of its four writers play about two-thirds of all the 100 roles — male and female. They are Steve Pemberton, Reese Shearsmith and Mark Gatiss (who co-created, wrote for and co-starred as Mycroft Holmes in the recent dazzling Brit mystery series Sherlock).

League ran in the U.K. for three six-episode seasons — 1999, 2000, and 2002 — and a Christmas special. It developed a cult following in Britain and was nominated for 13 British awards (winning seven).

From the opening shot, I knew this was comedy from a different world. In Britain, hearses have glass windows on the side so you can see, alongside the coffin, something sweet written in flowers (such as “mum” or “beloved”). In this first shot you see a hearse moving through the small town of Royston Vasey, and written in flowers by the coffin is the word “bastard.”

The three stars are astonishingly good in their many characters, and they look and sound very different from each other — thanks to their talent and the show’s award-winning costumes and makeup.

Because it is so macabre and twisted, League is not to everyone’s taste, but it will be greatly enjoyed by fans of offbeat, highly original comedy.