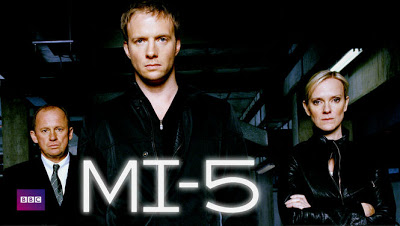 Enjoy 10 seasons of a great, well-made thriller ripped from the headlines.

For many Americans — me included — the finest recent British drama or crime series is MI-5, which deals with crises faced by the English intelligence agency which is the equivalent of the FBI (and which also has some of the responsibilities of the CIA). This brilliantly produced, acted, and written TV series is titled MI-5 in the U.S., Canada, and France; Spooks in the UK; Erikoisioukke in Finland and Tainiacy in Poland.

Due to its glossy high production values, outstanding scripts and rapidly paced spy intrigue and action-adventure story lines, it has been a critical and popular success for a decade. It has screened in 25 countries, including India, Serbia, Iceland, and Brazil.

Before its cancellation in 2011, it aired 86 exciting episodes over 10 seasons — all of which are available on Netflix, DVD, and Netflix Instant. Here is the first 60-minute episode.

It was interesting watching Firth and Agutter work together on TV, 26 years after seeing them perform nude on Broadway in Equus.

More than 94.7% of viewers gave MI-5 thumbs-up at imdb.com, and more than 40.2% rated it 10 out of 10. The series has a great contemporary feel, as it deals convincingly with today’s real security threats, including arms smuggling, terrorism, assassination attempts, race riots, drug trafficking, protecting a visiting U.S. president, hostage crises, Hindu nationalist plots to attack Muslims, bank robbery, and CIA-MI-5 tensions.

This smart, outstanding series is highly enjoyable on many levels, and I heartily recommend it to you.