Alice Embree : Making the War Personal at Under the Hood 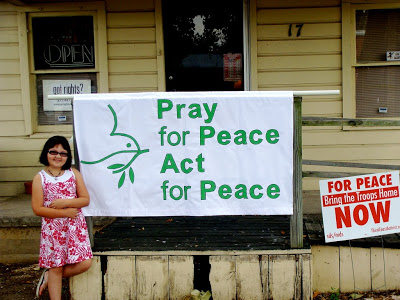 Under the Hood GI Coffeehouse, Killeen, Texas. Photo from Under the Hood photostream / Flickr.
We can’t give you anything…
Making the war personal

We can’t give you anything but war, buddy
That’s the only thing we’ll hire you for, buddy…

These lyrics, to the tune of “I can’t give you anything but love, baby,” were on my mind as several of us made a now familiar drive to Killeen, Texas, last weekend. The words were written by Vernell Pratt of the 70s-era Soeur Queens. They have a relevant ring in this recession.

Attend the ‘Hoodstock Flashback’ benefit for Under the Hood at Jovita’s in Austin, Sunday, November 14, 2010, 6-11 p.m. See details below.

I probably wouldn’t have known anyone in our current “volunteer” army if I hadn’t gotten involved with the coffeehouse Under the Hood in Killeen, Texas. Comparisons are often made to the Vietnam-era GI resistance, particularly because Under the Hood’s predecessor, the Oleo Strut, was well known in that resistance.

Yes, there was a Vietnam-era draft that made the war personal for a generation. You could avoid mucking through the jungles in the boot-steps of French colonialists if you were privileged. George W. Bush is certainly an example. But what was markedly different was the economic landscape. This recession has provided a perfect storm for military recruitment. Piled onto the jobless landscape, you have escalating college, health care, and housing costs.

The soldiers entering the military in the post-911 atmosphere do so for reasons of patriotism and pocketbook. They are lured by lies about Iraq’s relationship to the Twin Towers and never told about the previous U.S. relationship with jihadists in Afghanistan while the Russians were there. But the lure of steady pay, bonuses, and benefits is almost a no-brainer given the devastated job market.

Monthly paychecks, housing subsidies, recruitment bonuses, deployment bonuses, medical and dental care for soldiers and their dependents, post-discharge VA care, and assistance for education. It is no accident that soldiers refer to their “job” and their “contract” all the time. It is no accident that any soldier who resists a deployment is forced to make a careful calculus of the monetary cost. An “Other Than Honorable” discharge often means re-paying a bonus, losing healthcare, and losing access to college assistance.

The Baby Boomers who were in Austin remember college with $70 rents, tuition of $50 a semester, coffee for seven cents in the Chuck Wagon. Not so, in this environment where college graduation means the “commencement” of daunting loan payoff.

Meanwhile we veer through the current political landscape with blinders. Does anyone, besides Michael Moore, ever speak about the relationship of mounting deficits and endless war? Does anyone really believe that continuing tax cuts for the wealthy has a relationship to job creation? Haven’t the tax cuts been in place? How’s that been working out for job creation?

We are in one of the best run shill games ever. Stagnant wage growth, transfer of wealth to the wealthiest, a ransacked job market, global companies packing manufacturing jobs off to the lowest bidders on the planet. The “housing bubble” was a Wall Street con man’s paradise with average folks piling on debt and Wall Street trading derivatives of that debt until the house of cards fell down and they got bailed out with taxpayer dollars.

Meanwhile, back at Fort Hood in Killeen, suicides are continuing their record-breaking pace. Multiple deployments with no end in sight have taken their toll with outright casualties and walking casualties, with Traumatic Brain Injury (TBI) and Post Traumatic Stress Disorder (PTSD). We hear about it on Veteran’s Day and then almost everyone tunes it out.

Please don’t tune out an alternative this Sunday. Support Under the Hood’s mission to provide a free speech zone, a pro-soldier, anti-war presence a mile from the gates of the largest military base in the country, Fort Hood. Sunday, November 14th, 6-11, Jovita’s in Austin, $10 dollars. If you can’t attend, you can support Under the Hood through its website, here. 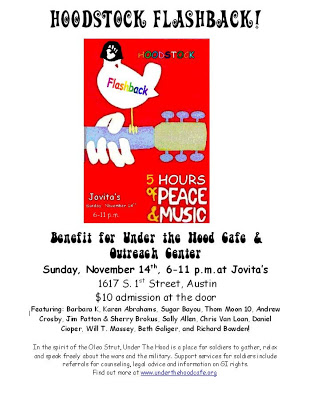 2 Responses to Alice Embree : Making the War Personal at Under the Hood