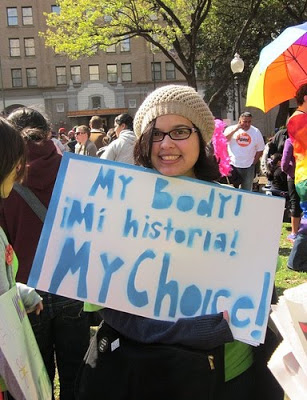 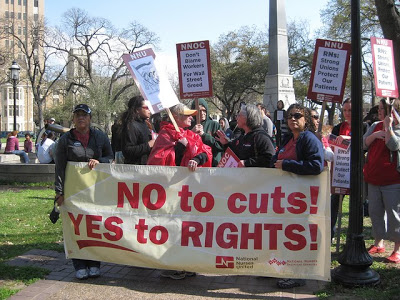 See gallery of photos below.

SAN ANTONIO — March 8th is International Women’s Day. CodePink and BookWoman are collaborating on an event in Austin to mark this day.

San Antonio observed International Women’s Day on Saturday, March 5, with its 21st annual celebration — a march of more than 1,000 that embraced issues of reproductive rights, attacks on transgendered people, local union struggles for nurses and hotel workers, and women’s demands for peace and justice. The spirited march through San Antonio culminated with poetry, music, and speeches. CodePink Austin participated for the second year.

I was unaware of International Women’s Day and its roots in U.S. labor struggles until 1970. As the women’s liberation movement was beginning to reshape my consciousness, I participated in a small celebration in the basement of an Austin campus-area church.

The March 8 events gathered scope and were observed throughout the 70s with activities that included women’s theater, skits, and workshops on global struggles for women’s rights from Asia to Iran to Austin. Workshops highlighted gay and lesbian rights and the dual oppression experienced by women of color.

It was a period in which women challenged countless barriers, including those to employment. Women filed lawsuits, or threatened them, to become Austin bus drivers, emergency medical technicians, firefighters, and cable splicers. Out of Austin came the historic legal challenge to abortion laws, Roe V. Wade. Women set up peer counseling services and demanded services for victims of rape and domestic abuse.

The idea of an international day for women was advanced by socialist parties in the United States and other countries and propelled by the historic struggles for women’s suffrage and workplace rights at the turn of the century. In 1911, more than one million people attended worldwide rallies demanding the women’s right to vote, hold public office, and organize on the job to end discrimination.

Less than a week after these rallies, the Triangle Shirtwaist Fire in New York City took the lives of more than 140 women garment workers. It was a horrific fire with a devastating loss of life because women had been locked into the building. 100,000 people participated in the funeral march for the women workers. PBS has recently aired a documentary on this event.

In 1912, in the textile mills of Lawrence, Massachusetts, 20,000 workers walked out of the mills protesting wage cuts. Most of them were women. The strikers had a committee of 56 representing 27 languages.

The strikers — mostly immigrant women — won significant concessions and a placard, “Bread and Roses,” inspired a poem by James Oppenheim that was later set to music by Caroline Kohlsaat. The song, “Bread and Roses,” captures the spirit of International Women’s Day.

In 1917, with two million Russian soldiers dead as the result of World War I, women chose the last Sunday in February to strike for “bread and peace.” Four days later, the Czar was forced to abdicate and the provisional Government granted women the right to vote. That historic Sunday fell on the 23rd of February on the Julian calendar then in use in Russia, but on March 8 on the Gregorian calendar in use elsewhere.

Fast forward to today. We can see the legacy of the second wave feminist victories from women’s leadership in countless progressive organizations to a woman president of the Texas AFL-CIO. But we are witnessing historic backlash with assaults on reproductive choice and funding for programs as important as domestic and international family planning.

At the University of Texas, the Center for Women’s and Gender Studies was singled out for severe cuts. In Wisconsin, we not only see an assault on workers’ rights, but on teachers — a field in which women workers are the majority. It is my hope that this International Women’s Day will mark the beginning of an era in which progressive fights converge as effectively as Austin’s pro-choice rally merged with the Wisconsin workers support rally on Saturday, February 26.

[Alice Embree is a long-time Austin activist, organizer, and member of the Texas State Employees Union. A former staff member of The Rag in Austin and RAT in New York, and a veteran of SDS and the women’s liberation movement, she is now active with CodePink Austin and Under the Hood Café. Embree is a contributing editor to The Rag Blog and is treasurer of the New Journalism Project.] 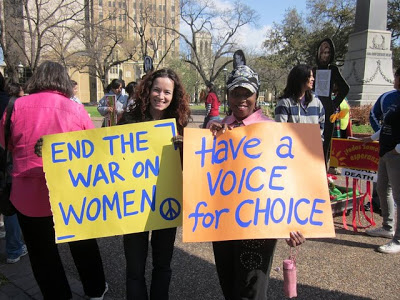 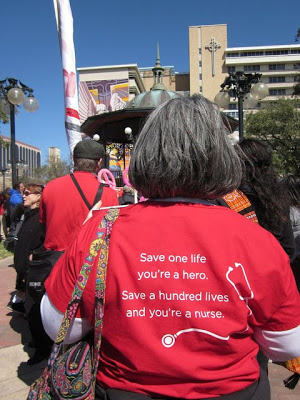 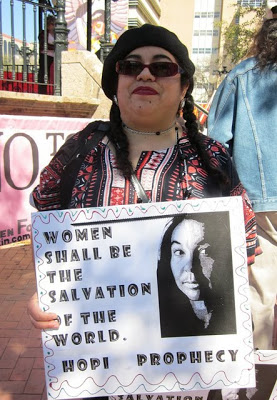 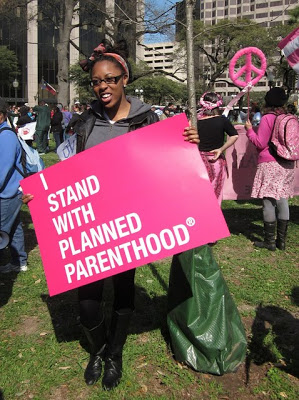 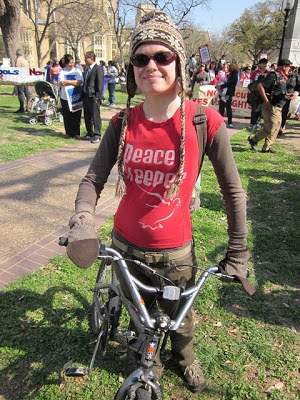 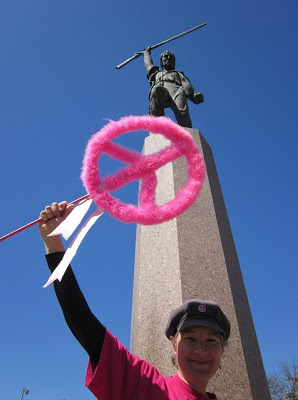 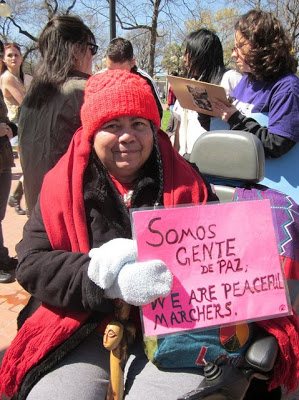 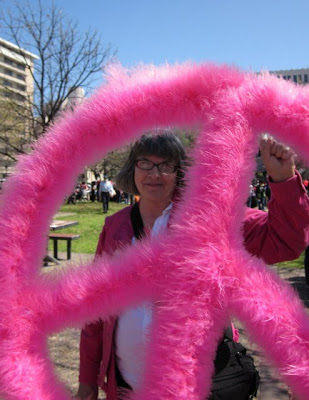 Peeking through the pink peace symbol above is The Rag Blog‘s Alice Embree. 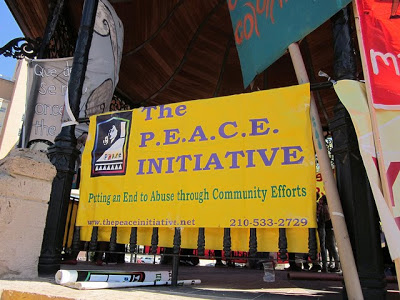 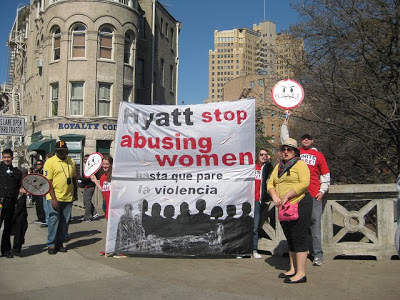 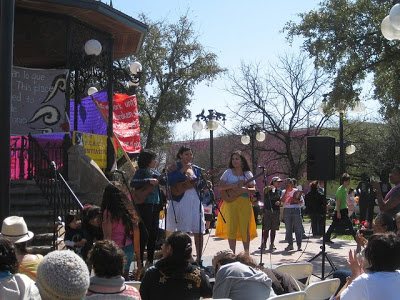 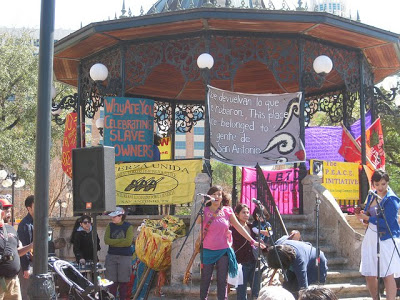 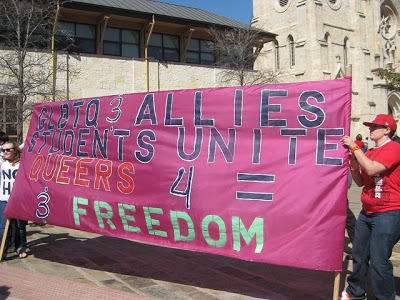 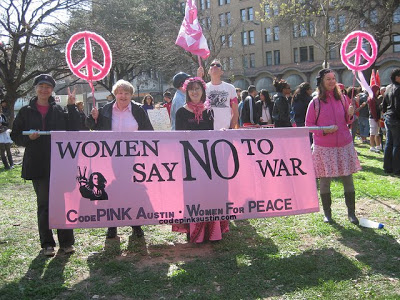