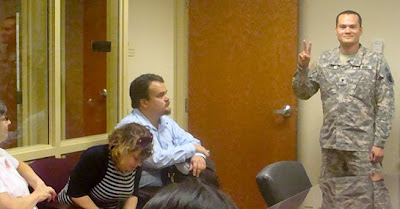 In an unscripted emotional moment after the sentence was read, Victor Agosto ripped his rank off his uniform and put it in front of the Captain.

See ‘The truth is on our side,’ by Victor Agosto, Below.

Victor saluted her and said, “Specialist Agosto reporting as ordered.”

A summary court martial is a scripted affair in which the presiding officer serves as judge, prosecutor and defense attorney. At this hearing Victor Agosto’s charge was his refusal to obey orders to deploy to Afghanistan and the tiny room was packed with civilian supporters. An Associated Press reporter would soon give the story a national audience.

Specialist Victor Agosto has been stationed with the 57th Expeditionary Signal Battalion, 69th Air Defense Artillery, Rear Detachment. He had served a thirteen-month deployment in Iraq. On the day of his court martial he had been in the Army four years and one day. His contract would have been up at the end of June, but the unpopular stop/loss clause was invoked, his termination date revised and he was told he would be deployed to Afghanistan.

Rather than going AWOL or trying to escape punishment, Agosto informed his command in April that he would not be deployed to Afghanistan. He reported for work, but refused all orders that directly supported the war that he found immoral and unjust.

In the court martial hearing on Wednesday, August 5, 2009, Cynthia Thomas testified to Victor Agosto’s character. She told those present that as an Army wife for seventeen years, she had met many soldiers, from privates to officers. “And in all that time I have not met a soldier with more integrity than Spc. Victor Agosto… He’s not impulsive or rash… he carefully considers the consequences of his actions… I have seen him struggle with the question that plagues many of our soldiers and family members. Whether the wars in Iraq and Afghanistan are just.”

Cynthia told the court that Victor Agosto “made the very hard decision to follow his conscience knowing that his peers and his command would ostracize him. That he would lose all the benefits he has earned after fulfilling his 4-year contract, and after serving thirteen months in the Iraq war… Victor feels so strongly in following his conscience that he is willing to give up his freedom. The very freedom that our country asks our soldiers to fight for…”

After Cynthia’s testimony, the hearing was moved to a larger hearing room in order to accommodate more supporters who had not been able to get in. Victor Agosto was allowed to present testimony at that time. He spoke of his good conduct medal, of the fact that he didn’t break rules other than those he could not follow in good conscience. He testified that he did not pursue a Conscientious Objector discharge because he believed that some wars were necessary. Agosto said that he believed that the war in Afghanistan was illegal under international law — that the United Nations Charter prevents countries from engaging in wars unless they are in self-defense or authorized by a United Nations Security Council resolution.

After a short adjournment, Captain Santos read Agosto’s sentence — loss of rank, loss of half a month’s pay, and thirty days confinement. He is then likely to receive an Other Than Honorable discharge that will cost him additional GI benefits.

In an unscripted emotional moment after the sentence was read, Victor Agosto ripped his rank off his uniform and put it in front of the Captain. Later, his attorney said, he received a guard’s help in removing the rank sewn on to his hat.

Supporters waited for about forty minutes for Victor Agosto to be brought downstairs. Guards escorted him to a white van. He was undaunted, unshackled and without handcuffs, flashing a peace sign as supporters did the same and raised fists. Despite a guard’s repeated warnings of “no pictures,” cameras clicked and film rolled.

Victor Agosto’s civilian attorney, James Branum, returned reporters’ phone calls all afternoon. He had acted as an occasional advisor, but did not represent his client. Under the strange rules of military
code, if Branum had represented Agosto, a guilty verdict would remain permanently on Agosto’s criminal record.

At 7:00, under a still unforgiving Texas sun, about sixty supporters gathered at the East Gate of Fort Hood. Active duty soldiers in Iraq Veterans Against the War were joined by people from Killeen, Belton, Austin, and as far away as Fort Worth. Protestors stood across from the sprawling military base — the country’s largest base — holding signs of support for Victor and chanting. Drivers passing by flashed peace signs, held thumbs up and honked, proving that there is more of a bond than most would suspect between the peace movement and the soldiers and military families ground down by multiple deployments in seemingly unending wars.

James Branum read a statement from Victor Agosto. “I have learned that nothing is more frightening to power than a direct and principled challenge to its authority. The truth is on our side and those who have incarcerated me know it.” 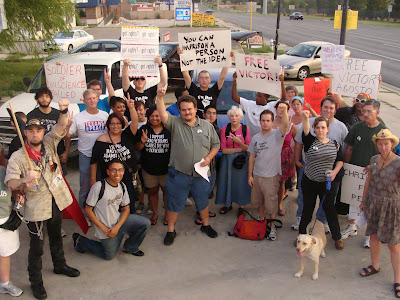 The truth is on our side

[The following statement was read at the protest after Thursday’s court martial by James Branum, Victor Agosto’s civilian attorney.]

I have learned that nothing is more frightening to power than a direct and principled challenge to its authority. The truth is on our side and those who have incarcerated me know it. This is something that no amount of pro-war propaganda can change.

My only regret is that I did not begin refusing orders sooner. My only apologies are to the people of Iraq and Afghanistan. I hope that someday they can forgive me for my contributions to their distress. Thank you for coming here to protest my incarceration. I am humbled by your demands for even greater concessions by the United States Army. I am completely content to spend a month in jail for the sake of my conscience. But it seems that reducing my sentence from a year in jail to thirty days in jail is just not enough for you people. This dedication to justice is something that draws me to people in the peace movement.

I look forward to continuing to work with you, the Texas peace community, to bring about the end of these horrendous occupations in Afghanistan and Iraq. I thank you for making me feel that I can comfortably call Texas my home, something that seemed unimaginable three and a half years ago when I first arrived at Fort Hood. You have treated me with a compassion and kindness that I do not deserve. Your dedication to the cause inspires me to continue struggling for world peace.

11 Responses to Alice Embree : The Court Martial of Victor Agosto