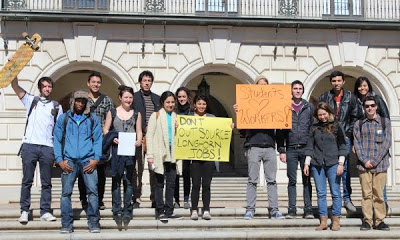 AUSTIN, Texas — On January 29, 2013, University of Texas at Austin President Bill Powers convened the UT-Austin community to make recommendations about increasing our efficiency that would include job privatization for university staff.

President Powers’ speech led to despair, anger, and confusion across our campus. Despair and anger came from threatened loss of health care, state pensions, jobs, and community; confusion from the contradiction posed by the projected image of Powers as our defender against the likes of Governor Rick Perry and the University of Texas Board of Regents.

Powers is presented as an administrator who wants both affordability and high quality in a February 2, 2013, Associated Press article, “Texas Fight Highlights Higher Ed Culture Clash.” The article — which says that, “If colleges were automobiles, the University of Texas at Austin would be a Cadillac: a famous brand, a powerful engine of research and teaching” — defines Texas as ground zero in a culture war to preserve educational quality and research, but degenerates towards the end when it quotes Peter Flawn, our emeritus president:

“Universities are by their very nature elite,” he said. “Their job is to separate the sheep from the goats and the goat-sheep from the sheep-goats, and try to produce people who are knowledgeable and can reason, think and solve problems.”

And that, it seems, is the intellectual quality of this particular thread of discussion. I would not characterize my students as sheep, goats, sheep-goats, goat-sheep, nor would I consider the role of a university to be a sorter of the forenamed critters. It is not true that the enemy of our enemy is our friend. I think it’s critical that we look hard at what President Powers said.

The United Nations Declaration of Human Rights, which lays the groundwork for “an existence worthy of human dignity,” states in Article 23:

The plan is based on a report from the Committee on Business Productivity which convened for the first time in April 2012. Committee Chair Steve Rohleder is part of the executive leadership of Accenture, a global outsourcing company that cost the state of Texas more than $800 million in a failed effort to privatize food stamp and TANF eligibility. Other members of the committee are tied to equity firms TPG, Capital Royalty, HM Capital, Falconhead Capital, and Bull Ventures; and to Boeing, StarTex, Dell, and Susser.

President Powers says that the only way that UT-Austin can become “the very best public university in America” is to operate like a business through outsourcing and privatization of services; market costs to students for meal plans, housing, and parking; job reductions through consolidation of human resources, technology, and financial processing; and commercialization of intellectual property. He calls this a moral imperative.

President Powers states, “We’ve been outsourcing all along: we don’t have a fleet of airplanes used by faculty to get to meetings; we use Southwest Airlines.”

UT probably should not own a fleet of airplanes and pay the pilots with public funds. But the relationship of pilots to our university is quite different from that of workers who serve food, clean buildings, support our offices and technical facilities, and generally keep the university running.

These workers (who include many students) will lose and lose big — guaranteed pay levels and advancement possibilities, state pensions and benefits, safety and environmental standards, rules against discrimination in employment, and the right to join a union.

I also question the assumption that cost-saving experiments endorsed by finance capital are best for the citizens of Texas. Accenture’s failed contract needlessly increased the suffering of thousands of poor and working class Texans and their children. The attempt to take over management of the Kerrville State Hospital last year by Geo Group, the private prison corporation, was resolved when State Health Commissioner David Lakey stated that reductions in staffing would put both the patients and the State of Texas at risk.

The notion that a business model is the only way for human endeavors to succeed seems strange at best. Cost cutting business practices have contributed to economic inequality, disregard of safety and environmental standards, and discrimination in employment. It’s why we need laws, government regulation, and labor unions where workers can have a collective voice.

It’s often more — not less — expensive when neoliberals turn not-for-profit into profit-making ventures. The savings that come from lower pay, lower health care costs, and erosion of pensions for workers will most likely benefit the company more than our university. That’s part of the margin of profit. The other part is increased cost for services.

President Powers boasts that “over the past five years, some 4,000 people left the payroll voluntarily. That’s 20 percent of UT’s core staff workforce.” Those jobs and positions have not been replaced. The thought of an additional 20 percent cutback is feared not only by workers who may not leave voluntarily but also by their co-workers who have added workloads and sometimes have impossible jobs.

Go to any office in our university at 7 p.m. and you will find workers who have been there since 8 a.m.. The work of support staff is necessary for the university to function properly. It’s wrong to balance a budget on job loss and inadequate staffing.

Finally, in an unfortunate example, President Powers compares the effort, which will be led by Chief Financial Officer Kevin Hegarty, to the Pope moving an obelisk in 1586. As a union woman who respects the dignity of work both intellectual and manual, I ask who exactly carried that 344-ton obelisk and under whose organizational authority.

We’re sure that Mr. Hegarty would agree that he has none of the moral authority of a pope. Our university is not a 344-ton obelisk. We who devote our intellect, energy, and care to UT should have a voice in these decisions that so deeply impact our lives, our families, and our community.

I would suggest another approach. President Powers should go to the Texas legislature and demand that Texas pay its share with the same force he used to promote Austin taxpayer funding of a new medical school.

The Legislature shall establish, organize and provide for the maintenance, support and direction of a university of the first class, styled “The University of Texas.”

Thirty years ago, Texas funded more than half of the budget of UT-Austin. It’s now down to 13%. President Powers should join us at the Capitol on April 10 for a march and rally in defense of the public good and public workers.

Will Rogers once said, “When you’re in a hole, stop digging.”

[Anne Lewis, a senior lecturer at the University of Texas and a member of TSEU-CWA Local 6186 and NABET-CWA, is an independent filmmaker associated with Appalshop. She is co-director of Anne Braden: Southern Patriot, associate director of Harlan County, U.S.A, and the producer/director of Fast Food Women, To Save the Land and People, Morristown: in the air and sun, and a number of other social issue and cultural documentaries. Her website is annelewis.org.]