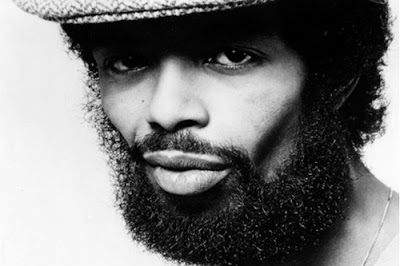 Gil Scott-Heron (1949-2011) died on Friday, and that is a sad, sad sentence to write. If you are familiar with his music, then you know what I’m talking about; and if you’re not, you can begin to remedy that by following the links in this essay. (Listen to the beautiful “Rivers of My Fathers” from 1974′s Winter in America to start your journey.”)

I’m listening right now, as I write, to the half-dozen of his songs that stick the hardest to my memory, and there is a certain irony in the word that comes to me when I hear them: Scott-Heron’s music is elegiac.

A mournful spirit permeates his work, whether a particular piece of music is bitingly funny, angry, cautionary, yearning, or — as so much of his music was — cinematic in its expressive storytelling and narrative sweep. What was Scott-Heron mourning all his life? So many answers rise to their feet, waving their hands to be noticed: racism, injustice, the glut of wasted lives in a society that has forgotten what is really of value…

But really, I think it was the chasm that divides what is from what could be, because Gil Scott-Heron was one of those artists who could see both so clearly, heart breaking the whole time, and make something beautiful out of the heartbreak.

Scott-Heron’s intellect and insight shone like beacons, beginning with his first recordings. His life story suggests that his promise was seen early on: a teacher at DeWitt Clinton High School in the Bronx used Scott-Heron’s writing to help obtain a full scholarship to The Ethical Culture Fieldston School, a politically and educationally progressive institution founded in 1878 — where Scott-Heron was nevertheless one of five African American students out of 100 in his class.

Tons of high achievers in the arts and academia attended Fieldston, from photographer Diane Arbus to Sixties activist Staughton Lynd to poet Muriel Rukeyser, composer Stephen Sondheim, and Hollywood mogul Jeffrey Katzenberg. He was a prodigy: by his early twenties, Scott-Heron had already published several books and made several albums.

His breakthrough recording was “The Revolution Will Not Be Televised” in 1970 (he was 19 when he wrote it), less a song and more of what would later be called a rap, a satiric spoken-word monologue excoriating the media culture that had already taken hold of so much public space in this country:

Scott-Heron’s 1974 album Winter in America, co-created like much of his earlier work with Brian Jackson, sees this nation’s demise inscribed in its origins, as the title song describes:

In “The Bottle,” from the same album, carried along on an equally lyrical and lovely tune, the artist speaks directly of the plague of addiction that shaped much of his life and the lives of so many others.

The 1977 recording included “We Almost Lost Detroit,” Bridges about an early nuclear power accident, and was revived as part of the 1979 No Nukes Concert album.

Through the Reagan years and beyond, Scott-Heron kept recording (often other writers’ songs), but the bulk of albums released during the 90s were anthologies and collections of prior recordings. He spiraled into addiction, was jailed twice in his fifties for cocaine possession, and according to profiles in The New Yorker and other publications, he was still smoking crack, half out of his mind with drug-induced paranoia, in recent months. Photographs from the last decade show a skeletal figure, and we know from published accounts that he’d lost his teeth, his composure, and his health to addiction.

I never really thought of myself as a complex man,
Or as someone who was really that hard to understand.
But it would hardly take a genius to realize
That I’ve always been a lot too arrogant and a little too fuckin’ wise
That was a combination that made folks feel duty bound,
To do whatever they could to try and shoot me down.

This is where the temptation rises to say something facile about the cruelty of the world and the toll it takes on those whose hearts and eyes are open and who hold their heads high.

It’s not that it wouldn’t be true, but it wouldn’t be the only truth, or even the one most worth repeating. The confounding thing about human beings is that — given talent, heart, eyes to see both the beauty and suffering of the world, even those given circumstances that may differ very little, each from the other — some people prosper and some succumb.

Along with the many mysteries of human resilience that station each of us in an appointed place on the spectrum of joy and pain, endurance and embrace, we have this: the artists whose great gifts for beauty and meaning add immeasurably to the texture of life, to our ability to feel it, and whose gifts cannot save them from self-destruction.

So I will just offer thanks for Gil Scott-Heron’s life and work, for his unparalleled ability to braid lovely and sinuous music with knife-sharp lyrics, for his legacy, and for the perseverance that kept him creating, against the odds, for 62 years.

Here is Scott-Heron’s truly harrowing version of Robert Johnson’s song (written in the mid-1930s), “Me and The Devil,” from the album he released last year, I’m Still Here.

[Arlene Goldbard, a writer, speaker, and social activist, is chair of the board of The Shalom Center. Her website is ArleneGoldbarb.com.]

Thanks to Rabbi Arthur Waskow / The Rag Blog