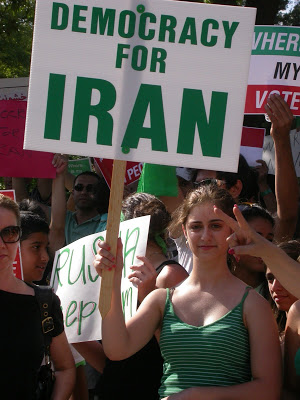 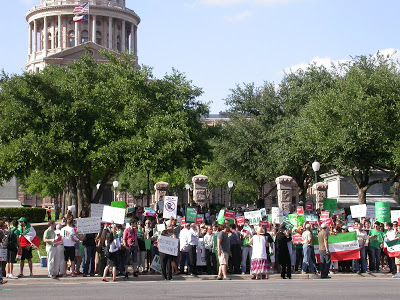 Iranians and their supporters demonstrated at the Texas State Capitol Wednesday, June 17, 2009. Photos by James Retherford / The Rag Blog.
Dude. Where’s my Vote?

A rally and march condemning alleged election fraud in Iran took place in downtown Austin yesterday, Wednesday, June 17, 2009, starting at 5 p.m. Some 350 people, a majority of them Iranians and many either students or faculty at the University of Texas at Austin, gathered in front of the Texas State Capitol.

Backed by live music fueled by two energetic drummers, they chanted, listened to speakers and poetry, and waved signs directed at passing rush hour traffic. Many in cars honked their support and flashed peace signs. The demonstrators’ placards called for “Democracy for Iran” and asked “Where is my Vote?” Non-Iranian supporters showed signs expressing their “Solidarity with Iran.”

Then the two-block long group marched down Congress Ave. to Sixth Street and back, chanting “What do we want? Democracy!” and “Ahmadinejad. Shame on You,” One distinguished grey-haired gentleman in tie, jacket slung over his arm, stepped proudly while holding up a sign that asked, “Dude. Where’s my Vote?”

The demonstration was organized by UT student group Iranians for Peace and Justice, and by the Persian Student Society of UT and Austin Permanent Peace Protest.

Also see Were Elections a Fraud? Uprising in Iran; Protest in Austin by Banafsheh Madaninejad / The Rag Blog / June 16, 2009 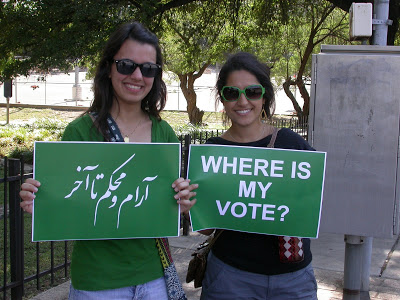 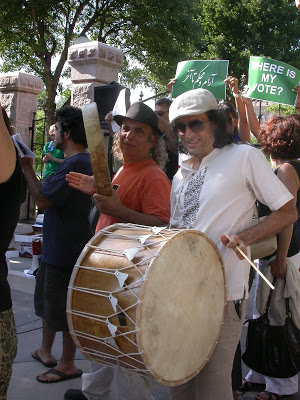 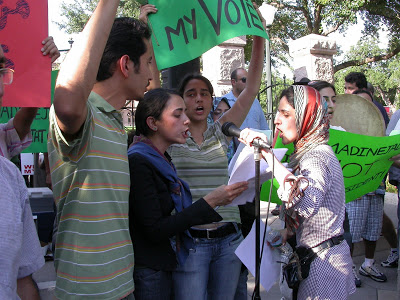 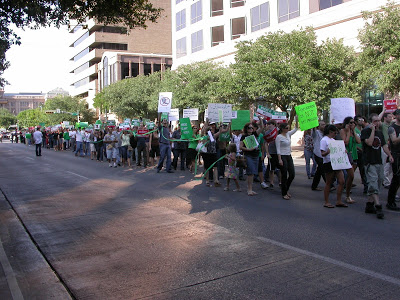 This entry was posted in Rag Bloggers and tagged Austin, Iranian Elections, Political Protest, University of Texas. Bookmark the permalink.