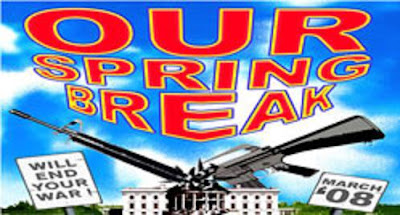 This is a report from Austin’s Nora Hansel, a student at Wesleyan University who was arrested during direct action demonstrations at the Capitol building in Washington, D.C. on March 19, 2008. Nora is the daughter of Lori Jo Hansel,Austin attorney, MDS/Austin activist and former staffer at the underground newspaper, The Rag. The Rag Blog ran a story titled “Austin teen joins Iraq war protests in Washington” on the day of the demonstration. The post included a video of the activity in which she was involved. — The Rag Blog

Over spring break, I traveled to Washington, D.C., to join the protests against the War in Iraq scheduled for March 19 at the Capitol. I worked with Our Spring Break, a group created by students Ashley Casale of Wesleyan and Robby Diesu of D.C.’s Catholic University. Our protest was called a “Stop-loss” action.

A “Stop-loss Order” is an order that involuntarily and illegally extends the soldiers’ service beyond the terms of their contracts. Soldiers have been “Stop-lossed” as many as five times during this war. These extensions have serious effects on the soldiers and their families and have resulted in a sky-rocketing rate of military divorce.

So, as a way of marking the fifth anniversary of the occupation of Iraq, we decided that the members of Congress — who were about to go into a long Easter break — needed to be “Stop- lossed.” We ordered the members of Congress to remain at their posts until all soldiers and military contractors have been removed from Iraq and Afghanistan. Our action was designed to block them from leaving their posts.
.
Code Pink created a diversion for the police while one group of students blocked the intersection of First and Independence, an intersection that representatives must travel through to get home. Meanwhile the other group of students (my group) blockaded the exit driveway to the senators’ parking garage.

We used banners, enlarged “Stop-loss order” posters, coffins and human knots for the blockade. While over a hundred participated in the overall action, about 30 of us were arrested, mostly students (for some of us, what may be the first of many arrests).

They arrested our group first, but we still managed to disrupt traffic. The others, who were at the intersection, blocked traffic for an hour.

I thought the action went very well though I was concerned by the lack of media coverage. We did create a lot of mayhem for those present, but, to put it in perspective, it was a very small action. A symbolic action. But I think it’s always important to make some noise, to call attention to the atrocities happening far away.

As Molly Ivins would have said, to “raise hell.”

I hope that, with the recent Winter Soldier Testimonies and the nonviolent direct actions and other protests surrounding the fifth anniversary of the Iraq War, that we raised a little hell. And that the anti-war movement is finally gaining some momentum.

For previous article on The Rag Blog, go here.