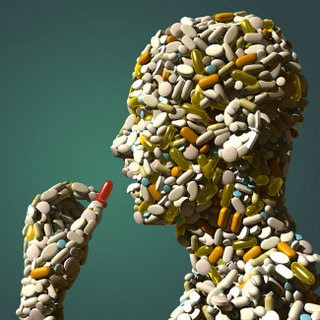 ‘In no other civilized nation, would you, as a sufferer from an illness, have the opportunity to subsidize one of the three most profitable industries in the world.’
By Dr. S.R. Keister / The Rag Blog / October 17, 2008

A special salute to those of you who have the privilege of going to the drug store to have your prescription(s) filled before the election. You are the select, the chosen, who as American citizens have been granted the right to pay the highest prices in the world for your prescription medicines. In no other civilized nation, would you, as a sufferer from an illness, have the opportunity to subsidize one of the three most profitable industries in the world, contribute to the excessive CEO salaries, pay in part the salaries of the hundreds of lobbyists in Washington as they pay baksheesh to many, many congressmen, by-in-large Republican, who work so hard for the pharmaceutical industry.

We as Americans are indeed the select who, by our purchase of pharmaceuticals, pay for the never ending stream of TV commercials, magazine ads, and newspaper ads for medications about which your physician should be familiar without the vulgar publicity. In spite of the propaganda from the pharmaceutical industry regarding “research costs” the industry spends much more on advertising and lobbying than on “research” I would call your attention to the book: The Truth About The Drug Companies by Marcia Angel, M.D.; Random House, Published 2004.

It should be noted that the United States and New Zealand are the only nations in the world that permit TV advertising for prescription medications. In no other nation does one have to sit with an eight-year old grandchild watching a sporting event and parry his questions during Viagra or Cialis ads about what an erection is, or what is better sex? Where are the hypocrites that cry out about sex education in school when there are ongoing ads on TV that tell one to see their doctor if “the erection” lasts more than four hours? I have heard nothing from these God fearing folks about sex education on TV! Remember what Dante wrote about the fate of the hypocrite?

In no other Western nation, nor in the V.A. facilities in the United States, are the ill taken advantage of as we see in the USA. In the European nations, in Canada, Australia, Japan, there is, under their national health plans, regulation of pharmaceutical prices, prohibiting excessive profits to the manufacturers. In the United States we have no price controls. Indeed the Republican Party, President Bush, and Senator McCain have bitterly opposed any price controls, and in fact have encouraged just the opposite in passing “Medicare Part D” several years ago, thus, scamming the elderly even more to the benefit of the pharmaceutical and insurance industries. The monstrous “plan,” passed by the House of Representatives in the middle of the night, awarded billions of Medicare dollars to the pharmaceutical and insurance industries for their “participation,” and further provided for the insurance companies as carriers of the individual policies, resulting in a charge to the participating patient of somewhere around $30 per month for the privilege of “belonging.” This could have been managed by the present Medicare agency, with upgrading, and modification, without involving the insurance industry; however, the Bush/McCain/Republican beholding to the pharmaceutical and insurance industry trumped the interest of the citizen.

It should be noted that many of the Republican leaders in congress responsible for the Medicare Part D bill subsequently ended up working for various pharmaceutical companies or lobbying firms. And, these same folks who pushed the Medicare D Legislation forbid price negotiations by Medicare for price control, and also forbid getting medications from abroad at a more reasonable price. The “reason” for the latter was the administration’s concern that drugs from abroad might be dangerous or inferior. Of course this was pure poppy-cock; of the six or eight major pharmaceutical firms, several are multinationals with offices not only on the United States, but in Switzerland, France, Germany or Sweden. The products they sell in the United States could be made anywhere in the world. Recall several years ago the British subsidiary of one drug company found its flu vaccine supply contaminated and the U.S. government obtained the vaccine from a French subsidiary in the United States. At the same time there was a great concern about bird flu and the government stockpiled TamiFlu made in Switzerland. Happily, in many instances we are able to obtain medications from abroad. For instance, my medication for prostatic cancer costs $400 for 30 tablets in the United States. I can obtain it from Canada at 100 Tablets for $400.

A word about generic drugs. Under U.S. patent laws a drug company looses exclusive patent rights to a specific drug after 17 years, and then theoretically a generic manufacturer can produce the same medication under its chemical name, rather than the original vendor’s trade name. Generics are just as good, and just as safe, as the drug under the original brand name when given Food and Drug Administration approval. Yet the big drug companies can delay that change for some years by various spurious legal actions, thus maintaining the higher prices the consumer must pay. Another ploy is to permit the original drug to become generic, but change the chemical formula a bit and market a “new and better” version of the old drug. As a result of the companies’ huge advertising budgets, the lay public will buy into this nonsense. If you are wise stay with the original in generic form if it is doing the job.

I note that Sen. Obama favors changes in the present consumer punitive system, while his sloganeering opponent, with ruffles and flourishes, suggests he’d bring more of the same. Please note that currently under Medicare Part D, the insurance carriers in many instances are increasing monthly membership rates, increasing co-payments, and decreasing the choice of medications available, while the pharmaceutical manufacturers are increasing prices. A word of caution: your local pharmacist is not responsible for the high price of drugs. He is trapped in the same situation as your local gas station owner. Do not blame the messenger.

This becomes a more and more vital issue in today’s economic meltdown. I sincerely fear that relief may be some time away regardless of who wins the election since problems beyond belief will face the next president. I sincerely believe that Sen. Obama will diligently try to correct a situation that he had no hand in creating, a situation that goes back to the Reagan administration and the concept of “trickle down” economics for which Sen. McCain has been a great supporter, regardless of his politically motivated attempts to publically disengage from what he has helped to create. I note that the U.S. Treasury Department managed to provide the figures for the increase in next year’s social security payments before the November election. A good increase, a necessary increase, but an increase that seems a bit disingenuous in view of the impending decreased taxes available to the U.S. Treasury with the increasing unemployment.

For those with further interest in the machinations of the pharmaceutical industry I suggest the following reading; Critical Condition, Bartlett & Steele, Doubleday, Published 2004 and Health Care Meltdown, Bob Lebow M.D., J.R.I. Press, Boise ID 83703, Published 2002, or indeed my own personal ranting here. Click on position papers.

[Dr Keister is a retired physician who contributes regularly to The Rag Blog.]

2 Responses to Big Pharma and Your Pocketbook : Big Hurt