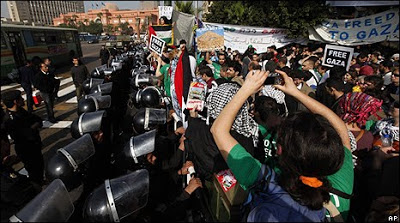 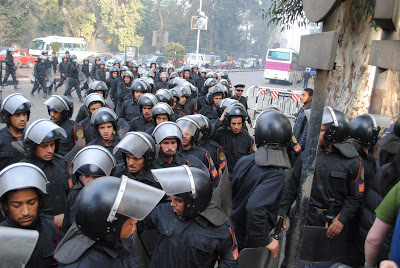 CAIRO — In Cairo yesterday, a spirited, highly visible and noisy demonstration held sway at a central traffic point — the Nile Corniche — across from the Egyptian Museum for seven hours, affixing huge banners in Arabic and English to trees and fences. In Gaza, a peace march took place including the 80 GFM participants who were able to enter the blockaded and occupied part of Palestine.

More than 500 people converged in small groups at the museum at 10 a.m. to press for freedom for Gaza and Palestine. Police blockaded the small hotels where marchers were staying, preventing dozens of people from leaving for several hours, and harshly attempted to contain the demonstration.

As the groups came together in the street, numerous marchers were clubbed to the ground, kicked and thrown into the center of Tahrir Square where police barricades and circles of Egyptian security quickly closed in. Those covering the action, observers, and members of the legal team, were seized by security police and pushed into the square.

Medical team personnel treated gashes, lacerations, broken noses, and bruised ribs. As has been true all week, Egyptian citizens who joined in or manifested support were treated most severely or were taken away.

The day before, the French GFM delegation had gone to the pyramids; someone faked an illness and while security forces moved in to respond, they unfurled a giant Palestinian flag across the pyramid. From that photo, they made an enormous color streamer, stamped with GAZA, now rippling in the square. The endless stream of Cairo traffic (23 million people living in this city), buses, taxis, cars and crowds, heard and saw the protest.

At 11:30 pm, under a full moon, we participated in a candlelight vigil in Tahrir Square where we danced and sang in the New Year.

Five days of rallies, actions, frustration and setback: the GFM wanted to enter Gaza 1,400 strong to express solidarity with civil society, witness their struggle for survival and self-determination, and join in a massive peace march. Instead, we found ourselves in Cairo for the week, a determined group from 42 countries trying mightily to realize our original goal in different circumstances.

In the end, we found unity among differences, common ground, and new alliances. There was a gallant effort to make a way out of no way, to keep focused on Gaza and the needs and desires of the Palestinian people, and to press forward to a more robust international peace and justice movement. If there was a silver lining here, perhaps this was it.

CAIRO — Egyptian security forces were attacking protesters in Tahrir Square, at the core of downtown Cairo, after they sat down in the middle of a busy Cairo street, protesting the imprisonment of the people of Gaza. Others were literally barricaded inside their hotel, the entrance surrounded by steel riot barriers. Egyptian security forces refuse to allow them to leave. Green personnel carriers line the streets. It is pandemonium.

The protesters are part of the Gaza Freedom March, a group of 1,400 delegates from 42 countries, including France, the United States, the Philippines, Italy, Germany, Sweden, Brazil, Australia and Japan. They converged on Cairo intending to march with Gazan civil society in a massive show of nonviolent resistance against the blockade, which 16 international NGO’s and charities condemned in a report released December 22 as “preventing reconstruction and recovery” in the Gaza Strip and which the United Nations Development Program has criticized as contributing to Gaza’s “de-development.”

But Egypt refused them entry into Gaza, just days before most of the marchers were to arrive in Cairo. Since then, the marchers have convoked a series of vigils, demonstrations and marches, accompanied by song, chants and bright banners. The Egyptian state has responded with repression, putting groups of riot police around marchers, harassing hunger strikers, canceling permits, detaining marchers and threatening them with water cannons, arrest and deportation.

Two days ago, Egypt attempted to placate the marchers by offering the organizers permission for a token 100 marchers to enter Gaza. Initially, a segment of the steering committee accepted the offer.

But after many of the core delegations refused to submit to tokenism, including the French EuroPalestine group, which has spent nearly a week sleeping in tents in front of their embassy, and the South African contingent, with leadership strengthened in the crucible of the anti-apartheid struggle, a fuller, more representative segment of the steering committee rejected the offer in deliberations that lasted until dawn, and attempted to prevent the buses from leaving.

Two young Palestinian-American sisters, Dana and Lara Elbrno, their father from Gaza, were among those who refused to go. They said they could not accept the offer and were unwilling to accept the terms the Egyptian government had imposed: the buses allowed into Gaza under the auspices of CodePink and not the Gaza Freedom March, their purpose framed explicitly as a humanitarian convoy and not a political symbol — ultimately, they said, the conversion of a political statement against the siege into charity.

Others, selected among the 100, refused the offer too. Palestinian author Ali Abunimah and Filipino politician and writer Walden Bello of the Akbayan Party disembarked when they heard that the Gaza Freedom March’s core partners in Palestinian civil society, including Haidar Eid, a literature professor at Al-Aqsa University and Omar Barghouthi, the founder of the Boycott, Divestment, and Sanctions campaign, also spurned the offer, claiming it was divisive, and so, “we deeply feel, terrible for the solidarity movement.”

Or surrounded. A huge group of internationals attempted to march in the direction of Gaza from Tahrir Square. The marchers, hundreds of them, came to the streets from cafes, hookah bars, the KFCs and Hardees that sit on the sidewalks surrounding the square, swarming in from points all around, stopping traffic on the circular ring road around the center of the square. Then they collided with Egyptian riot police.

They sat down, blocking several lanes of traffic for 45 minutes. Retaliation was violent. The plainclothes police picked the protesters up, one by one, pulling them by the hair, roughly throwing them around, until they had them cloistered on a corner, and then closed the museum and the metro. They broke cameras and video cards, and left one delegate with several fractured ribs.

Several were hit, some left bloodied and bruised. One, Suleika Jaouad, a student at Princeton University, was punched in the face. As she says, “I was witness to bloody, indiscriminate violence.” She was on the periphery of the protest and says she was “assaulted just for being there and attempting to film the police brutality – evidence that they clearly did not want to be documented.”

Things got much quieter when the protesters were no longer blocking traffic. They quickly set up an encampment. Conscripted riot police, in visored black helmets, stood around them, blocking sight of anything except for the multi-colored banner hanging from the tree around which they were clustered. Gael Murphy, one of the organizers of the march, says that the protesters “renamed Tahrir Square Free Gaza Square” and sang songs, played the accordion and waved banners reading “those who stand up for human rights will never be wrong.”

There were many chants of “Free Gaza.” Marchers were jumping up and down, practically screaming. One attendee, Max Geller of Brookline, Massachusetts, said, “It’s at a fever pitch, it looks like a rock concert.” The excitement level was alpine. Bill Ayers added, “We shine a light on a dark spot in Gaza,” in the process offering “solidarity with the people of Gaza, letting them know that they’re not alone.”

While the protesters were alternately sitting down and being slammed around in Tahrir Square, others were trapped inside their hotels. Egyptian security forces had preemptively barricaded many of them, in a desperate bid to prevent them from joining today’s protests.

One march participant, Desiree Fairoz, after speaking to the police from outside, attempting to convince them to remove the barriers, “was lifted by the Egyptian police forces and literally tossed over the fence.”

Nonetheless, over 300 internationals made it to the protest, in a show of solidarity with Gaza’s inhabitants and Palestinian society that has riveted the world’s attention on Gaza, and made front-page news in the Egyptian press. Despite not getting to Gaza, it was unprecedented. As one South African marcher commented, “The Gaza Freedom March got 1,400 people to Cairo to march in solidarity with the Palestinian people. That’s amazing.”