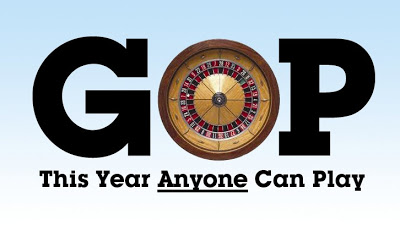 Graphic by Bill Freeland / The Rag Blog.
Republican roulette:
Romney vs. the rebels

As the Republican nominating process enters its whirlwind phase — with nearly a primary a week scheduled over the next three months — it’s not just delegates that will be up for grabs. More fundamentally, it will also be the identity of the party itself.

On the surface, of course, it’s been between Romney and “Anybody But” — a revolving cast of challengers dating back to Donald Trump. But now, as we enter the crucial home stretch, the pitchfork is firmly in the grasp of challenger Rick Santorum.

Yet as the bitterness of the contest has revealed, the nominating process has actually devolved into a rancorous sibling rivalry between two symbolic poles: an entitled Establishment and a diverse rebel insurgency.

So what began merely as a political contest between personalities has become something entirely different: a fight between two radically different paradigms.

But here’s the twist: This could be the year that the losers in the GOP primary process could ultimately have as lasting an influence as the winners on the party’s future as they plot their return.

Say, for example, the party elites get their way — and their man — and Romney is nominated but loses to President Obama.

The elites, who are bitterly opposed by the rebels, will be disgraced and the insurgents vindicated. It will be 1976 all over again, when the party mainstream mistakenly stuck with Ford over Reagan — and lost to Carter. They corrected that mistake four years later, signing on with the Gipper and his purer vision of movement conservatism.

Next time today’s agitators will likely look early on to reincarnate a symbolic Reagan and move still further to the right to win in 2016.

Now compare that to a victory in Tampa by the “Anybody But Romney” wing of the GOP. It would be a stunning victory — but what if they lose to Obama?

In that case, welcome to 1964. That year Goldwater proclaimed extremism was no vice — but learned to his regret that moderation in pursuit of the presidency was a virtue — as he lost to LBJ in a landslide.

What his party learned was the virtue of moderation — and succeeded with Nixon four years later. A loss in 2012 will likely mean the party next time will avoid the mistakes of 1964 and seek a win with a similarly moderate candidate in 2016.

Now what about the Democrats? A parallel scenario could also emerge.

Recent polls, reflecting both better economic trends and perhaps a contrast with the bitter GOP primary battles, give the incumbent Obama a slight advantage over his challengers. But worsening job numbers and high gas prices could still put the outcome in doubt.

Should he lose, the signature policy of his administration, bipartisanship in the face of GOP obstructionism (which has driven many Democrats to distraction), would likely be repudiated — resulting in a more assertive nominee next time. The likely outcome: a more aggressive party and an even more polarized political process.

The lesson in all this: hopes for the future are often haunted by the failures of the past — and sometimes even defined by them. Thus it can be argued that instead of imagining the future, we sometimes settle merely for avoiding the mistakes of the past.

If that is the lesson the losers of 2012 take as a guide for the future, then their party and our nation will be the poorer for it.