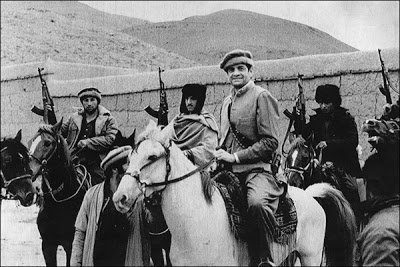 U.S. Rep. Charles Wilson from Texas, on the white horse, visits Afghanistan in 1987. The Hollywood film, Charlie Wilson’s War, starring Tom Hanks and Julia Roberts, was based on his story. Photo from AP / Iconic Photos.
Part 11: 1981-1987
A People’s History of Afghanistan

On March 29, 2010, the Associated Press reported that “a senior military official” in Washington “who was not authorized to speak publicly on the operation” said that “NATO forces in June will make a long-planned assault on the Taliban’s spiritual home in the southern Afghan city of Kandahar,” and that “military officials say they expect `several thousand’” of the 30,000 extra troops that Barack Obama recently ordered to Afghanistan “to be sent to Kandahar.”

The CIA’s SOVMAT program of arming anti-feminist Afghan guerrillas, for example, continued to operate after the Democratic Carter Administration was replaced by the Reagan Administration and William Casey (a former Capital Cities Communications media conglomerate board member who also then owned over $3 million worth of stock in companies like Exxon, DuPont, Standard Oil of Indiana, and Mobil-Superior Oil) became the new CIA director in 1981. As Angelo Rasanayagam’s Afghanistan : A Modern History observed:

Bill Casey’s CIA procurers scoured the globe in search of Soviet-style weapons. Egypt, which had large stockpiles of automatic weapons, land mines, grenade launchers and anti-aircraft missiles delivered by the Soviets was the first source… Other sources were Israel, which had a supply of Soviet-made weapons — captured during the Six-Day War and from Syrian troops and Palestinians in London — and China.

Using Pakistan ’s Inter-Service Intelligence [ISI] as a go-between, the CIA contracted with the Chinese government to manufacture rocket launchers, AK47s and heavy machine guns in return for hard currency and new equipment. China became a major source of supply. As the requirements grew, the CIA arranged for copies of Soviet weapons to be manufactured in factories in Cairo and in the U.S., where one leading firm was given a classified contract to upgrade SAM-7-anti-aircraft missiles…

The CIA’s covert military intervention in Afghanistan in the late 1970s and early 1980s represented “the biggest single CIA covert operation anywhere in the world,” according to Afghanistan: A Modern History. The money the U.S. government’s CIA secretly spent on giving weapons and military aid — via its Pakistani ISI middlemen — to the Afghan Mujahideen guerrillas grew from $30 million to $280 million-per-year between 1981 and 1985.

In addition, Reagan Administration CIA Director Casey also persuaded “Arab governments to contribute to a reserve fund that could be kept secret from Congress and the State Department” during the early 1980s, according to the same book. As a result, in late 1981 the repressive Saudi Arabian monarchical regime “began to match the CIA dollar for dollar in the financing of purchases of weapons for the Afghan resistance, …funneled more than half a billion dollars to CIA accounts in Switzerland and the Cayman Islands,” and made “substantial direct contributions of cash and weapons to its own favorites among the Mujahideen parties” in Afghanistan.

The Bank of Credit and Commerce International [BCCI] in Geneva was the financial institution secretly used by the CIA and the Saudi government in the 1980s to manage the special “Afghan War” accounts — from which the CIA and Saudi government payments were made to the various arms dealers who supplied the weapons needed for the CIA’s covert military intervention in Afghanistan.

By 1989, around $13 billion had been spent by the U.S. and Saudi governments for subsidizing the CIA and ISI’s Mujahideen militias in Afghanistan, and around 50 percent of U.S. government-supplied weapons had been distributed to Hekmatyar’s extremely anti-feminist Hizb-I Islami guerrilla group.

Ironically, one of the strongest proponents in for the escalation of the Reagan Administration’s escalation of Casey’s covert war in Afghanistan in the early 1980s was a Democrat: a now-deceased Democratic Congressman from Texas named Charles Wilson. As John Coole recalled in his Unholy Wars:

The single U.S. Congressman who emerged as CIA Director William Casey’s champion Congressional ally, especially for appropriating money was Democratic Representative Charles Wilson of Texas, one of the most colorful figures of the Afghan jihad… Always ready to promote the interests of the Texas defense contractors who supported him, he got seats on the powerful House Appropriations Committee and Defense Appropriations Subcommittee…

Wilson made 14 separate trips to South Asia… In 1982, he began intensive work in secret hearings of the Senate Appropriations Committee to inject more and more money into the Afghan enterprise. On one trip in 1983 he crossed into Afghanistan with a group of Mujahideen…

Wilson’s best ally for money decisions below Casey’s level in the CIA was John N. McMahon, the agency’s deputy director since June 1982…

McMahon did support Wilson’s efforts for more money for the jihad, after setting up, during Stanfield Turner’s watch as CIA Director [during the Democratic Carter Administration], many of the original financing and supply arrangements for the Mujahideen…

In late 1984, according to Afghanistan: A Modern History, the U.S. Congress, “in a rare show of bi-partisanship, and prompted by friends of the Afghan resistance such as Charles Wilson, Gordon Humphrey, Orin Hatch and Bill Bradley, also took the lead in voting more money for the Mujahideen than the Reagan administration requested, sometimes by diverting funds from the defense budget to the CIA.” And CIA Director Casey personally visited three secret training camps in October 1984 to watch some of the Mujahideen guerrillas being trained in Pakistan to wage war in Afghanistan.

The CIA station chief in Pakistan from 1986-1989 who was apparently responsible for arming the Mujahideen was Milton Bearden, according to James Lucas, in an article entitled “America ’s Nation-Destroying Mission In Afghanistan.” In Bearden’s view, “the U.S. was fighting the Soviets to the last Afghan,” during the 1980s. And around 1.5 million to 2 million Afghans would be killed during the CIA-sponsored Afghan war, before all Soviet troops were eventually withdrawn by the Gorbachev regime in the late 1980s.

Thousands of Afghan civilians were apparently killed, for example, as a result of the Soviet military’s bombing of apparently 12,000 rural villages in Afghanistan (as part of the People’s Democratic Party of Afghanistan [PDPA] government’s “counterinsurgency” campaign) during the 1980s.

As Afghanistan: A Modern History observed, “all pretenses that the United States was not directly involved in the Afghan war were dissipated at a stroke late 1984,” when Republican President Reagan then publicly authorized “the delivery of Stinger surface-to-air missiles to the Mujahideen.” The delivery of Stinger anti-aircraft missiles to the Mujahideen by the CIA “would begin to turn the tide of the” Afghan “war in 1985” against the Soviet military forces and Afghan armed forces that supported the PDPA regime in Afghanistan, according to Unholy Wars. As James Lucas noted in his “ America ’s Nation-Destroying Mission In Afghanistan” article:

“Between 1986 and 1989, the U.S. provided the Mujahideen with more than 1,000 of these state-of-the-art, shoulder-fired anti-aircraft missile launchers which by some accounts prevented a Soviet victory. Stinger missiles were able to destroy low-flying Soviet planes which forced them to fly at higher altitudes, thereby curtailing the damage they could cause.”

By 1987, the U.S. government was giving the anti-feminist Afghan guerrillas nearly $700 million in military assistance per year; and were it not for the involvement of the CIA and the Pakistani government’s ISI in the 1980s war in Afghanistan, the Mujahideen might not have eventually succeeded in violently overthrowing the PDPA regime by the early 1990s. As Afghanistan: A Modern History noted,

…the greatest advantage that the Mujahideen as a guerrilla force had were the safe havens in Pakistan to which they could withdraw from time to time to rest and refit, gather the supplies that they needed, receive training in the use of the increasingly sophisticated weapons that the United States was delivering, and be briefed on the superior intelligence… that the CIA was providing through the ISI.

The same book revealed some details of how the CIA and ISI organized their military units of Afghan refugees to attack Afghanistan —in violation of international law—during the late 1970s and 1980s:

Within the ISI, the Afghan Bureau was the command post for the war in Afghanistan and operated in the greatest secrecy, with its military staff wearing civilian clothes. Its head reported to [then-ISI Director General] Akhtar [Abdur Rahman], who also devoted some 50 percent of his time to the affairs of the Bureau and reported directly to [Pakistani President] Zia.

The respective roles of the CIA and the ISI’s Afghan Bureau are best summed up by the army officer personally selected by Akhtar in October 1983 to head the Bureau, Brigadier Mohammad Yousaf:

“To sum up: The CIA’s tasks in Afghanistan were to purchase arms and equipment and their transportation to Pakistan; provide funds for the purpose of vehicles and transportation inside Pakistan and Afghanistan; train Pakistani instructors on new weapons or equipment; provide photographs and maps for our operational planning; provide radio equipment and training, and advise on technical matters when requested. The entire planning of the war, all types of training for the Mujahideen, and the allocation and distribution of arms and supplies were the…responsibility of the ISI, and my office in particular.”

Around 80,000 Mujahideen Afghan guerrillas were trained, for example, in camps in Pakistan between 1984 and 1987. At the ISI Afghan Bureau’s 70 to 80 acre Ojhri Camp in Rawalpindi — not too far from Pakistan’s capital city of Islamabad — were barracks, training areas, mess halls, and a warehouse from which 70 percent of the weapons used by the Afghan Mujahadeen were distributed, according to Afghanistan: A Modern History. The anti-feminist Afghan combatants were mostly recruited by the ISI and CIA from the over 3.2 million Afghan refugees who settled in Pakistan and the over 2.9 million Afghan refugees who settled in Iran between 1980 and 1990.

Yet despite the opposition of the anti-feminist Mujahideen, the PDPA government refused to scrap its program for female equality and female emancipation in Afghanistan during the 1980s. As Gilles Dorronsoro wrote in his 2005 book Revolution Unending: Afghanistan: 1979 to the Present:

The regime maintained the proportion of women members of the party at around 15 percent… In addition, there were women members of the party militias, especially in Kabul and in some of the northern towns. The most marked changes were in public education… In Kabul half of the holders of the public teaching posts were women, as were the majority of the staff of the Ministries of Education and Health. Similarly, 55 percent of the students were girls… Dress codes showed the beginnings of a break with traditional practices, although these innovations were mostly restricted to the modern areas of the capital and to a lesser extent of Jalalabad and Mazar-I Sharif…

In the Afghan countryside, however, “the Mujahideen imposed an order that was much more conservative or even fundamentalist,” the “prohibition of women’s participation in public activities became stricter,” and “opposition from fundamentalists… restricted the educational opportunities for girls,” according to the same book.

1 Response to Bob Feldman : A People’s History of Afghanistan /11