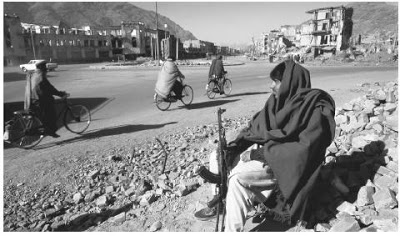 An Afghani man sits in the rubble of Kabul, Afghanistan in 1995. Image from Countries and their Cultures.
Part 13: 1992-1998
A People’s History of Afghanistan

Since October 2001, the Pentagon has been waging an endless war in Afghanistan against the Taliban regime. Yet after the Taliban guerrillas first marched into Kabul in September 1996, an editorial in the October 8, 1996, issue of The New York Times stated that the Taliban regime “has brought a measure of stability to the country for the first time in years.”

In Afghanistan: The Mirage of Peace, Chris Johnson and Jolyon Leslie indicated why the coalition of CIA and ISI-organized Mujahideen guerrilla groups that initially replaced the PDPA regime in Afghanistan in April 1992 failed to bring “stability to the country,” when they described what happened after the Mujahideen militia groups marched into Kabul:

About 20,000 people died in the fighting between April 1992 and December 1994 that followed the “liberation” of Kabul. Almost three-quarters of those who survived were forced to leave their homes and move across the city, or flee to squalid camps for the displaced in Jalalabad… Kabul continued to be the focus for rocket attacks from the outside until 1995…

In August 1992, for example the Mujahideen leader whose armed group had received the most military aid from the CIA in the early 1980s, Gulbuddin Hekmatyar, “launched a barrage of rockets against Kabul from his bases north and east of the city that killed over a thousand civilians,” according to Angelo Rasanayagam’s Afghanistan: A Modern History.

The same book also noted that in January 1994, Hekmatyar’s Mujahideen group also “unleashed the most ferocious artillery and rocket attacks that Kabul had ever experienced” and “these attacks destroyed half the city, took some 25,000 civilian lives, and caused tens of thousands of Kabalis to seek safety in Pakistan or in the north” of Afghanistan.

The arrival of the Mujahideen in 1992 inaugurated a range of restrictions from the wearing of the veil to the ban on women appearing on television… In Kabul all the armed groups… were guilty of rapes and kidnappings, leading sometimes to the suicide of young girls who had been dishonored. The very few women who dared to dress in the western style in the modern part of Kabul were harassed by the Mujahideen. All this was a new departure, and a contrast, since Afghan women had seldom before been threatened with deliberate acts of violence and certainly not with rape…

But, according to John Lucas’s “America’s Nation-Destroying Mission in Afghanistan” article, although the Mujahideen now set up a “Ministry for the Promotion of Virtue and Prevention of Vice” to “control women’s dress codes and the length of men’s beards,” under the Mujahadeen government “women were still allowed to work” and were still able to be employed in professional jobs in Kabul.

Outside of Kabul, the Afghan countryside was pretty much ruled by Afghan warlords and Afghan drug lords. And by 1994, the country in the world that produced the most heroin was now Afghanistan.

But in November 1994 a new anti-feminist, Islamic guerrilla group of Afghan Pashtun tribes that was apparently backed by Saudi government money and Pakistani government weapons — the Taliban — initiated its military campaign to gain control of Afghanistan’s government. As Afghanistan: A Modern History observed, “the heavy Pakistani involvement in arming, training and even providing logistical support in Taliban field operations was no secret to informal observers as early as 1995” and “the generous Saudi funding was also well known.”

The Democratic Administration of Secretary of State Clinton’s husband also apparently wished, during the mid-1990s, to see the Taliban obtain control of the Afghan government, after one of its diplomats, Ms. Robin Raphael, held a meeting with Taliban representatives. According to the same book:

The United States… was not an uninterested party. An eventual take-over by the Taliban… served both the U.S. political strategy of “containing” [Iran], as well as its economic interests in fostering… an alternative land route through Afghanistan and Pakistan for the exploitation by U.S.-led companies of the seemingly inexhaustible oil and gas reserves of Central Asia.

Dator Zayar’s “Afghanistan: An Historical View” article also asserted that “the Taliban were the creation of the Pakistan military and intelligence establishment with the active support of the CIA” and that “U.S. imperialism is directly responsible for the Taliban reaction in Afghanistan.”

Less than three weeks after Taliban guerrilla fighters from Pakistan captured in two days the Afghan city of Kandahar on November 3, 1994, the number of Taliban guerrilla fighters in Afghanistan had rapidly increased to 2,500. And, according to Afghanistan: A Modern History, many of these Taliban insurgents were “armed with brand-new weapons that could only have come from Inter-Service Intelligence [ISI] warehouses in Pakistan.” So, by February 1995, the Taliban forces were able to capture the base near Kabul of Hekmatyar’s Mujahadeen forces.

Although the Taliban apparently began to act more independently of the Pakistani government in March 1995, during the summer of 1995 the Pakistan government’s ISI agency trained more Taliban guerrillas; and, according to Afghanistan: A Modern History, there is “no doubt that Pakistan through its ISI had played a key role in reinforcing the Taliban capacity to wage war.” The Afghan city of Jalalabad was then captured by the Taliban on September 12, 1996, and by September 26, 1996, the ISI-trained Taliban troops now controlled Kabul. By 1998, over 90 percent of Afghanistan’s territory was now controlled by the Taliban’s new Afghan government.

Coincidentally, after an October 21, 1995 agreement was signed between Turkmenistan President Saparmurad Nizazov, Unoca, and Unocal’s business partner — the Saudi-owned Delta oil company — to build a gas pipeline through Afghanistan, Unocal (which became a subsidiary of Chevron Texaco in 2005) began to handle “public relations for the Taliban and sponsored visits to Washington and Houston during the mid-1990s,” according to Afghanistan: A Modern History. As the same book explained:

Behind… U.S. acquiescence in an eventual Taliban takeover, engineered by its Pakistan and Saudi allies, lay the Unocal game plan. Unocal was a consortium of U.S. oil companies formed to exploit the hydrocarbon reserves of Central Asia. Unocal and its Saudi partner, Delta, had hired every available American involved in Afghan operations during the jihad years, including Robert Oakley, a former ambassador to Pakistan, and worked hand-in-glove with U.S. officials. Unocal staff acted for a time as an unofficial lobby for the Taliban and were regularly briefed by the CIA and Pakistan’s ISI.

In U.S. eyes, the most important function of the Taliban would have been to provide security for the roads, and potentially for the gas and oil pipelines that would link the Central Asian states to the international markets through Afghanistan rather than Iran… The U.S. assistant secretary of state for South Asian Affairs, Robin Raphael, went so far as to state that the Taliban capture of Kabul was “a positive step.”

Following the September 1996 takeover of Kabul by the Taliban regime, Unocal Vice President Chris Taggart also said on October 2, 1996, that “if this leads to peace, stability, and international recognition, then this is a positive development.”

Support for the Taliban by the Clinton Administration apparently became “an economic priority,” after Unocal executives signed its October 21, 1995 agreement with the Turkmenistan president, based on potential gas exports evaluated at $8 billion, according to Forbidden Truth: U.S.-Taliban Secret Oil Diplomacy and the Failed Hunt for Bin Laden by Jean-Charles Brisard and Guillaume Dasquie. Chris Johnson and Jolyon Leslie also observed in their Afghanistan : The Mirage of Peace book:

Afghanistan potentially offered advantages over all the alternative pipeline routes… The Clinton administration weighed in heavily on behalf of Unocal… In February 1997, and again in November of that year, Taliban representatives were in Washington meeting both Unocal and State Department officials. Unocal estimated it had spent some $15-20 million on the pipeline project… It hired… Zalmay Khalizad… a member of the National Security Council… Hamid Karzai… in 1997 represented Unocal in negotiations with the Taliban leadership…

Yet for Afghan women in Kabul, the victory of the Unocal, Clinton Administration, Pakistani government, and Saudi government-backed Taliban in September 1996 apparently “represented the triumph of the most fundamentalist tendency,” according to Revolution Unending. The same book also observed that the “earliest victims” of the new Taliban regime in Afghanistan “were educated women, who were mainly in Kabul and numbered around 165,000.” As a March 1998 article by N.O.W. vice president Karen Johnson noted:

On Sept. 27, 1996, the Taliban issued an edict that forbade women and girls from working or going to school. The edict took effect immediately, and women who tried to go to work the next day were beaten and forced to return home… On Sept. 26, 1996, women were 70% of the school teachers, 40% of the doctors, 50% of government workers and 50% of the university students… A woman must be accompanied by a male relative in order to leave the confines of her home…In the city of Kabul alone there are 40,000 widows who can no longer work to support themselves and their families… The Taliban asserts that the prohibitions for women and girls are religious and protective in nature…

But, according to Revolution Unending, for “country women” in Afghanistan “the principal effect of the arrival of the Taliban was an end to insecurity,” since rural Afghan women already lacked the educational and work opportunities that urban Afghan women lost after the Taliban militias entered Kabul in September 1996.

At least one writer has questioned the assertion that all actions of the Taliban regime’s Afghan government between September 1996 and November 2001 deserved condemnation. In his book, The World Is Turning, Don Paul wrote that “the Taliban… rebuilt schools and hospitals,” “eliminated (according to a year 2000 United Nations drug Control Program study) opium cultivation in their territory,” and “barred the selling of women as chattels.”

In addition, the Taliban (according to a speech by their roving Ambassador, Sayyid Rahmatullah Hashemi, at the University of Southern California on March 10, 2001) claimed that it allowed women to “work in the Taliban’s Ministries of Health, of Education, of the Interior, of Social Affairs” and allowed” more women than men” to “attend the schools of Medical Science that the Taliban had re-opened in all of Afghanistan’s major cities.”

Another early victim of the Taliban occupation of Kabul on September 26, 1996, was the Afghan government leader whose regime had collapsed in April 1992, Najibullah. Between April 1992 and September 1996, Najibullah had enjoyed sanctuary at the United Nations diplomatic premises in Kabul . But “one of the Taliban’s first acts after entering Kabul was to violate the United Nations diplomatic premises” to “torture and execute” Najibullah “and two companions in a particularly gruesome manner and expose their mutilated bodies in a Kabul square,” according to Afghanistan: A Modern History.

Datar Zayar’s “Afghanistan : An Historical View” article also observed that, additionally, the Taliban regime “unleashed a reign of terror with ethnic cleansing in Bamiyan and Mazar-e-Sharif and severe repression against oppressed religious minorities and nationalities” in Afghanistan.