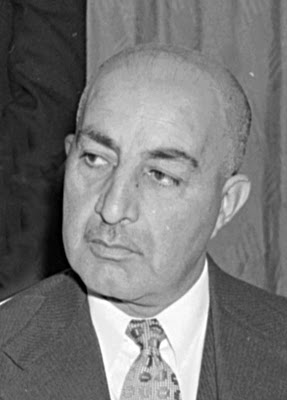 Afghanistan President Mohammad Daoud was killed, along with his family, in “a burst of gunfire” while resisting arrest in 1978. Photo from Wikimedia Commons.
Part 8: 1977-1978
A People’s History of Afghanistan

Right-wing anti-feminist Islamic parties and Mujahideen or Taliban militias have exercised a special influence in Afghan politics since the 1980s. But the history of people in Afghanistan between 1977 and 1978 indicates that the radical secular left People’s Democratic Party of Afghanistan [PDPA] also played an historically significant role in Afghan politics.

In July 1977, for example, Noor Mohammad Taraki’s PDPA-Khalq faction/party and Babrak Karmal’s PDPA- Parcham faction/party agreed to form one united PDPA party, with a 30-member Central Committee in which each faction would be represented equally. After Mohammad Daoud seized control of Afghanistan ’s government in 1973, the Khalq faction of the now-united PDPA had apparently been successful in persuading more members of the Afghan military to join the PDPA.

A key role in the PDPA-Khalq faction’s recruitment of members of the Afghan military into the PDPA was apparently played by a graduate of Kabul University, the University of Wisconsin, and Columbia University Teachers College named Hafizullah Amin, who had lived and studied in the United States in the late 1950s and early 1960s.

But between July 1977 and April 1978, Afghan ruler Daoud was apparently “moving towards a one-party dictatorship by banning all political parties and opposition newspapers and by setting up his own National Revolutionary Party,” according to Afghanistan: A Modern History by Angelo Rasanayagam. Yet 85 percent of Afghanistan ’s 15 million people in March 1978 were still “either peasants who made a precarious living off the land, or nomads.” The same book also indicated how the standard of living for most people in Afghanistan under the Daoud regime compared to the standard of living existing in other countries of the world in March of 1978:

The economic and social indicators relative to Afghanistan were the worst in the world. Per capita income was $157… It was the most backward country in the world with respect to energy consumption, with almost the entire rural population having no access to electricity. The country also ranked among the lowest in the world in terms of public health facilities, with one doctor for every 16,000 Afghans, 80 percent of the doctors being concentrated in Kabul… 76 percent of Afghan children had not received any education, with no more than 4 percent of rural girls having ever attended a primary school. Afghanistan occupied the 127th place in the world in terms of literacy…

But after the autocratic Daoud regime apparently imprisoned or executed numerous PDPA-Parcham leaders and activists — and following the assassination of a leading PDPA-Parcham faction activist and Afghan Marxist intellectual, Mir Akbar Khyber (by the two gunmen who had led him out of his house), on April 17, 1978 — Afghan government ruler Daoud was killed on April 28, 1978, during Afghanistan’s “Saur [April] Revolution” of April 1978. Yet according to Afghanistan: A Modern History, the April 27, 1978, Afghan Revolution “was in fact a military coup carried out by leftist officers of the [Afghan] armed forces under the direction of the PDPA without any popular participation.”

Following the murder of PDPA activist Mir Akbar Khyber (who was the editor of the Parcham faction’s Parcham newspaper), the PDPA had organized a funeral procession and demonstration by 15,000 supporters at which PDPA leaders Babrak Karmal and Noor Mohammad Taraki each gave anti-imperialist speeches.

But the Daoud regime had responded to the demonstration by arresting Karmal, Taraki and a few other PDPA leaders during the night on April 25, 1978, and early hours of April 26, 1978. According to Afghanistan: A Modern History, however, “the arrests of the PDPA leaders implied that their sympathizers in the armed forces had to take urgent action to forestall their own arrests and certain execution by Daoud.”

So, after first taking over the armories, command centers and radio station in Kabul on April 27, 1978 — and announcing on Radio Kabul that a military council led by a pro- PDPA-Parcham faction Afghan Air Force officer, Lt. Col. Abdul Qadir Dagarwal, now controlled Afghan’s government — supporters of the PDPA-Khalq faction within the Afghan military (led by Lt. Col. Mohammad Raf of the Fourth Armored Corps and his troops) overcame the resistance of Daoud’s 2,000-man presidential guard (most of whom were apparently killed in the fighting) — and seized Afghanistan’s presidential palace in the early hours of April 28, 1978.

After Daoud apparently resisted arrest by wounding one of the pro-PDPA military officers who attempted to arrest him, Daoud and his family were then “killed in a burst of gunfire” by other pro-PDPA military officer-led troops, according to Afghanistan: A Modern History. The same book also notes that “except for a strong note… protesting against the arrests of the PDPA leaders… there was no Soviet involvement in what was purely an Afghan affair, not-withstanding Cold War-biased Western reports to the contrary.”