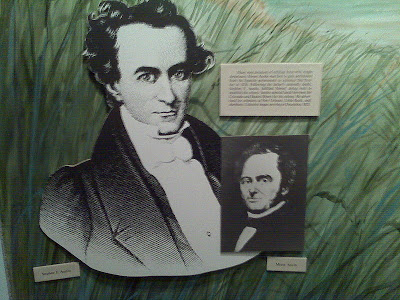 [This is the second installment of Bob Feldman’s new Rag Blog series on the hidden history of Texas.]

White English-speaking Texans of wealth have exercised a special influence over the direction of Texas history for many years. Yet it wasn’t until Dec. 21, 1821, that the first white Anglo, Mary James Long, was born on Texas soil.

And long before any white Anglos from the United States had settled in Texas in the early 19th-century, Spanish-speaking Texans had already, in the 18th century, developed the cattle ranching techniques such as the round-up, branding, roping, and herding from horseback, for which Texas later became well-known throughout the world as a result of Hollywood movies during the 20th century.

White Anglos only began crossing the border from Louisiana and into New Spain territory in Texas around 1815. So, not surprisingly, in the early 1820s the number of Native Americans who (as members of tribal nations like the Cherokees, Delaware, Shawnees, etc.) lived in Texas — 20,000 — was still greater than the number of white Anglo settlers who lived in Texas.

But in November 1820, a white Anglo named Moses Austin (accompanied by his African-American slave, Richmond) went to San Antonio and met with local authorities to talk about setting up an Anglo settler colony in not yet densely-populated Texas. And following Moses Austin’s death in June 1821, his son — Stephen Fuller Austin — established a settler-colony in Texas in December 1821, on land granted by Texas’s then-governing authorities.

Since thousands of acres of Texas’ best farmland were being offered by Stephen F. Austin to prospective Anglo settlers at a much cheaper price (10 cents per acre) than what land was then selling for in the United States — and on credit — the number of Anglo settler-colonists in Austin’s Texas colony quickly increased during the 1820s.

Although the Empire of Mexico’s Colonization Law was voided by Mexico’s new federal republican government by March 1823, the land grant to Austin’s colony in Texas continued to be recognized as valid by the new Mexican federal republican government. But under the March 28, 1825 Colonization Act passed by the state government of Coahuila in Mexico (of which Texas was now a part), Anglo settlers in Austin’s colony had to agree to become both Mexican citizens and Catholics — in exchange for being given land in Texas (for less than $100 in fees) by Mexico’s governing authorities.

But the newly-arrived white Anglo settlers soon began to create an economy based on the enslavement of African-Americans within Texas, and by 1825, Austin’s Anglo colony included 69 white slaveholders — mostly settlers from the southern United States region — who owned 443 slaves of African-American descent.

A white settler from Georgia, Jared E. Groce, for example, brought 90 slaves with him when he settled in Texas, establishing a plantation there in 1822, and apparently became one of the wealthiest settler-colonists. And around 25 percent of the 1,800 people who lived in Austin’s colony in Texas by 1825 were African-American slaves.

In his Gone To Texas, professor Randolph Campbell indicated the economic motive and the ideological reason for the white Anglos who settled in Austin’s colony deciding to set up a slave labor-based economic system in Texas during the 1820s, when he wrote:

A trend toward cash-crop agriculture developed almost immediately… Cotton production depended on slavery, which in turn provided the strongest link between Texas and the American South… Anglo-Americans made slavery an institution of significance in Texas beginning in the 1820s because they saw it as economic necessity… Free labor could not be hired where land was so inexpensive… Most Texas immigrants… held racist views that allowed them to see nothing wrong with the practice of whites owning blacks in order to profit from their labor…

So, not surprisingly, a few years after the Republic of Mexico legally prohibited the further importation of slaves of African-American descent into Mexico in 1824, a minority of the Anglo settlers in eastern Texas, led by Haden Edwards, declared their independence from Mexico on Dec. 21, 1826 and attempted to establish an independent “Republic of Fredonia.”