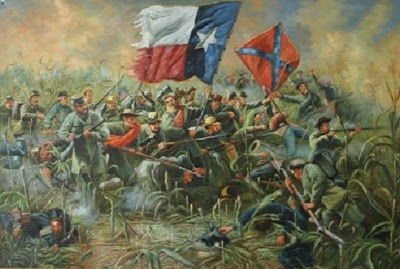 Between 12,000 and 15,000 Texas lost their lives in the Civil War. Painting from the Texas Civil War Museum.
The hidden history of Texas

[This is Part 6 of Bob Feldman’s Rag Blog series on the hidden history of Texas.]

In 1861, the slave-owning Anglo political leaders of Texas decided that the state should secede from the United States and join the Confederacy during the U.S. Civil War.

According to Alwyn Barr’s Black Texans, “as their declaration of causes repeatedly proclaimed, white Texans seceded in 1861, primarily to defend `the servitude of the African to the white race.’” And “as Union armies pushed into Arkansas and Louisiana,” the “slaveholders from each state became refugees to Texas” and “they brought their slaves,” according to Barr’s “Black Texans During the Civil War,” an essay that appeared in Donald Willett and Stephen Curley’s Invisible Texans.

As a result, “by 1864, the slave population” in Texas “probably grew to 250,000.” In 1862, in Texas’s Smith County, authorities “arrested over 40 slaves and hanged one after hearing rumors of a plot to revolt,” according to the same essay.

White opponents of Texas seceding from the United States to join the Confederacy who lived in Texas were also repressed between 1861 and 1865. As Randolph Campbell’s Gone To Texas recalled, “some of the more vocal Unionists had to leave Texas” and “James P. Newcomb, editor of the San Antonio Alamo-Express, fled to New Mexico after a mob attacked his press.”

Although most white Texans “continued throughout the war to support the Confederacy as they had supported secession in the first place,” according to Gone To Texas, some organized support for the U.S. government’s Lincoln Administration and the cause of the Union Army did develop inside Texas during the Civil War. As the same book recalled:

Small groups of Unionists living in regions that voted against secession organized internal opposition to the Confederacy… Germans in the Hill County northwest of San Antonio formed a Union Loyal League with its own military companies… In the Spring of 1862 Confederate officials sent Texas troops into the region to disband the military companies and enforce the conscription law, whereupon 61 of the Unionists, mostly Germans led by Frederick “Fritz” Tegener, decided to go to Mexico and from there join the United States Army.

They… were overtaken by a detachment of 91 Texas Partisan Rangers… while camped on the Nueces River. Attacking before dawn on Aug. 10, 1862, the Confederates killed 19 of the Germans and captured nine who were badly wounded. The remaining Unionists escaped… After the battle, state troops executed the nine wounded Germans, and nine of those who escaped were caught and killed before they reached Mexico…

In Cooke County… the passage of conscription led to the formation of a secret Peace Party that opposed the draft and supported the Union. Rumors that the Peace Party planned to… foment a general uprising led to the arrest on October [1862] of more than 150 suspected insurrectionists by state troops…

An extralegal “Citizen’s Court”… found seven leading Unionists guilty of treason and sentenced them to death. At this point, a mob… lynched 14 more of the prisoners and killed two who tried to escape…When unknown assassins killed Col. Young [of the Eleventh Texas Cavalry]…the jury then sentenced another 19 men to hang, bringing the total number of victims to 42. Texas authorities condoned this “Great Hanging at Gainesville”…

The military conscription law that provoked more organized internal opposition in Hill County and Cooke County, Texas, to the South’s Confederate Government had been passed in April 1862 by the Confederate Congress. As a result, all white males in Texas who were between 13 and 46 in 1860 — except for any white males whose work involved them in supervising 20 or more slaves — were now in danger of being drafted into the Confederate Army for as long as the U.S. Civil War continued.

So, not surprisingly, “nearly 5,000 Texans deserted from Confederate and state service, and an unknown number avoided conscription” by hiding “in isolated areas throughout the state — for example, the Big Thicket in Hardin County and the swamp bottoms of northeast Texas” or “in the northwestern frontier counties,” according to Gone To Texas. And, according to David Humphrey’s Austin: An Illustrated History, “draft-dodging was especially common among Austin’s unionists.”

But slightly more than 50 percent of the white males in Texas who were subject to the Confederate government’s draft during the Civil War were unable to avoid being drafted, and between 1861 and 1865 between 60,000 to 70,000 white men in Texas served in either the Confederate Army or in Texas state military units. And thousands of these military conscripts from Texas died during the U.S. Civil War. As Gone To Texas observes:

Approximately 20 to 25 percent of Texas soldiers died while in the army. More than half of these deaths resulted from a variety of illnesses… Deaths in battle and Union prisoner-of-war camps accounted for the other lives lost. The final death toll can be estimated at between 12,000 and 15,000 men, most of them in their twenties and thirties.

According to Austin: An Illustrated History, Texas’s “loss `in bone and blood’” during the Civil War was “proportionately higher than that of any northern state.”

Texas was one of the Southern states that had considerable prosperity during the war. She was outside the area of conflict; excellent crops were raised and slave labor was plentiful. Many slaves were deported to Texas for protection… so that Texas could furnish food and raw material for the Confederate States; and on the other hand, when the blockade was strengthened, Texas became the highway for sending cotton and other goods to Europe by way of Mexico.