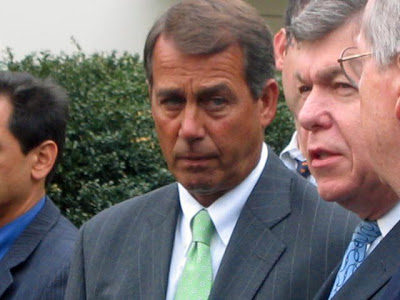 ‘Boehner is like a talking toy that repeats the same thing over and over when you pull its string.’

There is great speculation that GOP house minority leader John Boehner is getting progressively darker and darker because he spends so much time on his hidden Capitol office tanning bed. But others opine that his conservative rhetoric is getting so burned out he has become a walking, nay-saying human rotisserie.

Boehner is like a talking toy that repeats the same thing over and over when you pull its string. His string became more available for regular pulling after he campaigned to clean things up after the Jack Abramoff lobbying scandal hastened Tom DeLay’s departure. In spite of Boehner’s own links to Abramoff, he became House Majority Leader in 2006. And he has used his higher profile position to oppose anything not ultraconservative ever since. Some typical examples:

And these examples are just a quick skim off the top of Boehner’s “to hell with the average working American” vision for our nation. Now that he and his conservative cohorts have been forced to pull back from the private trough from which they have gorged themselves for the past eight years, Boehner still doesn’t get it.

His strident opposition to “spending taxpayer dollars for a trillion dollar bailout” suggests he has no knowledge of the crippling recession and subsequent damage Japan suffered in the 1990’s. Their conservative leaders opposed vigorous, massive and immediate governmental action after their spectacular market crash. Japan learned too late that conservative tight-fisted refusal to act aggressively and immediately with massive governmental cash infusions would lead to a grinding recession so severe that it would take more than a decade to recover.

Boehner represents a dwindling base of conservative Republicans now mostly concentrated in a block of Southern States. The Republican National Committee now clearly seeks to change and expand that base after an historic election of their own. The new RNC has just elected their first ever African American chairman. Michael Steele, after six grueling ballots, beat out top white contenders, including Katon Dawson, who even quit his whites-only country club membership for a shot at the position.

The RNC’s first black chairman was elected though he was not even a RNC committee member, which almost never happens. The mood for change was so strong that Tennessee Republican Party Chairman, Chip Saltsman, the boob who mailed out the “Barack the Magic Negro” music CD’s to fellow Republicans for Christmas, didn’t even make the ballot.

So maybe Chairman Steele will have John Boehner in for a private sit-down real soon and a chat about a wider Republican vision for all of America that could actually allow true civil, bipartisan political discussion. And who knows, maybe Boehner will unplug his tanning bed and no longer think he has to be the darkest-skinned Republican mouthpiece. Chairman Steele is now the real deal.