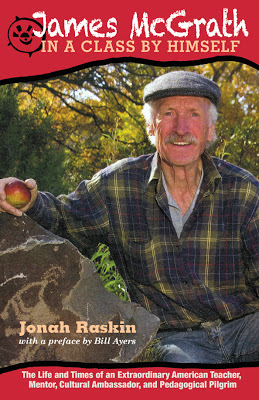 Raskin’s new biography is no simple valentine from one teacher to another. It is an in-depth and compelling look, not only about McGrath’s life journey, but also the sacrifices he made along the way.

Teaching, when done correctly, is an all-consuming passion. There is a popular saying from a popular book: “Teach like your hair’s on fire.” In author Jonah Raskin’s new biography, James McGrath: In A Class By Himself, he writes about a teacher who taught like his life was on fire.

Raskin should know. Beyond being a prolific author, poet, and journalist — Raskin, a regular contributor to The Rag Blog, has also written biographies of Jack London, Allen Ginsberg, and Abbie Hoffman — he was a professor for over 30 years, teaching topics ranging from literature to media law and everything in between.

He himself has a cadre of dedicated former students whom he has mentored over the years and he recently became the first ever Professor Emeritus in the history of the Communication Studies Department at Sonoma State University. But his new biography is no simple valentine from one teacher to another. It is an in-depth and compelling look, not only about McGrath’s life journey, but also the sacrifices he made along the way.

Some of the relationships are now under repair. It’s something McGrath doesn’t like to talk much about — but his absence of words speaks volumes about the sacrifices that many teachers and artists have to make for their teaching and art and for teaching as an art.

McGrath grew up in Depression-era Tacoma, Washington. Though he first considered life as a geologist and studied at the Central Washington College of Education, a poor algebra grade led him to reassess and a $1,500 scholarship to the University of Oregon at Eugene helped McGrath find his true artistic path. While getting his M.F.A. from the University of Washington McGrath began teaching at Columbia High School and his legendary journey began.

And when teaching and art fused together McGrath found his life’s purpose. Raskin deftly captures McGrath’s journeys around the globe in what he calls “the life and times of an extraordinary American teacher, mentor, cultural ambassador, and Pedagogical pilgrim.” 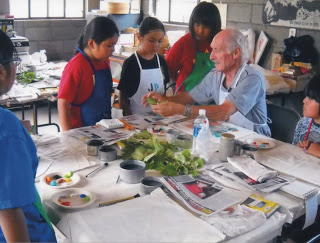 McGrath with students at Hopitutuqaki (the Hopi School), Hotevilla, Arizona. Image from James McGrath: In a Class By Himself.
Traveling the world teaching art, making art, and mentoring generations of students may sound inspiring to some — and it is — but Raskin does not shy away from describing McGrath’s intensity, toil, and sacrifice as he struggles to bring art and the ways of creativity to students from Asia to Europe and the American Southwest where he became a leader in the Institute of American Indian Arts.

McGrath found himself working across cultures and finding a place where cultures can be shared and honored, and he was also a teacher and administrator at U.S. Army bases across the world.

As a teacher and advisor in the Institute of American Indian Arts, McGrath, the program, and its students rose to national prominence — garnering the attention of presidents and the national press of the 1960s and 1970s. It was a time when the American Indian Rights movement held the national attention, a time of social foment and revolutionary ideas and ideals.

But even this, perhaps McGrath’s crowning achievement, was not without controversy as he was a Caucasian teaching and helping to bring American Indian art to the forefront. Despite that, his students considered him to be the same as them — just as his students in Asia and Europe did. It was in that sense that McGrath’s philosophy of creating — from the center out and expressing oneself genuinely whatever the cost — transcended racial and ethnic boundaries.

And, as he aged, it also transcended the boundaries of time as his students became artists and teachers themselves. It is not too much to say that McGrath, who is still creating today, is revered as a friend and legend among those who have been a part of his teaching — and it is a testament to the man’s personal philosophy of art as life and teaching art as life.

Raskin has done an assiduous job researching McGrath and interviewing McGrath and those who have been in his sphere of influence for decades. His compelling writing style brings readers into a book about someone they, likely, have never heard of but need to hear about. As such, this book is a must read for teachers and students.

Far too often people want to read biographies about people they’re already familiar with. Most often political figures like Churchill or Kennedy and entertainers or Nobel laureates. And something can be learned from doing that.

But it’s in hearing the stories of the unsung greats — such as James McGrath — that people can come to learn the power of one individual, one regular man who became an extraordinary teacher, and who has made a positive difference in the world.

This is an all-true-tale of a teacher who is still teaching after 60 years and continuing to inspire generations. Jonah Raskin has given us a special gift by telling us the story of James McGrath. And I hope one day someone will tell his story just as well.