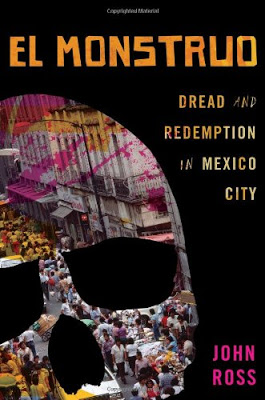 El Monstruo:
John Ross’ history of Mexico
A must read for Texans

The problem with any informed accounting of Mexico is that its historical figures, like assassins, are often deadly, swift, and seemingly mad.

El Monstruo, or “The Monster,” a work by lefty John Ross, published last fall by Nation Books, is ostensibly a history of Mexico City. As such, it faces an insurmountable challenge.

Founded in 1325 and today with a population of about 23 million, Mexico City has over the past century become to its nation what a combined Washington, D.C., New York, and Hollywood would be to the United States.

It is Mexico’s political, financial, and movie capital, and also the seat of light manufacturing. Though it is possible to write an architectural or art history of the city, no one can compile a political history of Mexico City that is not also a chronicle of the rest of Mexico — and nobody has successfully done that in one volume. The 500 pages of El Monstruo rank Ross with the best of those who have tried.

The problem with any informed accounting of Mexico is that its historical figures, like assassins, are often deadly, swift, and seemingly mad. American historians may forever fret over the question, “Who was our worst president?” — Andrew Johnson? Calvin Coolidge? George W. Bush? But none of them held office for more than two terms.

Antonio Lopez de Santa Anna, by contrast, was president of Mexico 11 times, in periods both before and after his capture at San Jacinto. He’s easy to recognize as Mexico’s worst president, but that only makes the historians’ question more vexing: During which term of office was he at his worst?

The American presidents John F. Kennedy and George H.W. Bush suffered serious injuries in foreign conflicts, but Mexico has had two amputee presidents, both of whom lost their limbs in civil wars. If American history is comparative, Mexico’s history is superlative.

Though he is not a writer whom Mexicans call “indigenist” — one who equates the Conquest with the Fall — in analyzing the Revolution of 1810, Ross sympathizes with Father Hidalgo’s dark-skinned hordes, and he paints the mid-19th-century Zapotec president, Benito Juarez, as nearly a saint. According to Ross, the Revolution of 1910, like a massive freeway pileup, left nothing but death and wreckage in its wake. The Revo, Ross argues, was murdered with Zapata, “although it has lurched around like an untidy zombie ever since.”

By not depicting Mexican history as a series of stumbles towards a better day, he breaks from the tradition of writers on the Left, whose scribes always preach hope. Only a few years ago Ross was an admirer of Subcomandante Marcos and the contemporary Zapatistas, but he has given up most of that. In El Monstruo, he predicts that no revolution is coming in 2010, and that the nation’s dominate left-wing formation, the Partido de la Revolucion Democratico, will probably be mired in internal tiffs when the 2012 presidential election comes.

What especially sets Ross apart from both mainstream and left-wing commentators of both countries in discussing Mexico’s straits is his refusal to grant any quarter — after 1940, anyway — to the Partido Revolucionario Institucional, or PRI, which held congressional majorities and the presidency from 1929 until 2000. His exposition of its evolution is important today because the PRI is climbing into power.

From about 1940 onwards, the orthodoxy upheld by scholars and the press — and even the Mexican Communist Party — was that Mexico was a democracy of a unique kind. Its uniqueness lay in its one-party character. Oddly, what qualified it as a democracy was its “pluralism”: though communism was often illegal, communists did opine in newspaper and magazine columns, teach at universities, and produce films. Mexico was not the home of any Red Channels or Hollywood Ten. But student protesters, and union and peasant organizers who tried to distribute handbills risked their lives.

American enthusiasm for PRI peaked, as Ross points out, during the 1988-1992 presidency of Carlos Salinas de Gortari, whom The New York Times billed as a “brilliant theoretician” and the Dallas Morning News called “a man on a white horse.” In contemporary Mexico, though nobody can challenge Santa Anna, Salinas is on the runner-up list of worst presidents. Ross can claim, to his credit, that he never cut any slack to the PRI.

Now 72, he first saw Mexico City in the late Fifties as a Beat expatriate and poet. He still publishes in its genre today. His latest chapbook, Bomba, includes these lines, bound to be of comfort to anybody of his generation and political stripe. Their import is more universal than anything to that has to do with Mexico.

Since his return to Mexico in 1985, Ross has written dozens, perhaps hundreds of dispatches — many of which have been published on The Rag Blog — plus a half-dozen books, almost all for the left-wing press. The last third of the El Monstruo is liveliest because it deals with events and practices that he observed, not from the airy perches of the Establishment press, but on the sidewalks outside of the creaky downtown hotel where he lives. His best paragraphs are about daily life, as in these lines from Pages 293-294:

At first glance the ambulantaje or street commerce appears to be chaotic — but the chaos is fine-tuned. Associations of street vendors impose their own order. The juice vendors come out early to catch the predawn breakfast crowd, taqueros… are on the streets in time to feed those rushing for work. General merchandise, fayuca (domestic appliances and other pirated goods), set up by mid-morning and carry on until dark. Merengue (homemade candy) vendors appear in the afternoon, and the camoteros — sweet potato people with their peculiar whistling carts — take over in the evening.

The best of John Ross, however, is also often the worst of John Ross. The sentence beginning with “General merchandise” is ungrammatical, and he salts his copy with Spanish words and slang, often defined in parentheses, as if El Monstruo were a language text. Sometimes his Spanish is converted into English in a glossary that his editors no doubt compiled. But they missed a lot. Ross once uses the term jipi, which his glossary correctly defines as “hippie” — but what’s the point, to show that the sound of the English “h” is represented by the Spanish “j”?

When he mentions that “La mota is for sale 25 hours a day,” most Texans his age probably know that “mota” is marijuana, but it’s unlikely that most Americans do — and his glossary doesn’t translate that.

I don’t think it stands in his defense that he sins bilingually. “Rateros… were sometimes stomped to death by their intended vics,” he writes. Though his glossary correctly identifies rateros as thieves, as a literate American, I was momentarily puzzled by “vics,” a particle that apparently means ‘victims.’

“ … Paco Stanley was whacked in the parking lot of a glitzy taqueria, ” Ross reports. A television personality, Stanley was shot, killed on the spot in 1999, Ross afterward lets us know. But pages later, he avers that “Another luminary whacked by the still-secret plague was… Manuel Camacho Solis.” The politician Camacho, a victim of the swine flue, is still very much alive. In bypassing useful if common words like “shot,” “killed,” “murdered,” or “stricken” in favor of less precise slang like “whacked,” Ross may have thought he was paying homage to the Beat tradition. But in my eyes, slanginess signals the descent of a writer into the discourse of everyday speech.

Throughout his book, even in chapters about colonial days, Ross intersperses reports on conversations with the regulars at his downtown Mexico City hangout, a restaurant called La Blanca. These pieces are valuable as slices of mundane modern life, but they belong in another volume, perhaps “Chat and Chew with John Ross.” In El Monstruo they take on the character of television or radio commercials, unwelcome breaks from the business at hand.

Despite these flaws, El Monstruo is vital reading, even in a world in which, until a month ago, Islamology was the hottest game in serious journalism. Especially in the days since Sept. 11, 2001, Mexico has been reported as merely the home of hungry hordes and trigger-happy hoodlums. The panic of Arizona is a reflex of a deepening ignorance among Americans of the facts of Mexican life, something which El Monstruo could do a lot to correct.

In my view, however, the book offers something even more important than that. It ought to be required reading — “guilt” reading, even — for the educated class in Texas. Most of the members of this strata, among whose number I include myself, have read a history of New York City, or if not, at least several tomes set in that metropolis. Many literate Texans are fluent in the differences between Chelsea and Queens, but only a few of them can distinguish between Las Lomas and Iztacalco.

Mexico City, my computer tells me, lies 757 miles from Austin; New York is 1515 miles distant, nearly twice as far. Anyone who reads Texas history — or any Texan who merely looks into the nearest restaurant kitchen or onto the nearest construction site, or listens to hallway or airport chatter — knows that Mexico City is a lot more important to our lives than New York ever was; Texans of Mexican ancestry need only sign their surnames to know that.

Any future happiness for Texas is inconceivable without taking account of Mexico, and any belief that New York is somehow more relevant to the state stands as an obstacle to our self-understanding. Ross, even though he’s an old beatnik from Manhattan, would readily agree to that.