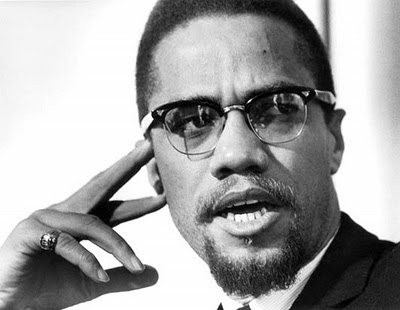 Image of Malcolm X, above, from The Daily Grind. Manning Marable from NewsOne.
Remembering Malcolm and Manning

And finally, I am deeply grateful to the real Malcolm X, the man behind the myth, who courageously challenged and transformed himself, seeking to achieve a vision of a world without racism. Without erasing his mistakes and contradictions, Malcolm embodies a definitive yardstick by which all other Americans who aspire to a mantle of leadership should be measured. — Manning Marable, Malcolm X, A Life of Reinvention, 2011, 493

Professor Manning Marable was a member of the Political Science and Sociology Departments at Purdue University during the 1986-87 academic year. His scholarship, activism, and ground-breaking books and articles inspired faculty and students even though his stay at our university was brief. His classic theoretical work, “How Capitalism Underdeveloped Black America,” along with over 20 books and hundreds of articles, inspired social science scholarship on class, race, and gender.

His weekly essays, “Along the Color Line,” were published in over 250 community newspapers and magazines for years. He once told me that writing for concerned citizens about public issues was the most rewarding work he ever did. He was a role model for all young, concerned and committed scholar/activists. — Harry Targ, Purdue University Black Cultural Center Newsletter, April, 2011

I just finished reading the powerful biography of Malcolm X authored by Manning Marable. My encounter with this book was as fixating and transforming as I remember was my reading of Malcolm’s autobiography in the 1960s.

While I lack the deep sense of Malcolm X’s impact on African American politics and cultural identity that others have, I feel compelled to write something about this reading experience. (Bill Fletcher’s review and analysis of the Marable biography provides much expertise on the subject. “Manning Marable and the Malcolm X Biography Controversy: A Response to Critics,” from The Black Commentator, July 7, 2011.)

During my first year at Purdue University in north central Indiana in 1968, I requested to teach a course called “Contemporary Political Problems.” Since I was on the cusp of becoming a political activist in belated response to the civil rights and anti-war movements, I thought I could use this course to have an extended conversation with students about where we needed to be going intellectually and politically.

My plan was to assign a series of books that reflected different left currents, politically and culturally, and get us all to reflect on their value for understanding 1968 America and what to do about it. We read Abbie Hoffman, Ken Kesey, Herbert Marcuse, the Port Huron and Weatherman statements, and The Autobiography of Malcolm X.

While my students and I embraced, endorsed, or rejected various of these authors, we were profoundly impacted by the power of Malcolm X’s personal biography and transformations from the streets to the international arena. As the word got out about the course, and largely because of Malcolm X, sectors of the Purdue campus got the word that there was a new “radical” in the political science department. Therefore, I owe my growing enrollments to Malcolm X.

More important, during the second semester in which I taught the course, I had a very quiet and respectful African American student in the class. He was a member of Purdue’s track team. One day, after he showed up at the local airport sporting a very thin, almost invisible, mustache the track coach ordered him off the plane. Why? Because he had unauthorized facial hair. His modest symbolic act, growing the mustache, set off extended protest activities over several weeks.

Shortly before this incident, we had spent a couple of weeks in class discussing Malcolm X’s autobiography. During one class period this very quiet person announced to the rest of us that we should consider ourselves lucky that he chose to participate in this class.

I saw him 40 years later for a fleeting moment. He remembered me and said that he had read Malcolm X’s autobiography for the first time in my class. The student’s emerging boldness and his articulated sense of pride must have had something to do with his reading of Malcolm X.

Reflecting on the Marable biography, I was struck by the capacity of people to change their ways of thinking, their ideologies, and their practice. Marable attributes some of Malcolm X’s development to his conscious desire to reinvent himself and to do so as he told his life story to Alex Haley, his autobiographical collaborator.

Despite the world of racism, repression, and theological rigidity Malcolm experienced, Marable records how Malcolm X’s experience and practical political work were in fact transforming.

Different people gleaned different things from reading Malcolm X’s autobiography, and the same is true of a reading of Manning Marable’s stirring and frank biography. While those of us on the left were most inspired by the last two years of Malcolm X’s life, my student was probably impacted as much by Malcolm’s developing sense of pride and self-worth in a society that demeaned and ridiculed people of color

Reading Malcolm and Marable reminds us that, while we bring change through our organizational affiliations, each individual can have a role to play in achieving that change. Not all of us can be Malcolm X, Che Guevara, Dolores Huerta, or Mother Jones. But we can make a difference.

In addition, Manning Marable makes a particularly strong case for Malcolm X as an internationalist. The United Nations had adopted a Declaration on Human Rights in 1948 but human rights discourse was not part of the language of international relations until Malcolm X demanded the international community address the issue.

For Malcolm X, United States racism, while violating the civil rights of its Black and Brown citizens, was also violating the fundamental human rights of peoples at home and abroad. At the time of his assassination, Malcolm X was working to build a coalition of largely former colonial states to demand that each and every country, and particularly the United States, respect the human rights of all peoples. Multiple problems including racism, poverty, disease, hunger, political repression, and sexual abuse were problems at the root of twentieth century human circumstance AND the United States was a major violator of human rights.

Marable describes in great detail Malcolm X’s frenetic travels through Africa and the Middle East to build a coalition of Black and Brown peoples to demand in the United Nations and every other political forum the establishment of human rights. Bombing Vietnamese people and killing Black children in Birmingham were part of the same problem.

And, this campaign was being launched at the very same time that the countries of the Global South were struggling to construct a non-aligned movement to retake the resources, wealth, and human dignity that had been stripped from peoples by colonialism, neocolonialism, and imperialism. This was the position that Dr. Martin Luther King came to in 1967, as articulated in his famous speech at Riverside Church in New York. Malcolm X was introducing this global human rights project in 1964.

Marable’s Malcolm X therefore transformed himself from a minor street hustler, to a Black Muslim, to a visible world leader advocating a global human rights agenda. This is the Malcolm X that has meant so much to us over the years, along with his insistence that Black and Brown people be accorded respect everywhere and that they should honor and respect themselves.

But, Marable carefully documents Malcolm X’s flaws as well as his strengths. He was anti-Semitic, misogynistic, not unsympathetic to violence, and a man engaged in intense, some times petty, political struggles with his organizational colleagues.

Manning Marable humanizes Malcolm X. Humanizing our heroes makes our efforts to pass the messages and symbols of the past to newer generations of activists more convincing. Young people do not need to see progressive heroes as untainted by their own humanity. And when we present those who make a contribution to building a better world to new generations, the examples of their flaws make it clear that no one is beyond personal and political redemption.

Finally, the biographer, Manning Marable, as my statement at the outset suggests, was a profoundly important scholar/activist. Marable used his historical knowledge, social scientific analytical skills, and political values to craft a career of writing and activism that impacted his students, his academic colleagues, and his fellow socialists in the struggle for a better world.