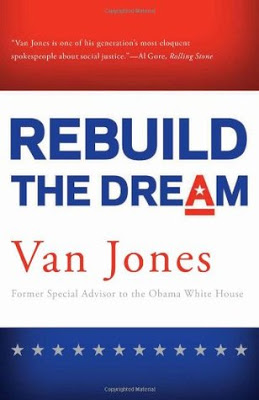 As election nears:
Van Jones on rebuilding the dream

Activists know that building mass movements entails a variety of cognitive and action steps. Sometimes it is useful for a skilled activist like Van Jones to provide us with a framework for discussing how to proceed.

The central argument of this book is that, to bring back hope and win change, we need more than a great president. We need a movement of millions of people, committed to fixing our democracy and rebuilding America’s economy.

In June, 2011, Van Jones, former White House advisor on Green Jobs and before that community organizer and author of The Green Collar Economy, called on progressives to organize house parties to establish a policy agenda that could serve as the basis for building a new progressive social movement. An inspiring speech to urge organizing at the grassroots level was widely distributed on the internet.

In July thousands of house parties, advertised as efforts to “Rebuild the American Dream,” were held. These were followed by electronic dialogue that led to the adoption of a “Contract for the American Dream;” a 10-point program for economic renewal. Over 300,000 Americans have endorsed the Contract, and the Rebuild the Dream coalition claims to have 600,000 members.

In some communities, including in Lafayette, Indiana, where I live and teach, local Rebuild the Dream Coalitions became the vehicle for networking among representatives of civil rights and civil liberties groups, trade unionists, defenders of women’s reproductive health, and progressive Democrats. Rallies, petition drives, and panel presentations were organized around jobs and justice, protecting Planned Parenthood, and challenges to the connection between big money and politics.

During the fall of 2011, overshadowing grassroots Dream coalition efforts, the Occupy Movement surfaced and spread all across the United States. Already dramatic fightbacks against anti-labor legislation in Wisconsin, Ohio, and Indiana had begun. Both the activism in the Heartland and in the occupations became more visible (and perhaps more influential).

Reflecting on the possibility of continuing the construction of a mass movement to revitalize democratic institutions and the economy, Jones has written a book assessing these campaigns (including the Obama electoral campaign which preceded them). Most important he presents a conceptual scheme for helping communities decide on appropriate political programs and activities.

Before addressing future needs, Jones makes the important point that the Occupy and Dream movements and the 2008 campaign around the Obama election followed a massive anti-Iraq war movement, new developments in internet organizing, and the construction of movement-oriented think tanks and cable television programs during the first decade of the new century. He believes that social movements build on the successes and failures of those that precede them.

During the first few chapters of Jones’ book, the author discusses strengths and weaknesses of the Obama administration. Among the positive contributions of the administration Jones refers to policies that averted another Great Depression, including saving of the auto industry. Jones applauds passage of the Ledbetter Act. On the negative side Jones discusses the failure of the administration to secure passage of the Employee Free Choice Act, an inadequate economic stimulus package, and weak efforts to regulate Wall Street financial institutions.

From a social movement standpoint Jones included in his critique the successful Democratic National Committee effort to accumulate the power that had been generated at the grassroots to elect Barack Obama. Organizing for America (OFA) groups, Jones wrote, which represented grassroots mobilizations everywhere, were taken over by the formal centralized Democratic Party machinery, thus defusing the energy, passion, and willingness of activists to work for a progressive agenda.

Beyond his review and analysis of 21st century social movements and the Obama campaign, a major theoretical contribution of the book is in its conceptual scheme. By using a 2 x 2 table Jones identifies two critical dimensions of movement building.

The first, involves whether campaigns are organized around rational analysis (thorough argumentation with the use of data and the making of specific proposals) or emotional appeals (referring to emotive symbols, slogans, and inspiring artistic creations).

The second dimension involves politics as conceptualization (generating ideas) or action. Action can be about the “inside game”(bargaining and negotiation, electoral work, lobbying), or politics as an “outside game” (engaging in street heat, mass mobilizations, rallies, and civil disobedience).

Jones calls the process of identifying policies through rigorous analysis as the “head space,” rallying public support through emotions the “heart space,” lobbying, pressure group politics and elections the “inside game,” and going to the streets the “outside game.” For him the political process involves the activation of all four quadrants at different points in time; using concepts and analysis or emotional appeals applied to inside or outside forms of action.

Sometimes the process moves in the order I have just laid out — from sober analysis and facts (Head Space), to resonant narratives that inspire support (Heart Space), to citizen participation (Outside Game), to official debate, deal making, and rule making (Inside Game). Sometimes it starts in the Heart Space with an impassioned call for change, which activists then pick up on a mass scale (Outside Game), which in turn catalyzes scholars and think tanks (Head Space), and ultimately leads to elected officials changing laws (Inside Game).

…each and every quadrant is the most important one at different stages in the process of making change (121).

The conceptual scheme offered by Van Jones may help grassroots coalitions strategize about their progressive agenda.

First, Jones is correct to argue that politics is about theoretical and policy discussion. Also, politics is about popular, accessible appeals to action. In addition, political activity concerns routinized political action, including the selection of leaders, pressuring them to act on the people’s behalf, and making them accountable. Furthermore, it is about extraordinary public action to demand that leaders defend the interests of the masses of the people (the 99 percent) or be ready to suffer punishment for their inside game decisions.

Second, grassroots organizations must decide, given their local, as well as the national, context where their energies need to be placed: developing theories and programs, generating emotive symbols to build mass support, working in elections and generating lobbying campaigns, and/or hitting the streets.

Third, these four dimensions of politics — head space, heart space, inside game, and outside game — are what progressives do. But often we do not reflect on what we are doing; what “stage” in the process of movement-building we are in; and what combination of dimensions — given our resources — should be part of our plan of work.

Fourth, all grassroots groups can sit down at a planning meeting, identify the quadrants, list the activities that have been carried out in each somewhere in the country, assess the situation of the local group, and develop a program that is feasible, given resources and local context, to achieve pre-articulated progressive goals.

Activists know that building mass movements entails a variety of cognitive and action steps. Sometimes it is useful for a skilled activist like Van Jones to provide us with a framework for discussing how to proceed. Rebuild the Dream does that. It would be a good resource for study group discussion.