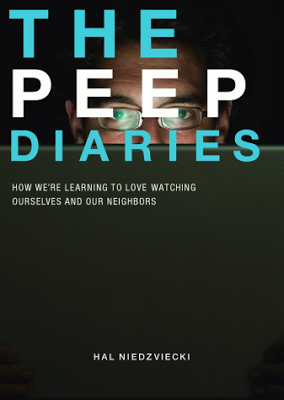 To Peep or Not to Peep? That is the Question

[The Peep Diaries: How We’re Learning to Love Watching Ourselves and Our Neighbors, by Hal Niedzviecki, City Lights.]

In 1953, the British historian, Isaiah Berlin wrote an essay entitled “The Hedgehog and the Fox” that made him famous the world over. Berlin argued that there were two fundamentally different kinds of thinkers. There were the hedgehogs of the world, and there were the foxes. The hedgehogs had, he explained, one dominant idea that informed everything they wrote about. The foxes knew a great many things, and were not satisfied to be identified with a single all-embracing idea.

Berlin didn’t originate the hedgehog and the fox concept. The ancient Greek poet Archilochus did thousands of years ago, but Berlin gave it currency in the 20th-century, and it caught on. So, Dante and Hegel are often grouped with the hedgehogs; Shakespeare and James Joyce with the foxes. If nothing else the hedgehog and the fox categories provide fodder for cocktail parties. An entrepreneurial fellow might create a Hedgehog and Fox Blog; everyone with email could join one group or another, or put their friends in a category.

Hal Niedzviecki would probably be found among the hedgehogs. In true hedgehog fashion, he finds a single idea and holds on to it tenaciously. He sees everything and everyone through the lens of that one idea. In his new book, The Peep Diaries the hedgehog idea is right there in the subtitle: “How We’re Learning to Love Watching Ourselves and Our Neighbors.” Niedzviecki hammers away at his idea for more than two hundred pages, and if somehow you’ve missed it in the subtitle he repeats it in the book itself. “We’re all learning to love watching ourselves and our neighbors,” he says in chapter one.

Much of what Niedzviecki says is obvious. Everyone reading this online, as you’re doing now, already knows most if not all of what he has to say. “More than ever we’re putting everything on line,” Niedzviecki writes. Gee! He adds, “it’s getting harder and harder to keep a secret.” Wow! A bit further on he writes, “In the age of Peep, everyone wants to know everything (and everyone wants everyone else to know everything) about who they are, why they are, and how they are.” What will he think of next? Still further on he observes, “Peep culture is our (admittedly twisted) answer to the problem of the dehumanizing of humanity.”

Aha! “The dehumanizing of humanity.” Now, there’s a big theme that nearly every college sophomore has written about in a term paper for the last 50 years. I know I did, and so did many of my classmates. Sophomores are still writing essays on that subject. Much of what Niedzviecki says is trite, clichéd, and dare I say it, muddleheaded.

Perhaps the main problem I have is with the word “Love” in the subtitle – as in “how we’re learning to love watching ourselves and our neighbors.” Now, I know that advertising and public relations persuade masses of people to love things – like Wendy’s hamburgers – and people – like Brad Pitt – so that we consume them in one way or another. But as a teacher at a public university in California I also know that my students do not love the loss of their privacy. Yes, they email and Blog and take photos of themselves and their friends and post them. That is true. But they also dislike invasions of their privacy, and indeed feel that they have a right to it. They don’t want anyone to follow them in the bathroom and watch them poop or pee.

Some of them are willing to fight to preserve their privacy. I know. I teach a class that focuses on privacy issues. In a recent moot court we held in class the students were all on the side of the citizens whose privacy was violated, and against the media that invaded it. When I told them that our college president had surgery to shrink the size of his stomach, and that he had lost 100 pounds they insisted that wasn’t news, and that they’d never print it in the campus newspaper.

I disagreed. If Derek Jeter’s hands and Alex Rodriguez’s knees are news, the college president’s stomach is news, too. He’s getting paid $150,000 a year, and I want to know if he’s healthy or not and able to do his job.

I have always liked gossip, and I like to gossip. I have gossiped about Tom Hayden, Jane Fonda, Jessica Mitford, Jake and Maggie Gyllenhaal, the son and daughter of my friends, Naomi and Stephen Gyllenhaal, who produced Homegrown, the marijuana movie I wrote, and who made everyone who worked on the movie sign a contract saying that they would not do drugs during production. Sometimes there is more news in so-called gossip then in hard news stories. Whenever I hear juicy gossip I email friends. I tell the world. I have largely lived a transparent life ever since I wrote my autobiography Out of the Whale in 1974. I recommend transparency – though Niedzviecki mostly doesn’t. Come out and play, I say.

Privacy is also a very strange thing. In many ways it’s hard to lose it, no matter how hard you try because the context is all-important. When I tell students in a crowded lecture hall that I dropped acid and rioted in the streets in the 1970s it doesn’t mean much if anything to them, and I don’t feel that I have lost my privacy, whatever that is. The students weren’t there, then. They don’t know that historical moment and what it meant. They don’t get it. So, I’m as private as I ever was.

Near the end of The Peep Diaries, Niedzviecki writes that when he began his book he wasn’t sure if he’d end it on a note of “pro or anti-Peep.” When he did reach the end, he says, he was “as undecided as ever” and that he still didn’t know where he stands. “Do I install every possible privacy protection on my computer? Do I track my friends and let them track me?” He does say that he has come to one strong, definite conclusion: he won’t put a picture of his daughter on his blog. And he won’t mention her name online, either.

“That’s about the only thing I’m absolutely sure about when it comes to Peep,” he writes. On his website he writes, “Hey, I’m Hal Niedzviecki. I’m a 37 year-old writer/thinker. I live in Toronto, Ontario, Canada with my wife and two-and-a-half year-old.” In a way he has already exposed his daughter. We know she exists; we know her age, we know who her father is. Writing about oneself, one automatically and inevitably writes about others. It is impossible, or nearly so, not to out friends and family if we are writers. It comes with the territory.

Niedzviecki’s book begins to become interesting at the very end when he gets beyond glib phrases like the “dehumanizing of humanity,” and writes about himself, his wife and his daughter. This book could use more candor and more disclosure; make it more like a diary, Hal, and less like a dissertation. The book could also benefit from an insightful comment made by F. Scott Fitzgerald, the author of The Great Gatsby. Fitzgerald had a better idea, I think, than Isaiah Berlin’s hedgehogs and foxes. “The test of a first-rate intelligence,” Fitzgerald wrote, “is the ability to hold two opposed ideas at the same time, and still retain the ability to function.” Perhaps if Niedzviecki had started The Peep Diaries by disclosing his duality about “the culture of peep” it would have made for more compelling reading. It would certainly have made the book far more of a human document. After all, the essential humanity of the author is what matters most of all.

[Find Hal Niedzviecki’s The Peep Diaries: How We’re Learning to Love Watching Ourselves and Our Neighbors at City Lights.]

2 Responses to BOOKS / Jonah Raskin on The Peep Diaries