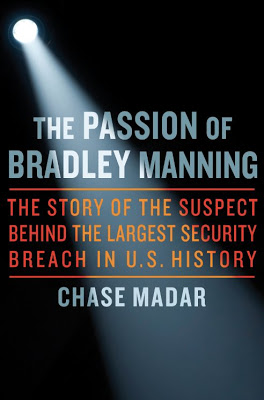 Rules are rules as any fool can see:
‘The Passion of Bradley Manning’

[The Passion of Bradley Manning: The Story of the Suspect Behind the Largest Security Breach in U.S. History by Chase Madar (2012: OR Books); Paperback; 190 pp.; $15.]

I remember the very first time I saw the Wikileaks-released video filmed from a U.S. gunship showing the murder of a dozen unarmed civilians including two journalists. The video proved the true brutality of the U.S. occupation of Iraq and the distressing disregard for human life common among U.S. soldiers.

Sadly, I wasn’t shocked or surprised at what I saw. Even after having heard about such incidents in conversations with returning veterans, the visual evidence was still quite disturbing to watch.

That video was the first time most Americans had heard about Wikileaks. Not long after, the name of Bradley Manning also entered the U.S. consciousness. He would be accused of releasing that video and thousands of other documents relating to the U.S. wars on Iraq and Afghanistan, along with thousands of diplomatic cables describing in oftentimes explicit detail the crimes and morally questionable actions and words of Washington officials.

Soon, Mr. Manning would be charged with treason and aiding the enemy (among other charges) for his actions. He is currently on trial in a U.S. military court located at Fort Meade, MD. and faces life imprisonment. It is my belief that only an immense and broad popular movement could possibly change that fate.

Bradley Manning’s decision and the subsequent reaction is the subject of a newly published book by civil rights attorney and commentator Chase Madar. This book, titled The Passion of Bradley Manning: The Story of the Suspect Behind the Largest Security Breach in U.S. History, presents Manning’s decision in the context it was meant to be understood: as a political act by a man who saw his duty to humanity to be greater than his orders to protect the Pentagon and politicians that sent him and thousands of other GIs to war.

Madar attacks the very system of secrecy Manning is charged with violating. He details the overzealous use of secret and top secret classifications by government officials, calling it a “tragic, bloated farce.” He questions the use of the Espionage Act to charge Manning and other men whose actions are not about aiding the enemy, but about exposing the misdeeds of the U.S. government.

What did the documents Manning sent to Wikileaks contain? While it is impossible to even begin to summarize the millions of words in those documents in the brief space of Madar’s text, he does list the basics of some of the content.

The documents showed a brutal pacification campaign in Afghanistan where civilian deaths were all too common and sometimes intentional. They acknowledged massive civilian casualties from U.S. fire in Iraq and detailed Washington’s retail diplomacy with the Vatican hoping to convince the Holy See to call the U.S. wars just.

In other areas, the diplomatic cables exposed the role of the U.S. Embassy in Haiti in fighting attempts to raise the minimum wage there to 61 cents an hour and U.S. complicity in covering up Israeli atrocities in Gaza.

Yet, despite the revelations they contained, the U.S. government has been unable to prove that the leaks harmed any individual. Unfortunately, neither have they changed the essence of U.S. policy.

After acknowledging this, Madar writes about two leaks that probably did matter. One was a 1968 leak by Daniel Ellsberg to presidential candidate Robert F. Kennedy that detailed the Johnson administration’s plans to expand the U.S. war to Laos and Cambodia. The leak and Kennedy’s revealing it probably prevented that expansion under LBJ. Of course, Nixon wasted little time in doing exactly what Johnson didn’t do.

Another more recent example occurred in 2003 when the national intelligence assessment of Iran’s nuclear weapons capability was leaked. This document stated clearly that Iran had no nuclear weapons and was not building any at the time. That leak probably prevented the U.S. from attacking Iran.

Like it or not, since his arrest Manning’s treatment has been shameful. His imprisonment, which includes solitary confinement and forced nakedness, is nothing short of torture. Indeed it has been condemned as such by the German Bundestag and several other individuals in European governments and even some high ranking U.S. officials.

Madar’s discussion of Manning’s treatment is revealing and likely to garner a number of denials by liberals and neocons in the halls of power. This is especially true when he argues against the view promulgated by U.S. liberals that the treatment is an aberration.

The fact is, writes Madar, the abuses experienced by Manning and by prisoners in U.S.-run prisons in Guantanamo Bay, Iraq, and Afghanistan are also commonplace in U.S. prisons. Furthermore, torture is a common occurrence in U.S. jails at all levels of the penal system.

In the early 1970s Kris Kristofferson recorded a song whose chorus includes the lines, “The law is for protection of the people/ Rules are rules as any fool can see…” The song proceeds to show the use of this maxim by the powers that be to lock up those that disrupt their rule. The sarcasm of the lyrics continues, pointing out how laws are not only applied unequally, but are often written only to protect the wealthy and powerful. If Kris Kristofferson were to add a verse to his tune in 2012, it could be about Bradley Manning.

When pressed to explain the charges arrayed against Manning, the reason given most often is that he broke the rules regarding classified information and that is reason enough. As Madar points out over and over in his book, these rules are broken quite often by government officials in the pursuit of certain policies and those violations are rarely challenged.

Furthermore, and considerably more appalling, is the reality that the atrocities and diplomatic maneuverings revealed in the documents Manning released are not illegal. Why? Simply put, because the laws are written by the warmakers and profiteers. So, those who reveal the machinations of the powerful are more likely to go to prison than those who kill, torture, bribe, and steal in the name of empire.

Simultaneously an indictment of a government obsessed with secrecy and a nation addicted to war, The Passion of Bradley Manning is also a concise and clear explanation of who Bradley Manning is. It explains why he risked his life and future by committing the overtly political act of exposing his government’s crimes and lies.