BOOKS / Ron Jacobs : ‘We Are Many’ Offers Thoughtful Analysis of Occupy Movement 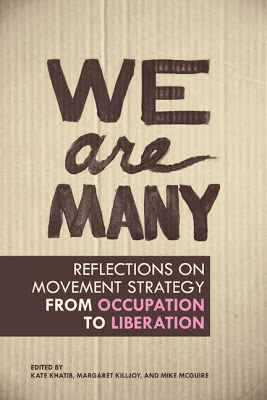 From occupation to liberation:
A review of ‘We Are Many’

This aesthetically pleasing volume has the best overall take to date on the meaning of Occupy, its shortcomings and strengths, and its potential future.

[We Are Many: Reflections on Movement Strategy from Occupation to Liberation, edited by Kate Khatib, Margaret Killjoy, and Mike McGuire; Afterword by David Graeber (2012: AK Press); Paperback; 355 pp; $21.]

Despite a myriad of obituaries for the movement that began in Manhattan in September 2011, the people of Occupy refuse to let it die.

There are hundreds involved in the Occupy Sandy effort in the New York City region following the devastation of Tropical Storm Sandy. Individuals and groups connected to Occupy Wall Street have organized relief efforts that are feeding and caring for thousands of people left without power, work, and homes.

Those being helped are primarily the working poor and folks on assistance. They are also those traditional relief efforts tend to ignore, precisely because of their income status and, in the USA, also perhaps because of their skin tone or ethnic origin.

The vastness of the Occupy Sandy effort is testament to the Occupy movement’s most obvious strength: its ability to organize rapidly and from the ground up.

Since the advent of Occupy and the demise of its encampments, there have been millions of words written about the movement. From Fox News to the Revolutionary Communist Party’s journal Revolution; from Le Monde to the Jerusalem Post; and numerous journals, websites, blogs and television networks, Occupy Wall Street and the movement it spawned provoked a storm of commentary.

Some of it was sensationalist and some of it perhaps overly academic. It was occasionally overly laudatory and often overly critical. Overall, however, the press coverage did something that one could argue no left-leaning movement since the 1960s and 1970s had done. It changed the nature of the national conversation.

Like the black liberation and antiwar movement of those decades long past changed the way mainstream America thought about the treatment of African Americans and the nature of its foreign policy, Occupy changed the way mainstream America thought about its economic system. Or, maybe it just vocalized thoughts people had held but did not know how to vocalize in a way that would draw some attention.

A year later there have been a number of column inches written about Occupy and its meaning. The articles written in the mainstream press tend to acknowledge Occupy’s influence in the national conversation. At the same time, these articles tend to diminish its long term role. Perhaps because it is too early to tell. Perhaps because they hope it doesn’t have one.

Occupy was the greatest manifestation of anti-authoritarian organizing in the United States in recent history. It proved that spontaneity can work. The taking of property and occupying it is a radical act in itself and obviously one the powers that be find threatening.

The involvement of the houseless was and is important. Their presence and involvement not only made the gross shortcomings of monopoly capitalism real, they also provided food and a reaffirmation of value to those on the streets and an experience at self organizing for all. Yet, it suffered from some of the same ills present in the larger society: racism, sexis, and questions around violence and leadership.

Occupy was/is not a movement that began with highly defined politics. This was its strength and its weakness. Many different philosophies set up camp under its banner. Anarchists, socialists, libertarians, and liberals. Even the occasional tea partier and Democrat.

Yet, despite this multitude of philosophies that came to share the Occupy camps, the one that was its impetus remains a generally defined type of left anarchism. Somewhat situationist like the poster artists of Paris in May 1968 while also derivative of the squatters’ movement of the 1970s and 1980s in Europe, Occupy also drew from the anarchism of the Yippies, the counterculture of the 1960s, and the punk culture that came later. Therefore, it would seem that the best analysis of Occupy would come from folks that had similar roots.

Guess what? The best analysis of Occupy does come from such folks. Titled We Are Many: Reflections on Movement Strategy from Occupation to Liberation and published by AK Press, this aesthetically pleasing volume has the best overall take to date on the meaning of Occupy, its shortcomings and strengths, and its potential future.

Unlike earlier books about Occupy, most of which were published either during the life of the encampments or immediately after, We Are Many has the perspective a little time often provides. Away from the intensity of battles with police and the day-to-day reality of camping in the middle of some urban space, this book presents the reader with thoughtful essays designed to raise questions about strategy and politics that might have been pushed aside in the aforementioned day-to-day reality.

Earlier writings about Occupy were often chronicles of organizing; sometimes those chronicles were objective attempts to describe the daily life of the writer and those around them; other times they were impressionistic attempts to do the same thing.

We Are Many has its share of these essays, yet even those indicate a deeper reflection and understanding of Occupy’s historical meaning and the potential it unleashed for the future of oppositional and extra-parliamentary movements, especially in the United States.

Writers who appear in this volume include some names fairly well known in anti-authoritarian and left circles: Cindy Milstein, Vijay Prashad, Frances Fox Piven, Andy Cornell, David Graeber, George Cicciariello-Maher, and the Crimethinc Collective, to name just a few. This list is a small representation of the more than 50 writers and artists collected here.

AK Press has done a great service by publishing them together in this volume. Like so many of the publications released by this collective, not only is this book filled with good, thoughtful writing and great art, it is attractively presented. These writers take a hard look at manifestations of racism and sexism in the movement; they discuss the nature of violence and its role in popular movements; and they discuss these and other questions from a perspective that represents the grassroots democratic and anti-capitalist philosophy that motivated the movement.

We do not know what will happen next with the movement awakened by that first presence in lower Manhattan back in the autumn of 2011. In Europe, general strikes and daily protests continue to occur as neoliberal capitalism takes its ransom from governments across the continent. In the Middle East and Central Asia, wars continue to flare and military occupations continue to be challenged.

In North America, the corporate and financial elites continue to ravish the economy and politicians conspire to destroy the remaining social welfare and retirement systems previous generations fought hard to build. WalMart workers are organizing unions and Quebec students fought against university privatization moves and won.

It is not the end of the battle, but the beginning. Onward.