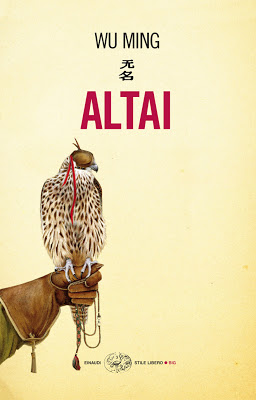 The reader is propelled into a tale of spies for and against the Church; of bloody feuds between armies of the Church and peasant rebels; and of communities organized along principles we would now call communist.

The Middle Ages might not seem like an exciting period of human endeavor, even to historians. Popes, politics, and peasants are all one hears about in those survey courses taken in high school and college. The potential for intrigue and revolution seems remote and unlikely.

Wu Ming, the Italian author collective that originally wrote under the namd “Luther Bissett,” have done a masterful job dispelling that perception. The group’s novels Q and the newly translated Altai, not only bring this era alive, they dispel the perception mentioned above.

Q, the first novel in this duo opens in the years after Martin Luther attached his theses to that door in Wittenberg, Saxony. Immediately the reader is propelled into a tale of spies for and against the Church; of bloody feuds between armies of the Church and peasant rebels resentful of the Church’s submission of them; and of communities (indeed entire cities) organized along principles we would now call communist.

It is these communities that gain the wrath of everyone in power: the Holy Roman Empire and the Protestant establishment led by a wealthy class of merchants that is resentful of both the Church and nobility. Furthermore, this new class is also fearful of an enlightened peasantry and laboring class. Perhaps the most famous and most revolutionary of all those communities was the town of Münster, whose revolutionaries were led and inspired by Thomas Muntzer, John of Leiden, and the philosophy now known as Anabaptism.

In the pages of Q, Wu Ming renders in fictional form the Marxian position that the Peasant Wars of the period were not just about religion. In fact, as Marx makes clear, they were against feudal oppression and land — always an essential element of every peasant and worker rebellion throughout history.

Q is the nom de guerre of a spy for the Vatican. El Alemain is the Anabaptist rebel who takes part in numerous battles against the powerful, works to disseminate anti-Catholic and democratic literature, conspires with enemies of the Church, and ultimately disappears only to turn up in Constantinople still on the run.

He is the character that ties the two books together. After disappearing at the end of Q, he shows up in the Constantinople of Altai ready to take on the Church once again. The more encompassing connection is the history.

The story begins in Germany with the book Q. With Martin Luther’s reformation well underway, those who feel that Luther’s demands have not gone far enough are setting up their own communities. Many of these communities are essentially communist and opposed not only to the hierarchy of the Catholic Church, but to the demands of the aristocracy and even the new Protestant gentry and early bourgeoisie.

In essence, these communities are mutual aid societies that take the anti-monetary elements of Christianity and make them the centerpiece of their gospel. There is no place in Europe where the sentiment is greater than in Münster, Germany.

Wu Ming explores this combination of cause and effect in the novels Q and the just released Altai. It is another spy who narrates the sequel Altai. A converted Jew working for the Church in Venice, he is falsely accused of sabotage and escapes. As it turns out, those who aid his escape have their own agendas. Although he rejects those agendas at first, he soon realizes that he agrees with them more than he disagrees.

After arriving in Constantinople he rediscovers his Jewish faith and fate, allying himself with another Jewish exile from the Holy Roman Empire. Together they plan a strategy they hope will create a refuge for all of those persecuted by the Church. In the process, Wu Ming raises issues of sexuality, power, freedom, and the problem of war.

As the description of the final battle for Cyprus and the desolation resulting from the Ottoman siege in Altai makes obvious, these are antiwar novels as much as they are adventure stories and fictional depictions of history. The desolation and sheer butchery is graphic and disturbing; enough to make almost any reader question the use of violence to achieve a worthwhile end.

The members of Wu Ming are master storytellers. Their ability to weave together their individual narratives and their tales into a complete novel (let alone two) is a marvel. The fact that the completed tale is so much more than its individual parts is testimony to their craft and their artistry.

As a writer, I remain intrigued and mystified by Wu Ming’s process and astounded by the result.