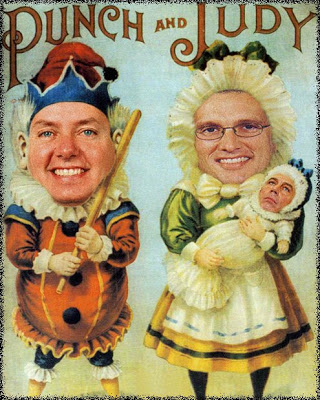 Cable TV news and commentary channels seem to make little distinction between featuring a live two-headed mule on their shows or a live falsehood-spouting politician.

This has been a boon, especially to angry deluded and ignored Bush-era Republicans. They still do not want to admit that the only way to fight rising joblessness is for the US Government to spend lots of cash, in a hurry. Even though they have no moral right to lecture America after the past eight disastrous years, they loudly repeat the old disproved arguments that tax cuts and tax credits alone will solve our growing problems. The truth or logic of what they say matters little. Their show must go on, for re-elections are not far off.

Lovable Lindsey Graham, South Carolina’s bachelor Senator who is disliked not only by liberal progressives, but also by ultraconservatives back in his home state, has a way with words. When he uttered, on live TV, “If I may say, if this is going to be bipartisanship, the country’s screwed,” there were looks of puzzlement and incredulity. His House minority party voted against the stimulus bill. That’s what opposition parties do. But America is not “screwed” to use Lindsey’s eloquent oratory, just because the Republicans marched in lock step with their No vote. They offered no new or remotely useful alternatives to help reverse the course of the deepening recession. The lack of help from impotent Republicans in an historic time of crisis caused no screwing whatsoever . . . of America or anything else.

Virginia’s Representative and Minority Whip, Eric Cantor, the only Jewish Republican in the US House of Representatives, is being touted as a latter day Newt Gingrich. Cantor has been all over the airwaves with his authoritative, stentorian monologue, kvetching about the fatal flaws in the Democrat’s stimulus bill. It is mostly so much hysterical bull. Cantor, performing on Fox News a few weeks ago, gave one of his examples of fraud and waste, recounting that in a meeting with President Obama, he asked if the President “could use his influence on this process to try and get the pork barrel spending out of the bill. I mean, there’s $300,000 for a sculpture garden in Miami.”

What a ghastly picture of utter waste . . . on art! Except it was totally false. Cantor staffers pulled an example of a National Endowment for the Arts project funded under its budget last year then said it was in the projected stimulus bill. It is not. Even after Politifact.com awarded Cantor a “Pants on Fire” false rating for his claim, he has continued to make it repeatedly. But he puts on a real righteous show for TV. Never matter it is tacky Punch and Judy drama.

And let’s not forget TV’s crying soap opera star, Senator John Boehner. Even his own party seems to be trying to lower the Minority Leader’s profile on TV after repeated gaffes. A master of the mis-quote, Boehner announced, “Israel is a critical American ally and a beacon of democracy in the Middle East, not a ‘constant sore’ as Barack Obama claims.”

Well, President Obama said no such thing. The ‘constant sore’ reference was to the entire problematic Middle East situation. The public should still have that image of Boehner, like a jolly Punch character, actually handing out checks from the tobacco industry on the House floor. Yet he would lecture the new President.

Cable TV news and commentary channels seem to make little distinction between featuring a live two-headed mule on their shows or a live falsehood-spouting politician. Both can astound, disgust and amaze viewers. But the mule cannot talk. However, it can bray just like politicians. More and more, the off button on the TV remote seems the best choice.

1 Response to Cable TV : A Republican Punch and Judy Show