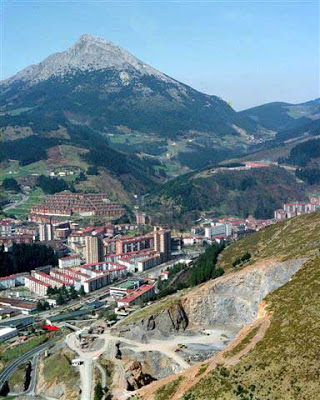 BASQUE COUNTRY, Spain — Most new small businesses fail. That’s a fact, whether they are in the Basque Country or in the U.S. Or anywhere else. Yet the Mondragon Coops, which all started as small worker-owned businesses, have hardly ever failed. Why? The key is in Father Jose Maria Arizmendi’s original founding conception of cooperatives as the interlocking of school, factory, and credit union.

This was the thought I was rolling over in my mind as our bus again climbed the slopes on the Arrasate-Mondragon valley, this morning with grey skies and a light drizzle. We were headed for an administrative office of Caja Laboral, the worker-owned banking network of the MCC Coops. The ride wasn’t far, and we were soon whisked into a small auditorium. Our mentor, Mikel, introduced the staff member who would introduce us to the world of banking, and Mondragon’s modification of one corner of that reality.

Some people might question why workers for social change would want to be involved with banks at all. But certain kinds of credit and finance are important components of any society — capitalist, socialist, or somewhere in between.

Father’s Arizmendi’s conclusion that two of the many reasons cooperative movements failed in the past was the lack of reliable credit and the lack of innovation and new ideas. Hence the reason he started with a school, but was soon to add a small credit union formed from the small deposits of his parishioners and their neighbors. To start a factory, you had to borrow some money, and borrowing the money of people close to you at low cost was the best way to go.

By 1959, the small credit union had grown and transformed into Caja Laboral. Today it is one of the major banks in Spain, with assets of 21 billion euros and 1.5 billion in equity. It has 18.6 billion in customer deposits, offset by 16.4 billion in credit loans. It has 1,2 million clients, only 120 of which are the MCC coops.

It has 2,000 people working for it, and all are worker-owners. Actually, the bank is owned 55% by the MCC coops and 45% by the staff workers. But the rule they have adopted is that the factory coops pick eight of the board members, while the staff workers elect four. Since Caja Laboral, is a coop of coops, it is what MCC calls a “second degree” coop. Other second degree coops are their schools, medical clinics, and insurance agencies.

“We are rated the best bank in Spain in customer satisfaction,” says our presenter. “One reason is that we are worker-owners ourselves, and not socially distant from them. We work closely with our clients. We are prudent and conservative

Mikel gave a wry laugh from the back of the room, and interjected: “Except for the Lehman Brothers fiasco…” It turns out Caja Laboral had taken a hit of 160 million euros it had tied up in Lehman Brothers securities when the Wall Street investment bank collapsed at the beginning of the financial crisis two years back. Not only had MCC’s bank been hurt, but

“Yes,” said our presenter. “But we followed our rule of transparency. You and everyone else knew it the same day, and we announced it to the press the next morning.”

This opened up a discussion among all of us on the proper role of banking and credit unions, including cooperative ones. It’s not a subject progressive activists are all that familiar with, but we had it anyway.

First it was clear that Caja Laboral‘s big sin in the Lehman Brothers case was believing in the validity of the AAA ratings of its securities, set by U.S. Government agencies, which turned out to be a sham. Second, it was also clear from the numbers presented that Caja Laboral was really something on the order of a strong and relatively cash-rich savings and loan operation and consumer services bank. Its managers didn’t get rich, but had incomes within the same narrow and modest salary spread as all MCC coop members. Its profits were plowed back in to building new coops.

It was not in the same league as the giant Wall Street speculators in derivatives, with their billion dollar bonuses, who were trying to gain wealth not by creating new wealth, but by pure gambling with other people’s money.

Most of us concluded that Caja Laboral was a sound and necessary part of MCC and its growth, but the arguments continued out the door and on the bus ride further up the mountainside to our next talk at the Otalora conference center.

Here we had a new topic, the training of governing boards of the coops. It did no good to elect workers to coop governing boards, and then just let them sink or swim. A skills transfer and training program was in order.

Our presenter was Juan Ignacio Aitpunea. He was a well-seasoned and tough-minded older Basque worker with strong cooperative values in his heart.

“We use a Basque word, ORDEZKARI, for our program,” he started off. “It means ‘representative,’ because that’s the task of the boards, to represent the workers. Our boards are elected to four-year terms, but we stagger them. Every two years, only 50% change, but with 120 coops, that means we have about 1,000 new board members to train every two years.

“We do it in steps. In the first six months, we get the new people to do self-evaluations, to find out their competencies, or the lack of them, so we know what to stress over the next year or so.

What were the skills needed?

“First,” Juan continued, “you have to know the basics, the laws on cooperatives and the functions of coop leaders. Second, you need common skills — teamwork, how to communicate, how to lead, how to make timely decisions. Third, you have to know how to design and work through a followup plan.”

All this was crucial because the governing board not only shaped policy, it hired and fired managers. Worker-owners, by their nature, cannot be fired. Over 50 years there was only one case, where a small group got caught embezzling.

Juan went into more detail on this, but our crew had other questions: how were people nominated, and what was involved in running?

First, if there are two vacancies, there must be at least three candidates, he explained. Any worker could volunteer to run, but he or she had to get signatures of 10% of the workforce. Next, the workplace’s social council, which serves some of the functions of a trade union, could suggest a candidate. Finally the old board could name one new candidate itself. But an initial vote was taken so each of the final minimum of three candidates to get a 50% minimum, then the vote was held to determine the final two.

“We need this to make sure board members have a wide respect throughout the workplace,” Juan added. “This is especially important in hard times, like now, when hard decisions often have to be made.” This meant firing the temp workers or cutting salaries to deal with the downturns.

“Leading is not just about friendship, or making friends. This is not mainly a place for that. But it is a great school where you can learn what it means to be responsible. You may also make a few new friends. In fact, in tough times, that’s when you can make the best and truest friends.”

Juan also stressed the need for diversity and the need to bring forward younger leaders. “When you get old like me, you get too used to having your own way. A time comes when you need to let new people in, but still find other ways to make a contribution.” 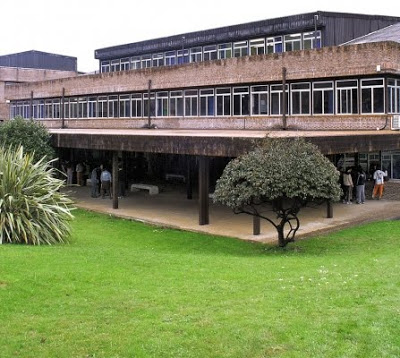 Mondragon University. Image from Universidad.es.
Our last stop of the day was Mondragon University. It was formed as a second degree coop by joining the engineering school, the business studies program, and the humanities and pedagogy teaching coop. It currently has about 3,600 full time students. Tuition is about 5,000 euros a year, considered moderate for a European university. Most of the students are from middle-income families in the area or from the workers in the coops.

Fred Freundlich was our faculty presenter, an American who had been in the coop movement in the U.S. in the 1980s, but had lived in the Basque County for a good number of years. He gave frank and critical answers to our questions.

I raised my hand, and asked: “Suppose I’m a young worker in one of the local industrial coops, and I decide I want to become part of the management. How does MU help me? Do they?”

The short answer was, “Yes.” But Fred added that management usually required a college degree, and you didn’t necessarily need to get it from MU. If you had a good resume and vita from elsewhere, you’d still be considered. On the other hand, if your coop saw that you were eager to gain new skills, they would give you a good deal of support, including financial, and going through MU for your degree would be a plus.”

Others raised the general question of activism among youth.

Frankly, Basque youth aren’t all that active inside the coops. They’re into third world global justice issues, environmentalism in general, and Basque nationalism. About the coop managers, I’d say a strong minority, maybe 30 percent, have solid cooperative values at heart, another minority pays lip service to them, and the rest are somewhere in between. We clearly need a new surge of activism to spread cooperativism beyond the factories, but my guess is only about 30 percent of the workers today are activists on the matter. You really need to talk more with Mikel, who’s really a leader on this topic.

Mikel went up front and drew us a wave-like graph, showing an initial surge in the early MCC decades, then a leveling off, then a dip at the beginning of the crisis, and now a small upward turn.

“This is the beginning of a rich discussion, how we need to redefine and reinvent ourselves for the 21st century? But the bus is waiting to take us to dinner in San Sebastian. We can return to it tomorrow.”