Carl Davidson : Shameless Republicans and the State of the Union 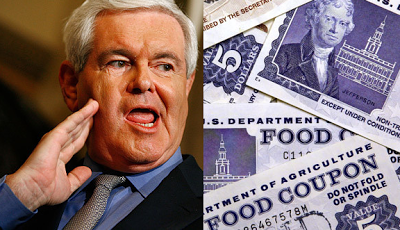 Newt and the “Food Stamp President.” Image from The Economist / Keep on Keepin’ On!
We’re all in the same boat?
On the topic of Obama, the
GOP can’t even blush anymore

If Hollywood gave Oscars for shamelessness, the Republican responses to President Obama’s State of the Union speech last night, Tuesday, January 24, would have swept the field.

“No feature of the Obama presidency has been sadder than its constant efforts to divide us, to curry favor with some Americans by castigating others,” he said. “As in previous moments of national danger, we Americans are all in the same boat.”

Amazing. One top GOP candidate, Newt Gingrich, is running around the country attacking Obama as the “Food Stamp President,” while the other, Mitt Romney, whose newly released tax returns show he takes in more in a day than a well-paid worker does in a year, critiques Obama’s business skills using a shuttered factory as a stage prop.

Obama, of course, never shut down a single factory, yet that was precisely the business Mitt Romney — and his outfit, Bain Capital — was famous for, including shutting down a factory in Florida, where his video message was being recorded.

“All in the same boat” and “castigating others” indeed. Governor Daniels uttered these words as the state he presides over is currently engaged in a notorious “right-to-work-for-less” battle to strip Indiana’s workers of their ability to bargain collectively.

Like many Americans, I watched the President’s speech with a critical eye. As he detailed a number of manufacturing and alternative energy industrial policies, I thought, finally, he’s giving some voice to his “inner Keynesian” and forcing a crack in the neoliberal hegemony at the top. I cheered when he took aim at Wall Street and declared, “No more bailouts, no more handouts, and no more cop outs.”

On the other hand I winced more than once at the glorification of militarism and the defense of Empire — I’m one quick to oppose unjust wars and who has long believed a clean energy/green manufacturing industrial policy needs to trump a military-hydrocarbon industrial policy.

This speech was also Obama in campaign mode. One thing we’ve learned over the last four years is that his governing mode is not the same thing, and requires much more of us in terms of independent, popular, and democratic power at the base to make good things happen.

But one thing is clear. My critical eye has nothing in common with what’s coming from the GOP and the far right. The first Saturday of every month, the pickup trucks from the local hills and hollows, growing numbers of them, fill the parking lot of the church on my corner, picking up packages from the food pantry to help make ends meet.

In these circumstances and lacking better practical choices, I’ll go with the “Food Stamp President” any day of the week.

[Carl Davidson is a national co-chair of the Committees of Correspondence for Democracy and Socialism, a national board member of Solidarity Economy Network, a writer for Beaver County Blue, the website of PA’s 4th CD Progressive Democrats of America, and a member of Steelworkers Associates. He is the author of several books, including New Paths to Socialism, available online. In the 1960s, he was a national leader of SDS and a writer and editor for the Guardian newsweekly. This article was also published at Carl’s blog, Keep On Keepin’ On!. Read more articles by Carl Davidson on The Rag Blog.]