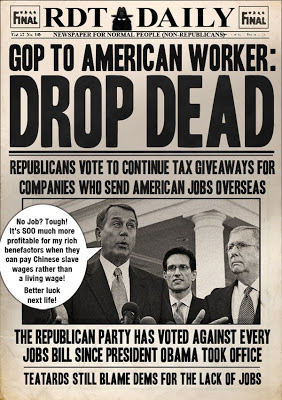 Art from RepublicanDirtyTricks.com / Keep on Keepin’ On.
Talk about your ‘class warfare’:
Shameless opposition to jobs bill
reveals GOP hatred of working class

If you want to have your class consciousness raised a few notches, all you have to do over the next few weeks is listen to the Republicans in Congress offer up their shameless commentary rejecting Presidents Obama’s jobs bill.

Last week’s doozy came from Texas Congressman Louie Gohmert, who was outraged that capitalists were being restricted from discriminating in hiring the unemployed, in favor of only hiring people who already had jobs elsewhere. I kid you not. Here’s the quote:

“We’re adding in this bill a new protected class called ‘unemployed,'” Gohmert declared in the House Sept. 13, 2011. “I think this will help trial lawyers who are not having enough work. We heard from our friends across the aisle, 14 million people out of work — that’s 14 million new clients.”

One hardly knows were to begin.

First, the Jobs Bill does no such thing as creating a “new protected class.” It only curbs a wrongly discriminatory practice.

Second, so what if it did? Americans who uphold the Constitution, the 14th Amendment’s equal protection clause, and the expansion of democracy and the franchise generally, will see the creation of “protected classes” as hard-won progressive steps forward from the times of the Divine Right of Kings.

Third, if Gohmert had any first-hand knowledge of the unemployed, he’d know they usually can’t afford lawyers, especially when the courts are stacked against them.

Fourth, to create even more confusion, Gohmert raced to the House clerk to submit his own “Jobs Bill” before Obama’s, but with a similar name. Its content was a hastily scribbled two-page screed consisting of nothing but cuts in corporate taxes.

What’s really going on here is becoming clearer every day. The GOP cares about one thing: destroying Obama’s presidency regardless of the cost. They don’t even care if its hurts capitalism’s own interests briefly, not to mention damaging the well being of everyone else. Luckily, Obama is finally calling them out in public — although far too politely for my taste.

The irony will likely emerge if and when they ever do take Obama down. I’d bet good money that a good number of the GOP bigwigs would then turn on a dime and support many of the same measures they’re now opposing.

But most of them, especially on the far right, would still likely press on with their real aim, a full-throated neoliberal reactionary thrust that repeals the Great Society’s Medicaid and Medicare, the New Deal’s Social Security and Wagner Act, and every progressive measure in between.

Their idea of making the U.S. labor market “competitive” and U.S. business “confident” is to make the whole country more like Texas, with its record volume of minimum wage work and poverty, and then Texas more like Mexico — the race to the bottom. They’re not happy with 12% unionization; they want zero percent, where all of us are defenseless and completely under the thumbs of our “betters.”

In brief, prepare for more wars and greater austerity.

If you think I’m exaggerating, over the next months observe how the national GOP is trying to rig the 2012 elections in Pennsylvania, Michigan, and a few other big states. Our Electoral College system is bad enough, but they are going to “reform” it to make it worse by attaching electoral votes to congressional districts, rather than statewide popular majorities.

This would mean Obama could win the popular vote statewide, but the majority of electoral votes would still go to the GOP. Add that to their new “depress the vote” requirements involving picture IDs, which are aimed at the poor and the elderly, and you’ll see their fear and hatred of the working class.

We’ve always had government with undue advantages for the rich. But just watch them in this round as they go all out to make it even more so. We have to call it out for what it really is, and put their schemes where the sun doesn’t shine.

[Carl Davidson is a national co-chair of the Committees of Correspondence for Democracy and Socialism, a national board member of Solidarity Economy Network, and a local Beaver County, PA member of Steelworkers Associates. In the 1960s, he was a national leader of SDS and a writer and editor for the Guardian newsweekly. He is also the co-author, with Jerry Harris, of CyberRadicalism: A New Left for a Global Age. He serves as webmaster for SolidarityEconomy.net and Beaver County Blue. This article was also published on Carl’s blog, Keep On Keepin’ On. Read more articles by Carl Davidson on The Rag Blog.]