Danny Schechter : Adbusters’ ‘Battle for the Soul of Occupy’ 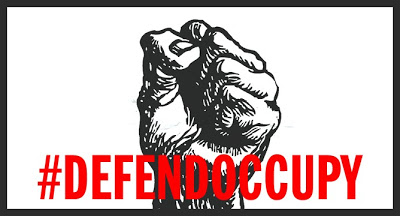 Graphic from AdBusters.
Here we go again:
Battle for the ‘soul’ of Occupy

AdBusters‘ latest communiqué is offered up almost like a new commandment from the mountaintop of political purity.

Perhaps my problem is that I live in too many worlds at the same time, while many political eras live in me.

That may be why I responded so negatively to a recent polemic wrapped up in a poetic communique from AdBusters, the culture jammers in Canada, who do so much good work (and often so creatively) battling the consumption virus promoted by big corporations many of us have grown to despise.

I respect their magazine and marvel at the impact they have had in helping to stir Occupy Wall Street into existence. They clearly feel a sense of ownership in the movement and act not just as the midwife that promoted the occupy idea, but as the guardians of their version of the movement’s essence, as if they own the copyright and have to defend it aggressively in the court of public opinion.

Their latest communiqué, directed to “jammers, occupiers and Springtime dreamers,” is offered up almost like a new commandment from the mountaintop of political purity, warning one and all “that a new enemy is in their midst that is… threatening to neutralize our insurgency with an insidious campaign of donor money and co-optation.”

Batten down the hatches! Defend the ramparts! Fly the flag!

They then call for a “fight to the finish” to defend the “soul of Occupy” that they claim is menaced by a “THEY” that is out to get us like some boogie man that acts like a virus and can’t be resisted. Will “Black Block” militants become their enforcers?

Who is the THEY? Nefarious bankers on Wall Street? The CIA and Blackwater-type mercenaries? Karl Rove and the Koch Brothers?

No, their new enemy is pictured not as an external threat representing the status but an internal one they have no use for.

Read on: “First they silenced our uprising with a media blackout… then they smashed our encampments with midnight paramilitary raids… “ And now? They are planning to destroy all that that we built.

Suddenly the brutal police raids on Occupy and the initial media indifference are conflated with alleged operatives of the Obama campaign on a stealth mission of cooptation.

There’s no real evidence cited, but that’s not the point of this appeal to fear and unity. Political paranoia is always driven by what COULD happen, not, necessarily, what is happening,

The political theory behind all this is that Occupy is not just the vanguard of the revolution but the revolution itself, and is in danger of being stifled by reformers who fear its imminent success in toppling capitalism. How realistic is that?

This worst case scenario is projected as a coordinated and calculated strategy by groups they put down in terms reminiscent of the way the Chinese cultural revolution demonized and stigmatized millions of people as counterrevolutionaries that tore the Chinese Revolution apart using strident ideology to silence a “class enemy.”

Were there class enemies? Sure, there always are, but thousands of innocent people were accused and abused by ultra leftists on a mission from Mao.

Will you allow Occupy to become a project of the old left, the same cabal of old world thinkers who have blunted the possibility of revolution for decades? Will you allow MoveOn, The Nation and Ben & Jerry to put the brakes on our Spring Offensive and turn our struggle into a “99% Spring” reelection campaign for President Obama?

Is this really what is happening or is it more like a conspiratorial fabrication? Is this type of insulting language really appropriate for a movement that claims to be democratic and inclusive?

MoveOn and Van Jones have denied they are trying to control the movement, refuse to speak in its name, and couldn’t steal its thunder if they wanted to. The Nation is just one magazine of many that has been sympathetic to Occupy, but also supports the more structured but very democratic resistance in Wisconsin that Ad Busters ignores.

Ben & Jerry are individuals, former business partners, who want to help by raising money for Occupy after consulting with many activists on how they could be helpful. They seem sincere to me.

Why is all this so threatening? Why the fearful and purist denunciation? Can’t they respect people who — unlike Occupy’s core activists — don’t make decisions at General Assemblies.?

Occupy has in the past sought coalitions with labor unions and black community groups that often have more traditional leadership structures. They haven’t tried to dictate politically correct processes that allies and supporters must accept. Why this intolerance now?

By the way, I have been pouring my heart out in books, blogs, films, and opinion pieces about the failures of the Obama Administration in combating the financial crimes that enabled the depression we are coping with. My latest exposes the campaign’s pandering on terrorism and threatening Iran.

MoveOn would not help me promote my work, and neither has The Nation, really, or, for that matter, Ben & Jerry, whose work I admired more before they sold their company to a mainstream corporation (although they have been engaged in admirable campaigns challenging military spending for years).

That doesn’t make them all sellouts. Even if in the eyes of some they are the “enemy” because they aren’t “horizontal” enough, or anti-capitalist enough, or anarchistic enough, and may act more like reformers than Ad Buster-approved revolutionaries. 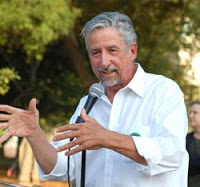 On Friday, NYU hosted a tribute to the 50th anniversary of the Port Huron Statement, the founding document of SDS that sparked activism in the 1960’s. Former SDS leader Tom Hayden was on hand to tell some stories about that era.

He also recounted how liberals with whom SDS were aligned at first demanded that their movement become more outspokenly anti-communist, even as the movement rejected the cold war.

When SDS wouldn’t go along with this arrogant old left thinking, (funded in part by the CIA), there was an internal “trial” and interrogation that led to SDS’ defunding and ouster from its offices.

According to Hayden, it was a scene right out of Kafka, not unlike the tone of this recent communiqué.

SDS stood true to its principles and politics and refused to work with the people who tried to control them.

The result: they grew more influential. They successfully resisted cooptation and fought for racial justice and against the war in Vietnam. They supported organizing on campuses and in communities. They challenged the Democratic Party, which later also fragmented over the war with Richard Nixon the ultimate beneficiary of all the discord.

SDS couldn’t find a way of bridging its own ideological divides and the movement broke into warring factions that led to an organizational implosion. There also was plenty of paranoia and repression with the government covertly pitting one group against the other, using the FBI, racism, and phony patriotism.

There is plenty of blame to go around. And there may be parallels here with this call to “save the soul” of Occupy.

Can we learn from this destructive history of acrimony and sectarianism or are we doomed to repeat it?

[News Dissector Danny Schechter wrote Occupy: Dissecting Occupy Wall Street (Cosimo Books) based on his coverage for his Newsdissector.net, Al Jazeera.com, and other outlets including The Rag Blog, and also directed a TV film on the organization of Zuccotti Park. Earlier, he was an activist in the civil rights, anti-war and anti-apartheid movements. Email Danny at dissector@mediachannel.org. Read more articles by Danny Schechter on The Rag Blog.]