David MacBryde : A Look at Elections and Media in Germany

BERLIN — Here is a picture of some of us Americans in Berlin having a delightful time on the fifth of July at a street party among thousands of friendly Berliners. 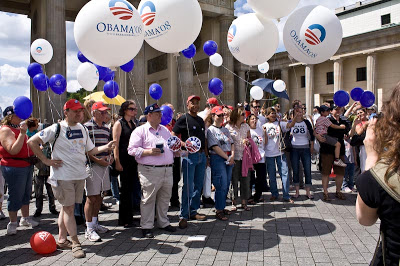 Obama supporters in front of the Brandenburger Gate, Pariser Platz, Berlin, Germany. Photo by Karen Axelrad.
Politically, German preferences are about 78 per cent for Obama to 14% per cent for McCain.

Our media here displays big balloons to attract the attention of other Americans for voter registration. Lots found us.

Contrasting US “winner take all” elections with German proportional voting can lead to interesting insights. But another crucial difference is the media ownership and culture.

The “common good” and “promoting the general welfare.”

In Germany (after the defeat of fascism) the founding document starts with the inalienability of human dignity. And there is considerable emphasis on the common good, the power of government deriving from the people for the well being of the people.

In particular, one core tenet in their democracy is for citizens to be well informed, able to have informed opinions. As a practical matter the broadcast media was developed as a decentralized network of public stations with regional socially representative media boards.

It is financed through fees paid by owners of receivers – with the amount set by the federal government but decisions made by regional representative boards in order provide secure financing and to buffer the broadcast stations from censorship and retribution via cuts in financing — by the government or by private corporations or sponsors.

Although there are lots of details, one very important fact is the contrast here between this democratic decentralized public good and the state monopoly broadcast of the (former) East Germany.

Media reform and changes due to the internet.

In Germany there is a huge and growing use of broadband internet activity. And there have been changes in the print media with shifts in advertising budgets. And, interestingly, the potential for interaction between the internet and the decentralized publically owned broadcast network.

Here, as elsewhere, the huge success of internet activity brings with it the realitiy of a flood of information. The Germans make a serious distinction between “public” opinion and “published” opinion – one being the actual opinions of citizens the other being those opinions that get visibility, get seen by the public, become “public” issues. Years ago with few news shows, most people were watching more or less the same news. One hot topic here concerns how to handle the information flood and how to focus on “important” issues in their democracy. The proportional voting system here does mean that innovative ideas as well as issues some feel are important but not (yet) hot or focused on do get into “the news”, do get some public visibility.

And, with work, can become majority opinion. (For example, in some cases the German Greens are suffering from success in the sense that some of their efforts have become mainstream, and taken on by other parties, so are no longer “their” issues.)

Although there are lots of problems here, and there is a need for change, it is my sense that the media ownership and culture, along with the electoral system, does provide the Germans with ways to work out solutions to problems.

In any case, it is sure a pleasure (see the photo) to be here among a lot of well informed citizens, and citizens who consider the opportunity to be well informed to be a public, common good. 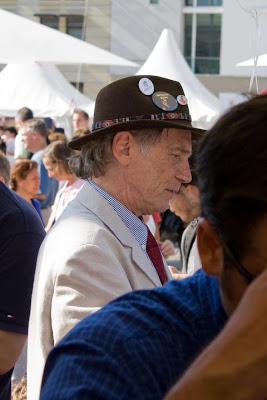 The Rag Blog’s David MacBryde.
I am not sure what all is happening in the United States in the way of media reform. Hope to follow Netroots developments. There is now (in contrast to the times of trauma after 911) at least a lot of information available.

One question: in “growing the commons” might it sometime be possible for bloggers and other actors to cooperate in a web-based Publishers and Journalists and Academics Roundtable???

* So that a range of people involved in the providing of information to get together to focus on issues, making the roundtable accessible on line;

* To raise research questions on issues being worked on — to enable occasional web “teach-outs” on issues ?

That could be powerful. And a nice development for after the elections.

The times, and the media ownership and culture, are indeed a changing. Best wishes from Berlin for “growing the commons” to Netroots 2008 in Austin.