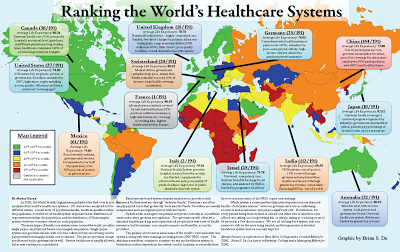 Image from Yale Journal of Medicine and Law.

Letters from France III:
The French healthcare system
is the best in the world

“There are no uninsured in France. That’s completely unheard of. There is no case of anybody going broke over their health costs.” — Victor Rodwin, New York University

[This is the third in a series of dispatches from France by The Rag Blog‘s David P. Hamilton.]

PARIS — President Obama dropped the healthcare “public option” like a hot potato at the very onset of last year’s debate in the U.S. over reforming healthcare. Despite polls of average citizens to the contrary, Obama asserted there wasn’t enough support for it, meaning that there wasn’t enough support among the economic elite, health insurance corporations, pharmaceutical manufacturers, doctors, and other medical capitalists, and hence, not enough support among members of Congress beholden to those interests. Let’s take a look at what they’re so afraid of.

The World Health Organization (WHO) ranks the French health care system as the best in the world. The U.S. system ranks 37th. The complex details of the procedures used to determine these rankings are available on the WHO website. The WHO has hundreds of rankings on health related topics as specific as beer consumption by country. The U.S. fails to distinguish itself favorably in any of them.

Of particular note is the ranking by total health care expenditures as a percentage of the GNP where the U.S. at 15.4% leads the world, only exceeded by the Marshall Islands and far ahead of any other major industrialized nation.

Hence, while the U.S. health care system produces mediocre results, it is the most expensive. For France, with a system rightists consider far too expensive to maintain, the corresponding figure is 11.4%. Different studies show this disparity even greater, at 16% and 10.7%. In the U.S., $6,400 is spent annually per capita on health care costs while the average French person spends barely over half that amount, $3,300.

Other health care assessments tell much the same story. Infant mortality is a principal indicator of the quality of health care. In France, it is 3.9 per 1,000 live births. In the U.S., the rate is nearly 80% higher at 7.0. Life expectancy is 79.4 years in France, two years more than in the U.S. Death from respiratory disease, often preventable, is 31.2 per 100,000 in France while in the US it is 61.5, despite the fact that nearly twice the percentage of French adults smoke tobacco compared to the U.S.

France also has many more hospital beds and doctors per capita than the U.S. A more recent study by researchers at the London School of Hygiene and Tropical Medicine measured “amenable mortality,” a measure of deaths that could have been prevented with good health care, in 19 industrialized nations. France again came in first. The U.S. was last. Not surprisingly, French citizens’ satisfaction with their system is 65%, the highest level among all European countries, compared to 40% in the U.S.

The French pay for their healthcare primarily by paying taxes that cover medical services. These taxes are high. Americans don’t pay as much in taxes, but pay much more when one counts insurance costs and their expenses for medicines, doctors, and hospitals.

The French system offers universal coverage and everyone is required to participate. In the U.S, 15.4% (46.3 million people) have no coverage at all and about twice that many are underinsured. Hence, there are roughly twice as many Americans with inadequate coverage as there are people in France.

The French system doesn’t cover everything. Co-payments in France range from 10 to 40% for most medical services. Hence, 92% of the French have complementary private insurance. This private health insurance makes up 12.7% of French health care expenditures. All private health insurance in France is required to offer guaranteed renewability, so you cannot be dropped if you get sick.

Most private health insurance is provided by non-profit organizations and their “modest” premiums are usually paid by employers. Furthermore, the more sick one is, the higher percentage is paid by the insurance system, 100% for 30 serious and chronic illnesses such as cancer and diabetes.

This feature is known as “solidarity,” a consciousness of community almost altogether absent in the hyper-individualistic U.S. Victor Rodwin, a professor of health polity at New York University states, “There are no uninsured in France. That’s completely unheard of. There is no case of anybody going broke over their health costs.”

How are the French able to accomplish this? First, the insurance system is run by quasi-public, non-profit agencies that cover different sectors of French society. These agencies directly negotiate prices for medicines with manufacturers, homeopathic medicines included. They also negotiate compensation schedules with doctors. Doctors are free to charge whatever they want, but the amount the system will reimburse is fixed.

Another reason for the lower costs is that, in the words of Kerry Capell in Business Week, “France reimburses its doctors at a far lower rate than U.S physicians would accept.” French doctors earn about a third as much as their American counterparts who are the best-paid group of professionals in the world. But French doctors have no student loans to pay since their medical training was paid for by the state.

In addition, France is not tort-friendly, so malpractice insurance is negligible. The French government also pays two-thirds of relatively high social security taxes for doctors. In France, general practitioners are specifically mandated to be concerned with prevention, public health education, and epidemiology.

In France, unlike in the U.S., getting rich is not the principal motive for pursuing a career in medicine. (I have as much education as a typical doctor, but the most I ever earned as a public school teacher in the U.S. was less than $45,000 a year. Stupid me.)

The French health system is financed primarily by a 13.55% payroll tax on income, of which almost 95% is paid by employers. In addition, there is a 5.25% “general social contribution tax” on all forms of income that contributes to health care. This tax is reduced to 3.95% on pensions. Special taxes on alcohol and tobacco also support the health care system.

Most Americans assume that universal coverage means losing one’s choice of doctors. This is not the case in France where one can go to any doctor one chooses. A patient can even go directly to specialists without referral, although the level of government compensation is higher if one goes through a general practitioner to get a referral. Furthermore, there are no lengthy delays in getting an appointment.

According to Joseph Shapiro on NPR, “the French live longer and healthier lives… because good care starts at birth. There are months of paid job leave for mothers [and now fathers] who work. New mothers get a child allowance. There are neighborhood health clinics for new mothers and their babies, home visits from nurses, and subsidized day care.”

How did the French achieve the creation of this system? The simple answer is that they elected governments led by socialists and communists who advocated these programs.

In 1930 the CGT (Confederation Generale du Travail), the largest labor union confederation, began to press for a healthcare program for workers. The CGT was then controlled by the French Communist Party. In 1934, the Communist and Socialist Parties formed the “Popular Front” and two years later won the national elections leading to the presidency of Leon Blum, first socialist and first Jewish president of France.

The Popular Front government instituted a program of healthcare coverage similar to Medicare, but for workers, not the elderly. This system was abolished during the Nazi occupation, but the Free French in London developed plans for an expanded system in the postwar period. Those involved included many CGT leaders, principally communists.

(It is probably necessary to point out to the American reader that after its initial treasonous collaboration during the period of the Nazi/Soviet non-aggression pact, Communist Party members comprised the principal element in the French Resistance.)

In 1945, the provisional government established Securite Sociale, a program of health care and pension benefits. It was a compromise negotiated between Gaullist and Communist representatives in the new French National Assembly. The conservative Gaullists were opposed to a state-run healthcare system, while the communists favored a complete nationalization. The compromise laid the foundation for the current system. Subsequently, expansions in the system have principally occurred during Socialist Party-led governments.

In 1958, a survey of the French asked, “Should the healthy pay for the sick or should everyone get back only what they put into the system?” Eighty-six percent answered that the healthy should pay for the sick and 95% approved of the compulsory nature of health insurance.

This points to a central problem for the implementation of universal healthcare in the U.S. Americans lack social consciousness. Capitalist culture denigrates social solidarity and glorifies individualism. This, of course, favors the highly class conscious capitalists who are quite well organized and who exhibit admirable solidarity.

The “reforms” instituted by Obama represent what the healthcare industry was willing to accept in return for the mandate requiring everyone to buy their defective product. Those measures won’t budge the figures that clearly show the defects of the U.S. system where healthcare remains a commodity. In France, it is an inalienable right that no politician would dare to violate.