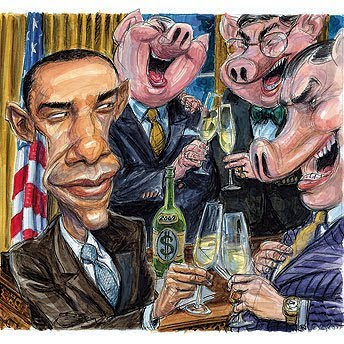 Political cartoon from OpEd News.
I rest my case:
Surrender and sellout

According to all reliable news reports, John Boehner assured House Republicans that the budget deal does not endanger any Republican priorities and that the president gave up his previous demand for increased taxes on the wealthy.

In other words, the president pulled the rug out from under Democrats who were looking forward to attacking Republicans for wanting to cut Medicare in the 2012 elections.

To this president and his congressional allies, making a deal, any deal, is more important than any principle.

The desperate desire to achieve agreement even if it means giving up every fundamental principle means confrontation avoidance as an end in itself regardless of what is given up. It means agreements that lack moral content. It means there are no convictions worth drawing a line in the dirt over.

From now on, no demand that president Obama ever makes will be worth its own sound waves. The whole world knows that if his adversaries stand firm, he will give in, no matter what he may have said about any principles. He has become a lame duck before the end of his first term.

Some will say, “What could he have done?” He could have stuck to his guns to the very last minute. Then if the Republicans still would not compromise, he could have done what Big Dawg Bill Clinton suggested: raise the debt ceiling by presidential order. He would have been on solid Constitutional ground, since the 14th Amendment mandates the United States government to honor its debts.

In other words, he could have shown some guts and fulfilled his duty to uphold the Constitution no matter what heat the Republicans would generate. But there is the rub. He can’t take the heat.

[David Van Os is a populist Texas democrat and a civil rights attorney in San Antonio. He is a former candidate for Attorney General of Texas and for the Texas Supreme Court. To receive his Notes of a Texas Patriot — circulated whenever he gets the urge (and published on The Rag Blog whenever we get the urge) — contact him at david@texas-patriot.com.]