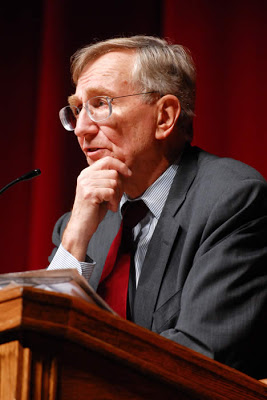 Investigative reporter Sy Hersh dropped a bombshell at the University of Minnesota, March 11, 2009.

The Bush administration held that, as commander in chief, the president could authorize almost anything.

Investigative journalist Seymour Hersh revealed in a speech at the University of Minnesota on March 11, that a hit squad — an “executive assassination ring” in his words — that reported to Vice President Richard Cheney, was plying its trade throughout the world during the administration of George W. Bush. Task Force 121 was especially active in Afghanistan. Even the Joint Chiefs of Staff could not hold them answerable. These executioners were not required to report to station chiefs or ambassadors.

In addition the CIA, after 9/11, was spying on American citizens within the United States. This was a violation of the agency’s charter. There was no legal basis for what they were doing, but they saw their targets as enemies of the state. These people were under the Joint Special Operations Command (JSOC). It is likely that there was no presidential “finding,” authorizing these activities. The Bush administration held that, as commander in chief, the president could authorize almost anything.

Hersh lamented that the members of the execution squads were idealistic and very capable people, some of whom are now agonizing over what they have been doing. He made these remarks in answer to a question and had not intended to discuss these matters until he had completed his research. Hersh referred to a New York Times article that cited a Lebanese source to the effect that Lebanese Christian leader Elie Hobeika was car bombed in 2002 as part of an Israeli-US effort to prevent him from testifying in Brussels against Ariel Sharon. He later said these matters were “not something I wanted to dwell about in public.”

But to be fair to the US operatives, there is some evidence that rogue Syrian intelligence people were hired to kill Hobeika in 2002 and, later, Elie Hobeika. Some intelligence people think Eliot Abrams and Karl Rove handled the high level foreign assassinations. We’ll have to wait for Hersh’s promised book for better information.

Some find a precedent in the deaths of investigative reporter Danny Caselaro and his NSA source in 1991. Caselero’s death was made to look like a suicide, and there is no evidence that the George H. W. Bush administration was involved. Later, a successor to Caselero was clearly “suicided” after he tried to give evidence of wrong-doing to Attorney General Janet Reno. None of this is evidence of an executive branch assassination team.

The matter of spying on American citizens has a long pedigree. In the Reagan administration, there was an extensive operation to intimidate press people and to keep track of folks who opposed the not-so-secret war in Central America. It is said that Oliver North had something to do with this and that Vice President George H. Walker Bush supervised all of it.

Before that, there was Operation Chaos, begun under Lyndon Johnson and greatly expanded by Richard Nixon. It used the FBI and CIA to spy on dissidents. It became so large that both the FBI and CIA eventually balked.

One would suppose that Hersh’s forthcoming book would deal with software used to spy on dissidents and keep track of various financial transactions. The Reagan administration managed to seize a very sophisticated software program called PROMIS. There was a great deal of litigation initiated by a firm called Inslaw to obtain compensation. Despite the services of ace attorney Eliot Richardson, the firm obtained no relief in federal courts. The software was modified and used and sold by the US and Israel — at least according to a repentant Israeli intelligence officer. This software was repeatedly modified and now exists as what is called Main Frame, which was probably the subject of the famous drama in Attorney General John Ashcroft’s hospital room.

In addition to that, we now know that the NSA has the facilities, equipment and software to scoop up millions of domestic communications on a daily basis. A former NSA officer says that the NSA is mainly interested in the communications of journalists. There is no second source to verify this, but there is enough evidence to demonstrate they have the capabilities to do this. Whether any of this goes on under the Obama administration, is an open question. We hope not.

2 Responses to Did Bush Administration Have ‘Executive Assassination Ring?’