Don Swift : Perry, Bachmann, and the Threat of Dominionism 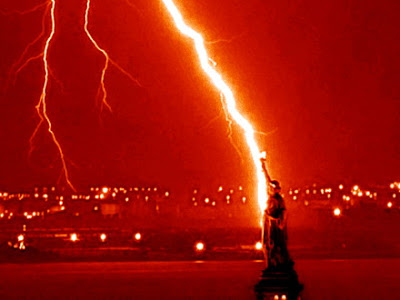 Image (without irony) from OpenAirSeattle.
A threat to American liberties:
Dominionism and the Republican Right

Both Rick Perry and Michele Bachmann have clear ties to the Christian Dominionists, who do not believe in the separation of church and state.

[This is the first in a series on Dominionism by Don Swift.]

In 1960, Senator John F. Kennedy, then a candidate for the presidency, found it necessary to explain to assembled Baptist ministers in Houston that he would respect the American principle of separation of church and state and that he would not let the Catholic bishops dictate policy to him.

In 2008, many were troubled by the views of Senator Barack Obama’s pastor, the Reverend Dr. Jeremiah Wright, who had a direct way of putting things and sometimes seemed too influenced by racial bitterness. Obama had to distance himself from his friend and leave the congregation.

In this presidential election cycle, two of the leading Republican candidates for the presidency, Rick Perry and Michelle Bachmann, have clear ties to the Christian Dominionists, who do not believe in the separation of church and state. Should one of them become the Republican standard bearer, he or she should be required to answer some probing questions about the separation of church and state and the attitudes of his or her Dominionist friends.

These people are not friends of democracy. Sarah Palin, a very influential Republican who seems to be weighing the possibility of running for the nomination, also is tied to the Dominionists.

In addition, there is The Family or The Fellowship, a semi-secret religious organization comprised almost entirely of Republican politicians who work behind the scenes to translate their religious beliefs into public policy. By all accounts this secretive brotherhood possesses great power and has connections and influence throughout our society.

Although many have claimed these people are Dominionists, it is not at all clear that their ultimate goal is to exclude non-Christians from office. They seem perfectly content to guide others in exercising power. They might better be designated soft Dominionists, but their lust for autocratic power is no less frightening than the desires of the hard Dominionists. Like the hard Dominionists, they see themselves as a spiritual royalty or elite who have a special claim to the right to shape the nation’s affairs.

Their clandestine operations and mingling of religion and politics are not a healthy development and are inconsistent with the separation of church and state.

Dominionism is an academic term that applies to the belief that the saved must battle to take over the world in God’s name and rule it according to Biblical principles and injunctions. It refers to a conservative Protestant movement that is both political and religious.

The basis for Dominionism is found in Genesis 1: 26-27, where God gave Adam dominion over all earthly things. Though Adam and his progeny lost that power through the fall, it is believed that baptism restored that power to true believers. They were meant to rule, and governance by people they consider non-Christians is a kind of sacrilege.

There is a tendency among them to delegitimate other Christian religions and to even hold that demons run some other churches. Some Dominionists hold that unbelievers can be compelled to accept salvation. They adhere to some unusual beliefs that many say are unbiblical. For example, they teach that some of their leaders can somehow incarnate Christ and exercise his power in this world.

In 1994, Frederick Clarkson wrote that Dominionism and Social Darwinism are of the same cloth. Social Darwinism is misnamed; it really goes back to Thomas Malthus, a misguided preacher who thought that intense competitiveness and self-interest were the essence of social evolution. Rejecting any compassion, he thought it right and natural that the strong benefit at the expense of the weak.

Charles Darwin did not think this way and wrote about how compassion and kindness were necessary and part of human nature. The Dominionists believe it is sinful for people in distress to look to government for help; God will provide. Like our Puritan ancestors, they thought that the rich were blessed by God, and the poor deserved their fate.

Scholars have noted that Social Darwinism is frequently associated with authoritarian mindsets and strong suspicion of others. In the case of the Dominionists, they use a distorted form of Christianity and Social Darwinism to define themselves as an elite and to define others in such a negative way that it is easy to generate considerable hostility toward them.

Clarkson added that they expect women to be submissive and stay at home. This outlook has changed because there are so many females among the Dominionist leadership. Even Michele Bachmann, who once defended submission, is now busy defining it away.

Dominionism always involves an element of elitism and more than a small dose of authoritarianism. These people think they have been selected by God to rule. Especially empowered in that way, they tend to think that whatever they do is justified. They see those who disagree as agents of the forces of evil.

The 75 year-old Family or Fellowship, based in the Washington, D.C. area, is an organization that reflects this elitism and authoritarian outlook. Its views smack heavily of theocracy, but a careful student of the cult could conclude that they worship power itself. 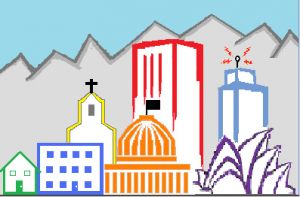 Image from a website called “7 Mountains: Fulfilling Your God Given Assignment.”
Dominionists speak in terms of reclaiming the earth from Satan and capturing the seven mountains of church, family, education, arts and entertainment, business, media, and government. Each of the seven mountains should be ruled by Dominionists.

No one knows how many Dominionists there are in the United States. Some of them speak in terms numbering half of one percent of the population. Others claim a growth rate of 9 million a year, which is very unlikely. The number of people who would claim this label is probably small, but Dominionists’ influence among conservative Christians is substantial and growing. They thoroughly understand the mindset of conservative Christians and are very adept at inserting their ideas into many parts of it.

This world of Dominionism can be assessed through television networks like GODTV, DayStar, and the Trinity Broadcasting Network. Dominionists are clearly active, zealous, and well organized, and their numbers appear to be growing among evangelical Protestant clergy. Their ideas are clearly cross-fertilizing with other forms of conservative Protestant Christianity.

Some see Dominionism as a sort of Christian Wahabism They all think that true Christians were given by God a right to rule all human institutions. If one doubts that these people lack influence, recall Senator Charles Grassley’s efforts to look into six religious organizations that were accused of converting religious funds to personal use. He backed off, and his staff recommended that the IRS repeal the rule preventing churches from electioneering.

Dominionists have substantial influence among today’s Tea Party Republican leaders. Recently there were several carefully researched articles on Dominionism, and CNN’s Jack Cafferty even had an essay on it. There followed a stream of articles by right-wing publicists reassuring us that no Christians want to take over government, that they just want to have some influence in it.

Michael Gerson, one of the most capable Republican spokesmen, took the lead in distancing Tea Party leaders from Dominionism. He attributes fear of the Dominionists to the anti-religious attitudes of many liberals. Lisa Miller, Newsweek’s religion editor, also said fear of the Dominionists is unwarranted. And Ralph Reed has said that the Dominionists do not exist: “The notion that Bachmann, Perry or other candidates secretly harbor ‘dominionist’ theology is a conspiracy theory largely confined to university faculty lounges and MSNBC studios.”

Recently, some Dominionist clergymen came forward to say that they really are not seeking a “theocracy.” On the other hand, more than a few respected evangelical spokesmen state that the fears are not unwarranted, and they distinguish between themselves and the Dominionists. Some of them must have read enough to realize that the Dominionists intend to take over their denominations.

Dominionists think God intervenes regularly in earthly matters. Some think that the terrible Japanese earthquake was God’s punishment for not heeding one of God’s decree. On the other hand, they say that God ended mad cow disease in Germany and a drought in Texas. It is said among them that Jezebel and three minor demons run the Democratic Party. In Texas, they have strange ceremonies with plumb lines and branding irons; and they are said to have driven inscribed stakes into the ground in every county.

Michele Bachmann half-joked that God might have sent Hurricane Irene to show his displeasure that Americans have not fixed their debt problem. She seems to think that God has very clear ideas about public policy. On a Truth in Action ministries video, she said that God taught that no tax money should be spent on social welfare. It should all come from charity.

Dominionists present a serious danger to the Republic because they do not believe in the separation of church and state and because they consider themselves a royal priesthood entitled to rule. People who think they are that special will do anything to gain power and will misuse it when they want.

Of course, there are other groups out there who also think they are that special. A problem is that the Dominionists, including the soft Dominionists in The Family or The Fellowship, have a way of allying with these other power-hungry groups such as the corporate elite and extremists in the intelligence and military communities.

3 Responses to Don Swift : Perry, Bachmann, and the Threat of Dominionism