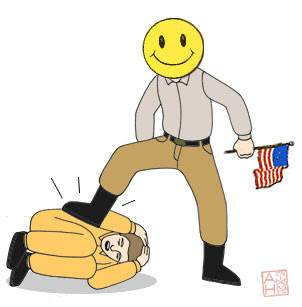 “Banality of evil” is a phrase coined by Hannah Arendt. She contends that the great evils in history in general, and the Holocaust in particular, were not executed by fanatics or sociopaths, but rather by ordinary people who accepted the premises of their state and therefore participated with the view that their actions were normal.

In the United States we see examples of this embodied in the Tuskegee syphilis study, the Guatemala syphilis study, the malaria studies at the University of Minnesota in 1940, the 1950s gonorrhea prison inmate study, the Milgram obedience experiment, and the Stanford prison experiment. More recently we have observed torture, supervised by physicians and psychologists, at the various military prisons that grew up as an aftermath of the 9/11 attacks.

Thus, if professionals can be so possessed, we can begin to comprehend the ethical void, the lack of human understanding, the absence of compassion in some of our lay political groups diligently working away in the United States today. With the Republican control of Congress these folks are once again on the attack.

They pretend to despise “big government” but are quite willing to use government regulation when it suits their specific purposes. Worsening the situation is the subservience of Republicans — and some Democrats — to quasi-religious groups that chose to interfere in our health care and other personal decisions in collusion with PhARMA and the health insurance industry.

The Republicans posture at being “pro-life”; however, this attitude solely refers to a fetus in utero. Once the child is born they have little or no concern. Witness that the United States now has the highest infant mortality rate in the developed world according to data from the World Bank. Much of that mortality is due to absent pre-natal care under our insurance cartel-dominated health care system.

It is possible that this will worsen in light of the $50 million in cuts proposed by the Republicans for the federal Maternal and Child Health Block Grant, and the $1 billion in cuts to programs at the National Institutes of Health (NIH) that support lifesaving biomedical research aimed at finding the causes of and developing strategies for preventing preterm birth. Further, they are proposing $1 billion in cuts for the Centers for Disease Control and Prevention (CDC) for preventive health programs, largely for children.

It is difficult for me to understand where these folks are coming from. Where are all of these “Right to Life” advocates and their political prostitutes when it comes to real life child health and welfare? Where are these folks who march on Washington with “baby killer” on their lips and placards while they stand by in complete silence as babies and children die from disease or starvation in the United States due to our extremely flawed health care system. Where are their voices as infants and children are killed by bombs dropped by U.S. warplanes in the Middle East and West Asia?

Two efforts to provide Medicare end-of-life counseling in the recently passed Patient Protection and Affordable Care Act (PPACA) went for naught because of distortions perpetrated by the Republicans who characterized the efforts as “death panels.” Of course this was balderdash intended to confuse the uninformed.

The alleged “death panels” were in fact a program wherein a family doctor would sit with a family and discuss in detail an individual’s preferences concerning terminal care, as provided in a Living Will, health care power of attorney, or plans for hospice care.

Those interested in learning more about this subject may visit the National Hospice and Palliative Care Organization at www.caringinfo.org. Any loving, caring family should think about, and discuss, this very real subject before being faced with a real life situation when judgment may be clouded by grief or guilt. I — at the age of 89 and with cancer of the prostate — have meticulously researched and arranged for hospice care. It is my decision, and my decision alone, and not that of some group political charlatans.

To confuse the issue further the anti-choice folks are now inserting themselves into your decisions about how to die, according to an excellent article in The Nation. These folks want to tell you how you should die, even if that means dying in agony. They would repeal the Death With Dignity laws in Oregon, Washington, and Montana.

This drive — and this should surprise no one — is headed by Operation Rescue, the Beverly LeHaye Institute, and the Family Research Council. The contend that everything should be done to sustain life — and thereby increase the sense of guilt for those who chose to control the way they end their lives.

Not only are we in the United States saddled with a far-from-perfect health care law, which continues to provide no care to millions, has no inherent cost controls, and much of which does not take effect for three more years — provided the whole thing isn’t repealed by the Republicans — but we also face an increasing doctor shortage in the primary care specialities.

More and more our care will fall to nurse practitioners or physician’s assistants. The day of the family doctor sitting at your bedside or stopping in the kitchen for a cup of coffee at the end of a house call are gone. We in the United States, as opposed to the European and certain Asian nations, do not provide government subsidy for primary care doctors. If you want a house call, settle in France!

And if you feel that health care is overly costly, you are correct. A friend was recently billed $2,000 under Medicare for a CT Scan of the chest that took 10 minutes. In Europe this would cost a fixed fee. depending on country, of the equivalent of $200-$400. (See “Paying an Arm and a Leg” in Mother Jones.)

Of course, if the current Republicans have their way (see Wisconsin for example), medical costs will worsen as benefits for the sick, the poor, and the disadvantaged are cut, and the rich and the corporations are blessed with further tax cuts.

Not only will the health insurance cartel benefit further under the Republicans, with aid from a great number of weak-kneed (or well paid off Democrats), but the pharmaceutical industry will do just fine.

Now it appears that the DEA will legalize the psychoactive chemical in marijuana as a Schedule III drug. This will allow the pharmaceutical companies to market the drug while common recreational use is still penalized. The psychoactive chemical in marijuana, delta-9-tetrahydrocannabinol, is currently schedule I, the most restricted schedule with the greatest criminal penalties. Under schedule III it would be placed in the same classification as hydrocodone and could be prescribed with impunity. As a result, the pharmaceutical industry can increase its profit while we maintain our privatized prisons full of those folks arrested for possession!

I would also like to call attention to the Public Citizen’s Health Letter, suggesting that there is some justice in the world. The pharmaceutical industry is the biggest defrauder of the federal government under the False Claims Act. The study found that pharmaceutical cases accounted for at least 25% of all federal FCA payouts over the past decade compared with 11% by the defense industry.

Of the 165 pharmaceutical industry settlements comprising $19.8 billion in penalties during the past 20 years, 73% of the settlements and 75% of the dollar amount have occurred during the past five years. More than half the fines were paid by GlaxoSmithKline, Pfizer, Eli Lilly, and Schering-Plough. Please keep this in mind as you watch the interminable pharmaceutical ads on television.

Finally, remember that Physicians for a National Health Program is still carrying on the fight to some day bring our country a system of health care just as good as that in every European nation.

In the meanwhile we must stand by our unionized workers. I am quite sensitive to this issue, having been reared among the coal fields in the 1920s: the company towns, the company stores, the 12-hour days, the children headed to the coal pits at age 18. And, oh yes, the coal barons with their 18-acre walled estates, on the periphery of the mining area. It was even then basically a two class society.