Ed Felien : Malalai Joya is a Champion for Afghan Women 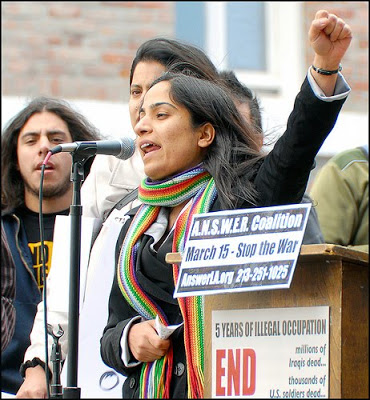 MINNEAPOLIS — I met the bravest person in the world Friday night, April 1, at St. Joan of Arc Church in South Minneapolis when I heard Malalai Joya speak.

She’s about five feet tall with a soft voice and a backbone as strong as steel. She was expelled from the Afghan Parliament (after being, at 26, the youngest person ever elected) because she “insulted” both the Afghan opium warlords and the U. S. government for supporting the corrupt leadership of Hamid Karzai.

There have been four assassination attempts on her life. The Taliban hate her because she organizes women’s groups and schools for girls.

Malalai Joya has stood up to them all. She is unafraid. You look into her eyes and fear melts away. You appreciate that all your struggles are child’s play in a sandbox compared to her struggle to improve the lives of young women in Afghanistan.

She believes passionately that women in Afghanistan would be better off if the U. S. left immediately. She considers the Taliban attitudes toward women far less dangerous to their health than drones and airstrikes.

She talked briefly about how the CIA benefits from the opium trade in her country. Although she is no friend of the Taliban, she acknowledges that during their government opium production in Afghanistan was almost 0% of the world supply, and, since the CIA, with the help of the opium warlords, has taken over the government, production is over 93% of the world supply.

Support for the work of Malalai Joya can be directed to the Afghan Women’s Mission at www.afghanwomensmission.org.