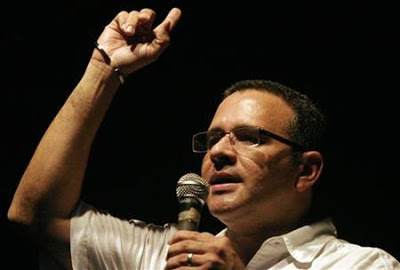 Mauricio Funes, a former television reporter, is the FMLN candidate for president of El Salvador.

It is outrageous to see how a small contingent from the Party of No can contribute to a climate of electoral fear.

[The following is a dispatch from a regular Rag Blog contributor who is writing under a pseudonym due to the sensitivity of the situation in El Salvador.]

I am here as an international observer to an historic election in El Salvador. Before I came here, Rep. Raul Grivalva from Arizona, Senator Bernie Sanders and 31 others signed a letter to the Obama administration requesting that the U.S. remain neutral and support the outcome of the presidential election this Sunday, March 15, 2009. What I have seen here is the way that a few Republicans testifying on the floor of Congress can intervene in that sovereignty.

The front pages of the paper here trumpeted the news that the United States would cut off aid and stop Salvadoran immigrants from submitting remittances to their country. It is outrageous to see how that small contingent from the Party of No can contribute to a climate of electoral fear. The other claim is that the journalist Mauricio Funes from the FMLN party is a terrorist. I was walking in the neighborhood near our hotel two days ago when an airplane dropped flyers over several blocks advertising a documentary. The ad featured Hugo Chavez stabbing his finger at his audience. The ruling ARENA party here is trying to demonize Funes and the FMLN, paving the way for potential violence. Two FMLN activists were murdered last night after they were followed and cornered by a truck full of men.

This is the old El Salvador of death squads and assassinations which our tax dollars supported for so many years. Please pay attention to what is happening here. Call your Congressional representatives and demand that the U.S. remain neutral and support the democratic choice that is made on Sunday. Pressure today has resulted in a statement of neutrality from the State Department, but it is hard to publicize this statement. Read the Huffington Post for more action items