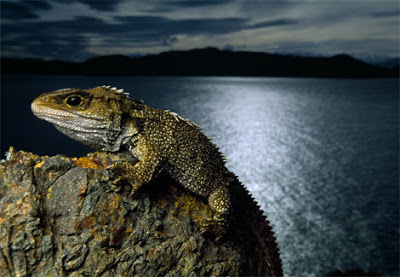 A rare New Zealand reptile has become a father, possibly for the first time, at the age of 111.

The keepers of Henry, a tuatara, had thought he was past his prime – especially after showing no interest in females during 40 years in captivity.

But he mated with 80-year-old Mildred last July and 11 of the eggs she produced have now hatched.

Henry’s keepers have put his newfound vigour down to a recent operation to remove a tumour from his bottom.

Henry arrived at Southland Museum in the South Island city of Invercargill in 1970 and, his keepers say, soon became overweight and idle.

He was known for his foul temper and had a tendency to attack other tuatara – forcing the museum to keep him in solitary confinement for many years.

But since his operation, Museum tuatara curator Lindsay Hazley said he had had a “major personality transplant.”

“I have done lots of eggs before but these are just special because they are Henry’s,” Mr Hazley told the Southland Times.

Tuatara, which are found only in New Zealand, are sometimes referred to as “living fossils.”

They are the only surviving members of a family of species which walked the Earth with the dinosaurs more than 200 million years ago.

The museum now has about 70 of the rare creatures, and Mr Hazley is hopeful that Henry might provide more offspring in the future.

He lives with three female tuatara “in great harmony,” said Mr Hazley, and described the hatching of the eggs as “the completion of a love story.”

Thanks to Dian Donnell / The Rag Blog

This entry was posted in RagBlog and tagged Fauna, Reptiles. Bookmark the permalink.

4 Responses to Family Values : ‘Living Fossil’ Becomes a Daddy at 111